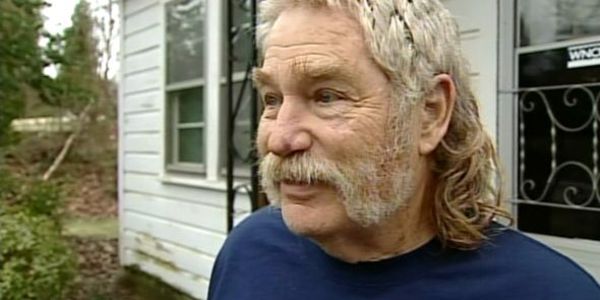 By Diana Rugg / NBC Charlotte ~ HICKORY, N.C. – A Hickory man is grateful to be alive after he said an intruder broke down his front door, and tried to beat him and rob him Saturday morning.

Paul Ohle said he was in his kitchen around 9 a.m. when he heard his front door being kicked in.

Ohle said the man called for help, but as Ohle reached for his phone, the man wrestled it out of his hands.

He “put me in a headlock, drove me to the floor,” said Ohle. “That’s when the battle ensued.”

As the two men wrestled, Ohle said he reached for a single-shot shotgun he keeps by the door. The man grabbed it from him and beat him with it.

Ohle now has nearly a dozen staples on the top and side of his head where he was beaten.
“I was fighting for my life,” he said.

Ohle said he finally broke free and ran to his bedroom, where he grabbed a revolver and shot the man to death.

Hickory police said the alleged intruder was 32-year-old Jonathan Lamar Jordan. They also said no charges have been filed.

Ohle said police took him to the hospital, and also searched his home and took his gun and cell phone as evidence.

“I hate it for the young man’s family,” he said, “but when you do something like that, you get what’s coming to you.”

Moore carries his own gun in a holster on his hip as a crime deterrent. He supports his neighbor and what he felt forced to do.

“It’s a good thing he had a gun or he might have been the one deceased,” said Moore.

Ohle said he wishes he didn’t have to resort to shooting the Jordan, but he did what he felt he had to do to save his own life.

Civilian Use of Force Continuum