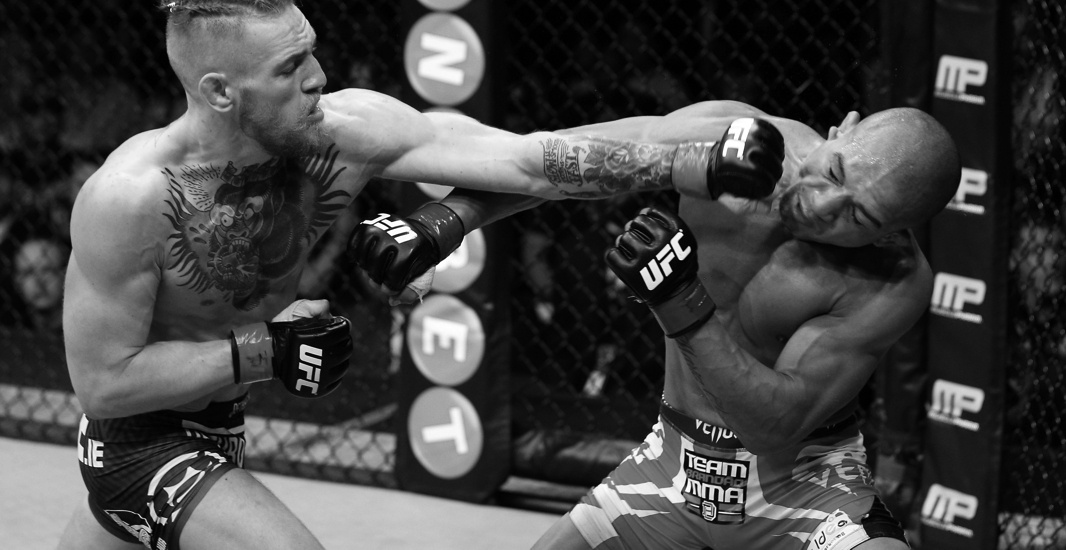 It’s a relatively well known fact that to throw a knock out punch you should put your body into it. This might sound simple enough in theory. Yet, during the years I used to practice mixed martial arts I observed quite a few people understand the idea, but still utterly fail in its application. Here’s a summary of how to throw a knock out punch and a couple of nifty tricks I learned to help get it right.

If you’ve never given boxing or martial arts a try, then let me tell you that throwing a knock out punch can feel pretty good and relieve stress (onto a punching bag, mind you). We’re animals, after all, with active animal aggression. If you’re in a office/computer oriented job like me, it definitely does you good to go at the ol’ bag every now and then. But enough blabbering and on to the meat … so to speak.

Using Your Weight
First, to better understand the idea of using your body weight, try this: Find a heavy object (like a TV cabinet, something that you can move but is heavy). You’re going to push the object, but you’re going to do so while standing completely straight, about 11-12 inches from it, using only your hands to push it.

Okay. Fine, this part’s over. Now, push the object like you would normally. Unless you’re trained in some unknown Navy Seal supernatural method of pushing things, this’ll involve taking a step back to arm’s reach, pushing the object with your hands and leaning into the push at the same time. That’s putting your body into it, and that’s the kind of weight you want to channel into your punch. 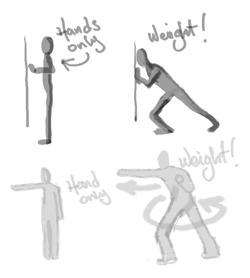 The first push you did, when standing straight and close to the object, was the equivalent of punching using only the muscles in your arm: your body-weight and posture won’t support the impact. While a punch like that is admittedly heavier than a poke, it’s nowhere near as heavy as it could be. If the right posture and shift of weight can move a cabinet, imagine what happens when you apply the same method to throwing a punch.

Actually Throwing the Punch
The way to do that involves some training. And it’s is not like riding a bicycle where you get it right once and you’re all set. It requires synchronization of various body-parts, which takes time to get right.

So, first off, the difference between pushing something and throwing a punch is that when you punch you ’swivel’ your body. Stand straight, one foot a bit in front of you, the other a bit behind (boxing stance, basically). Now imagine that a spear is running right through the top of your skull, through your body and into the ground, holding you straight. That’s the pole you need swivel your body on, and you want to keep that pole as stationary as possible.

Assume you are going to throw a punch with your rear arm (the one that’s further from the punching bag). When you swivel, keep your feet where they are, turn your upper body and allow your rear leg to twist with it. If you’re doing this right, your weight should shift onto your lead leg somewhat. (The spear-through-head is a good helping tool to get the form right, but leaning a bit forward when you do this is acceptable and later on you’ll discover it’s better). Imagine that your arm is just a stick attached to your torso, and the torso is the only thing driving the arm into the target.

Another way to practice this is by getting yourself a stick, like a broomstick, and holding it behind your head with your arms resting on it (like a scarecrow). Try that while doing the swivel. You’ll notice that a large part of your body is moving in sync. That’s the desired effect: You’re turning your body (and its weight) at the same time, swiveling it in the direction in which you’re going to throw the punch. It’s important that the torso, shoulders and rear leg move in sync to channel the weight correctly.

If you find this is still hard to grasp, try imagining that there’s a large bag of cheese (heavy cheese, massive, macho cheese) right behind you on your right, and you’re going to pick it up (keeping your feet in boxing stance), bring it around your front and put it back down on your left side. The weight of the bag would force you to sync your movements in order to maintain balance.

The entire concept of throwing a knock out punch is pretty well portrayed in the video below. Note how his upper body seems to swivel (rather than bend or stay still) in sync with the footwork, driving the arm forward like an arm drives a pool cue.

When you feel you’ve got a grip on the motion itself, move onto a punching bag. When you do the swiveling movement to throw the punch, start by pushing with your rear leg. Kind of thrusting with it to jump start the swiveling motion of your body.

The Wet Towel Snap
This is a bit of an addition, but an important one. I have no special name for it, so I’ll call it the ‘wet towel snap’. You know that nasty trick from childhood when somebody wet a towel, twisted it up and used as a whip? You throw the towel forwards (it’s heavy, as its soaked in water) and right before it hits something, you immediately pull back and the end of the towel will ’snap hit’ what you were aiming for.

The relevance of the wet towel to punching: You’ve learned how your heavy body can channel a ‘momentum’ of weight into your arm. Now you want to use it like a wet towel and throw a punch where your channeled weight is ’snapped’ like a whip. This focuses the power to your fist and ergo makes a very sharp and heavy impact at the precise moment of contact. Knockout. Did you notice, in the video above, that when the person threw the punch his fist seemed to stop moving forward right after he hit the target?

To get the whipping part right, imagine that your target is about three inches behind where it actually is. That’s the point of retraction, or in other words, you don’t want your arm to go much further than that. At that point, the impact will already have been delivered and you’ll simply start pushing. When you practice this on a punching bag, it might seem like not following through further will be less of an impact because the bag won’t swing as much. This is an illusion. Once you’ve got the whipping-technique down, you’ll be able to make the bag swing pretty much without any pushing. You’ll also hear an increasingly deeper (and scarier) thud as your ability to snap-focus the weight gets better.

About the Author
Hrafn Thorisson is the author of Think Artificial and studies artificial intelligence in Reykjavik, Iceland. He would like to make it known that he’s a very peaceful person who doesn’t go around beating people up.