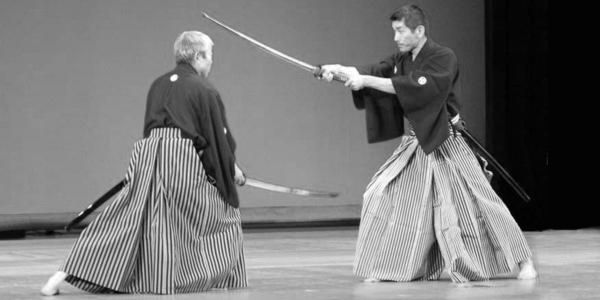 Iaido is the Japanese art of drawing and attacking with the sword. It originated with Kenjutsu and Iaijutsu, although the forms practiced in Iaijutsu are modified slightly in Iaido. Unlike Iaijutsu, which is the art of killing on the draw and was used in real combat, Iaido is much more of a spiritual and mental discipline.

The primary goal of Iaido is to be able to draw one’s sword so quickly that one’s opponent has no time to to act and therefore cannot defend. Practitioners of this art practice drawing the sword for many hours every day. The draw is done at a slow, very controlled pace and consists of 20 movements for drawing and 50 movements for slicing and cutting. All these movements are slightly different.

Iaido is usually performed in solo as a series of kata, and Iaidoka wield a sword not to control their opponent, but rather to cotrol themselves. These kata always begin and end with the sword sheathed. This art is part of the Japanese Kendo Federation but it is not a style of Kendo. Iaido is more of a spiritual discipline than a self-defense art. It combines elements of Zen, Shinto, Confucianism and Buddhism. Schools important to Iaido are Hoki-ryu, Ichiden-ryu, Mugai-ryu, Omori-ryu, Tamiya-ryu and Toyama.

Iai-Do is the ancient Japanese art of drawing the sword and cutting in a single movement. It was created for the physical and mental discipline of the Samurai warrior.

Students are taught Iai-Do techniques for use against single and multiple attackers, even against spear (yari) and armour (yoroi). Iai-Do combines various offensive and defensive movements otherwise know as waza.. They are taught the smooth, controlled drawing of the Katana (sword) foorm its saya (scabbard). They are taught to cut or stick their opponent (Kasou-teki) and then they are taught to remove the blood from the blade before replaciing it back into the saya.

3 Things to Do Instead of Scream at Your Kids