This past weekend marked another milestone in the life of the IFAA Black Dragon Fighting Society. We met for our annual Black Dragon Fighting Society Conference 2013 on November 8 through the 10th, 2013. This was the first year since the inception of the organization without our departed senior grandmaster, head of family, mentor and friend, the late Dr. Lawrence Day. That time was set aside to commemorate his guidance and contributions to the organization. He was and will always be the ‘Keeper of the Flame’. I inherited his position upon his passing in December of 2012. I am no Dr. Day and his are large shoes to try to fill. I can only try to further his wishes as he shared them with me and to try to be a guiding influence in the growth and direction of the organization.

The organization is finally finding new strength and is going and growing now that we are dealing with the loss that so devastated us. It would be Dr. Day’s wishes that we carry on and continue to progress in the direction that he had formally pointed out to us.

This year’s conference was a great success. Much of this was due to the efforts of G.M. Jacobs, Master Smith and the BDFS Fighting Tigers. I have been congratulated for putting on such a wonderful event but the success of the conference rests more with the fore mentioned individuals than with myself. Their dedication and tireless effort made this event what it was. All of the Black Dragons owe them a debt of gratitude.

Secondly I want to acknowledge the participants in the event. Without you guys there would have been no conference. Those that participated took advantage of the many excellent seminars that were available. The seminars included karate, kung fu, tai chi, chi kung, aikido/aikijitsu, aikido, Jiu jitsu, atemi jitsu, kenpo,  Dante ryu combatives, dim mak,  police tactics and everything else in between. All seminars were informative and were well thought out.  The facilitators did a wonderful job of teaching and sharing their knowledge in the time allotted them. There was something for everyone.

The hotel management and staff spoke highly of the organization and its members. They stated that ours was the best group that they ever hosted. Them said that the members were courteous, considerate and polite to staff and all tipped well. They stated that they would love to have us back. I am proud of my fellow dragons and how they conducted themselves.

We had a wonderful bonfire and barbecue on the beach Friday night. The food and the company were fantastic. Throughout the conference consideration and mutual respect was demonstrated. There were no personal agendas or politics displayed during the event. Everything was about brotherhood and comradery. 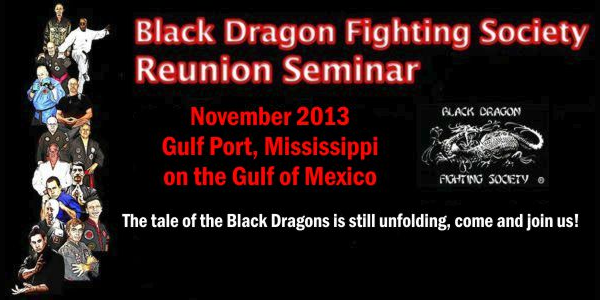 This year’s event contributed to the growth of the organization. A number of members were added to our family; evidence that we are still growing and fulfilling the needs of members of the martial art community.

We accomplished much this year but we still have much to do. We are making the IFAA BDFS a cornerstone in the martial art community. We want to be not just members of that community but leaders.

DVDs of the seminar and highlights of the event will be made available in the very near future. Also BDFS tee shirts are still available from G.M. Ashida Kim/Dojo Press or G.M. Clinton Jacobs/BDFS Fighting Tigers. All proceeds will go toward the expenses of the organization and to defray the costs accrued through the conference.

I’m requesting that all BDFS members like the Official Black Dragon Fighting Society site on face book to enable us to keep in touch and communicate with each other.

Lastly I would like to say that the next event is already in the planning stages. It will be held in Houston, Texas and will be hosted by our masters and grandmasters there. I’m requesting that all members and fellow martial artists plan to attend. It won’t be the same without you.