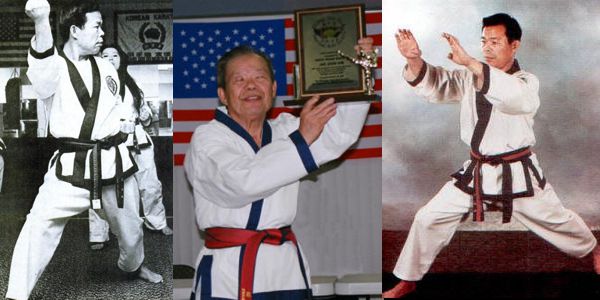 Grandmaster Jae Joon Kim was born in Seoul, Korea in on August 15, 1929. He was the son of a full-time merchant and a part-time Sumo wrestler, who had trained in Japan and won the Korean Sumo Championships. The prize, Grandmaster Kim recalls, was the traditional one – a live cow. 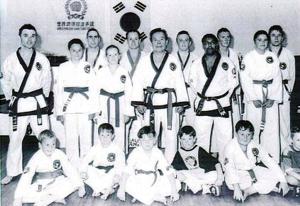 An avid sportsman and athlete, the elder Kim wanted his son to master a “manly” sport. In 1945 he enrolled his son in a Western-style boxing club. He was a good student, winning eleven of his fifteen bouts on the Korean amateur circuit (similar to our own Golden Gloves). Two events, however, led to a road he has traveled ever since. In his fifteenth bout he knocked out his opponent and the boy, a friend, lay unconscious for twenty minutes. “I thought” Grandmaster Kim remembers, “that I had killed him.”

Through the years, Grandmaster Kim has toured the world for exhibitions and has trained Master Instructors in Europe, Asia, North and South America and South Africa. Along the way he has found time to train and promote Chuck Norris, Pat Johnson and World Heavyweight Boxing Champion Leon Spinks. Grandmaster Kim also instructed Detroit Mayor Coleman Young’s bodyguards. His selfless contributions to the community have resulted in numerous proclamations from mayors around the country.

Veteran martial artists will recognize that Grandmaster Jae Joon Kim holds one of the highest ranks in Tang Soo Do in the world: in fact his Dan Number is #38, which was awarded by Grandmaster Hwang Kee (the founder of Tang Soo Do.) For over 50 years Grandmaster Kim has been a devoted teacher and inspiration to all who come in contact with him.

Grandmaster Jae Joon Kim has continued to develop World Moo Duk Kwan Tang Soo Do, which now stretches its way from California to New York and from Michigan (where the main club started) to Florida, the present world headquarters of the World Moo Duk Kwan Tang Soo Do Federation. Grandmaster Jae Joon Kim travels to all four corners of the United States and around the world, conducting tests and seminars to further the expansion of the Federation. Along with his three sons, Nam, Saul, Eric and his daughter Shim (all masters and instructors), Grandmaster Kim will continue to develop the Korean Art of Moo Duk Kwan Tang Soo Do for all. He will ensure that his students and his instructors receive the finest instruction possible.

Grand Master Jae Joon Kim passed away on January 09, 2007, in Brandon, Florida from complications due to lymphoma.