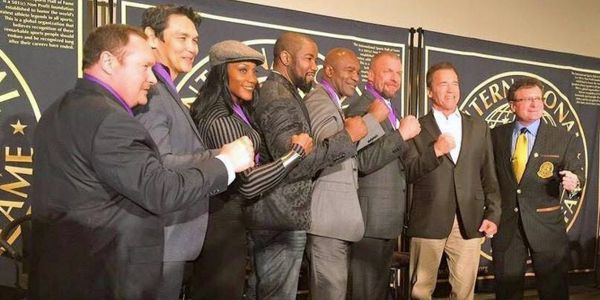 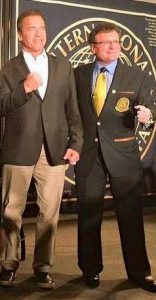 Over 100 members of the international press and legendary World Champions from numerous sports enjoyed the once in a lifetime experience of watching world famous sports icons and Hollywood action stars while they were inducted into the International Sports Hall of Fame 2015 held at the Arnold Schwarzenegger Sports Festival on March 7, 2015. This years inductees included martial artists Don “The Dragon Wilson and Michael Jai White. Here is the full list of inductees:

Over 200,000 attendees in over 50 sports and over 20,000 competing athletes experienced the amazing Arnold Sports Festival weekend, its jewel, the International Sports Hall of Fame induction ceremony honored some of the world’s greatest athlete legends in all sports 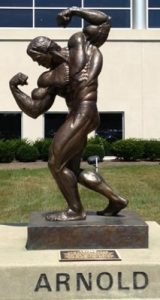 Robert Goldman was honored as the sole sponsor of the International Sports Hall of Fame and those champions attending. He also sponsored the America’s Next Great Trainer $15,000 Challenge prize. Dr. Goldman also sponsors the USA Arm Wrestling World Championship and the After School All-Stars. This was a MUST NOT Miss weekend for all. In 2012 Dr. Goldman donated an 800 pound bronze statue of Arnold Schwarzenegger to the city of Columbus and the Arnold Schwarzenegger statue has been moved to the front of the Columbus Convention Center allowing attendees of the Arnold’s to get great photos.

Candidates for the International Sports Hall of Fame 2015 were chosen not only for their athletic accomplishments, but also for their charitable works and mentoring of young children.

The International Sports Hall of Fame headquarters, are housed at the world’s largest physical culture museum at the University of Texas, Austin, the Stark Center.

About The Arnold Schwarzenegger Sports Festival

The Arnold Schwarzenegger Sports Festival is the largest such event in the world. It has over 175,000 attendees and 18,000 competing athletes (twice the size of the Olympics). The event is hosted by Sports Hall of Fame Founder Dr Robert Goldman and Governor Arnold Schwarzenegger. Over 800 members of the international press are invited annually, as well as select world champion athletes and past International Sports Hall of Fame Inductees.

USAdojo - August 21, 2010
We use cookies to ensure that we give you the best experience on our website. If you continue to use this site we will assume that you are happy with it.OkRead more