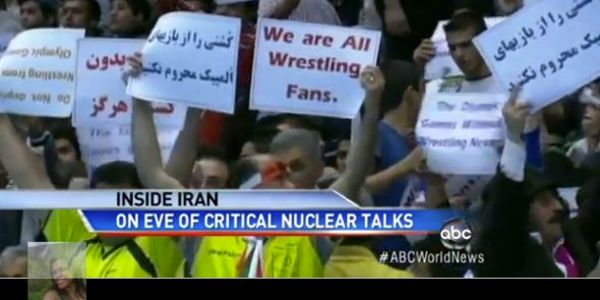 Tehrān : Iran | Feb 25, 2013 at 9:52 AM PST By northsunm32 for Allvoices ~ The U.S. and Iranian authorities have chosen to cooperate on wrestling in the Olympics 2020. This is a rare joint effort to have wrestling remain as a sport in the Olympics in 2020.  Wrestling authorities from the two countries have chosen to cooperate in an attempt to reverse an IOC recommendation that the sport no longer be automatically included in the Olympics. Iranian and US teams met in a freestyle wrestling competition in Tehran. As you can hear on the video the US wrestling champ was cheered by the crowd. President Ahmadinejad makes an entrance during the match.

The executive director of USA wrestling, Rich Bender, was in the Iranian capital Tehran. The Iranians were hosting the World Cup men’s freestyle tournament on Thursday and Friday of this week. Bender said:“We need the backing of Iran and Russia… to preserve the wrestling, and this goes beyond politics… Iran is one of the powers in wrestling and can defend the game’s credibility.”Bender, who was speaking at a ceremony hosted by the Iranian Wrestling Federation, said that he hoped that with comprehensive unity among all the wrestling power houses the IOC would change its decision. Hojatollah Khatib, who is head of the Iranian Wrestling Federation said that he also hoped that the unprecedented unity among the groups would change the IOC decision.

Hegedus Csaba, who is a member of the International Federation of Associated Wrestling Styles (FILA) sent a message to the IOC that everyone was united and that this will force the IOC to bring wrestling back into the Olympics. Csaba said: “I am very happy that Khatib and Bender had very friendly meeting. This shows that we have a common language and that is wrestling.” Just last week, the IOC executive board had voted to drop wrestling as a core sport at the games and consider it an additional sport along with seven others to be selected as an additional sport. The board is to meet in May to consider presentations by supporters of the different sports and choose one to recommend to the full committee this September.

Wrestling is one of the few sports that survive from the original Olympics in 708 BC into the modern era. Only once has wrestling not been in the Olympics and that was in 1900. Wrestling has a long history in Iran. Persian kings would battle their opponents. Tens of thousands of Iranians actually take part in the sport and millions attend matches. Women however are forbidden to wrestle in Iran. As seen on the video, the Americans had trouble getting a female reporter in to the matches.

International Olympic Academy president, Isidoros Kouvelos, has asked the IOC to respect the historical aspects of the sport in the Olympics and retain wrestling as a core sport. The agreement on wrestling issues perhaps can be used as a model to tackle other issues between the two countries.

northsunm32 is based in Brandon, Manitoba, Canada, and is an Anchor for Allvoices.