This was not the first call I had to deal with where men watched women from a distance, committing lewd acts. Most of the time the victims have no idea of the crime, or even the presence of the suspect.

When I was a police patrol officer serving the Costa Mesa Police Department I received a call of a man masturbating in his vehicle in the parking lot of a fitness club as women passed by at a distance going in and out of the club. He was trying to hide his activities, but one woman who was parked near him happen to see him first when she looked inside his car as she was passing from behind his car and into the club. As soon as he saw her he turned on his engine and drove out of there to get away. Fortunately, she gave a good description of the car and I was able to pull him over a few blocks later. I arrested him for lewd acts.

This was not the first call I had to deal with where men watched women from a distance, committing lewd acts. Most of the time the victims have no idea of the crime, or even the presence of the suspect. There are some men, “flashers” who will present themselves before the victim, open up his coat or pull down his pants and expose himself, and that is rather shocking, but fortunately nobody is hurt physically. Of course, the best thing to do immediately after the crime has been committed is to call the police and report the crime. Not only are you making the criminal pay for the crime he is doing to you, or another, but you may be preventing a worse crime in the future.

Onto the next story. One night I was on patrol and I got a call from the dispatcher of a man peeping in the window of a woman and her daughter. I just happen to be down the street in my police car when the call came out. Within seconds I was driving up to the location blacked-out and saw a man running from the yard of the woman who reported a man looking into her window. I came to a skid, leaped out of my patrol car and went of foot pursuit through people’s front lawns. When I grabbed the man trying to flee from me he tried to fight me, but I managed to throw him to the ground while grabbing his jacket. With a violent tug I grabbed the edged of the man’s jacket and along with the material inside my fist was a hard object inside the man’s jacket when he slammed into the ground. The object, a large fixed blade kitchen knife, just happened to stay in my hand as the suspect went down. Miraculously, I had the weapon by the handle. It had been totally by accident that I grabbed the weapon like that, as I didn’t even know he had it on him during the struggle. I ran my knee into his back and forced his face into the grass. Just at that moment Officer Hamel ran up and assisted me. Officer Hamel stood him up for an In-Field Line Up (a light shining on his face while handcuffed for a witness to identify him). Officer Hamel stayed outside and I went in to the small house to speak with the woman who had reported the crime and her 12-year-old daughter. The 35-year-old single mother, was quite attractive, said that she and her daughter were watching T.V. and she noticed a man looking into the living room window at them. When she looked in his direction he took off running, and that’s when she picked up the phone and called the police. When I took the woman to the location where we had the prisoner standing on the sidewalk I had her get a look at him from my patrol car, but he could not see her with the light shining in his face. In shock she said, “That’s my gardener!” 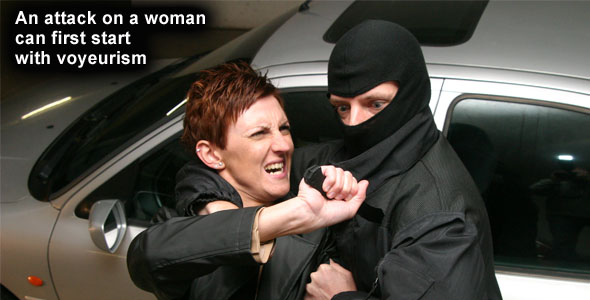 Later I read the suspect his Miranda Rights and he volunteered to talk with me. I asked him to tell me how long he had been peeping into his employer’s windows. He said, “For a few nights.” I then asked him what he was going to do with the knife in his jacket. To my surprise he told me in a matter-of-fact manner that this was the night that he decided he was going to break into his employer’s house and rape her and kill her. I couldn’t believe he was telling me this, but I was calm and asked him for more information. I asked him what he was planning on doing with the little girl after he was finished with the mother. He told me, “I hadn’t decided that yet.”

Many times voyeurs, “peeping Toms,” do not go beyond looking at their victims in secret, however, some want to materialize the fantasy, like the gardener I had tackled and arrested. It was one of those rare times as a police officer that I was at the right place at the right time, and by catching him that night I, and the other officers, saved this woman’s life from a future attack, for she did not get a good look at his face when she caught him looking through her window, and he would have come back another time.