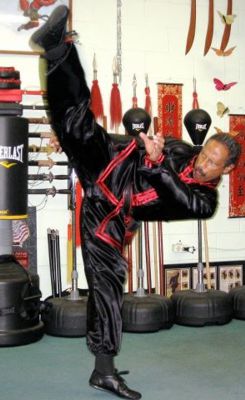 Grandmaster Jim Muse Furtado has been studying the martial arts since 1973. He learned the Tai Shing Pek Kwar monkey style from America’s only Monkey King Master Paulie Short. Tai Shing Pek Kwar monkey style dates back to the end of the Ching Dynasty 1644 – 1911. It is a very “rare” yet a very, very effective fighting system. Training with Master Paulie Zink was rough and demanding. They only studied two days a week, but classes would start at 8:30 in the evening and often ran until for in the morning. Students had to have great discipline and an even greater desire to train.

Jim Muse Furtado also studied “Taoist” Yin/Yang Yoga and Chi-Kung from Master Zink. Grandmaster Furtado goal is to spread the art in the traditional way he was taught by Master Zink.