NAIROBI, Kenya – A two-finger poke to the eyes, a punch to the solar plexus, a kick to the groin, then turn and run, the instructor barks.

But this is not your typical self-defense class. The trainer is an elderly Kenyan woman who is teaching her peers how to combat a spate of rape attacks targeting elderly women in the slums. One Nairobi hospital treated 437 rape victims older than 60 last year.

In the sludge-covered alleyways of the Korogocho slum, 50 women, many of them grandmothers, have enrolled in twice-a-week self-defense classes at a run-down community center. The women say they must rely on themselves because the police rarely patrol the dark paths that wind through the maze of iron-roofed shanties. When suspected rapists are reported to the police, they often bribe their way to freedom, the women say. 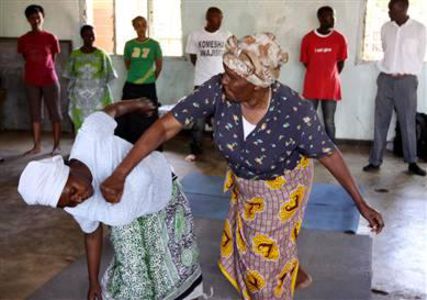 At the Korogocho community hall, elderly women clad in headscarves, long skirts and petticoats pound punching bags with the heels of their bare feet.

“No, no, no!” screams 70-year-old Mary Wangui as she pounds the heavy hitting pad. Her open-palm blows force a 20-something instructor, Sheila Kariuki, to fall backward. A group of around 30 women between the ages of 50 and 80 cheer on Wangui as they wait their turn.

“When we hit the pad with an open palm we are training to target the nose, the solar plexus or the groin to hurt an attacker so that it can give you a chance to escape. Shouting ‘no’ repetitively is meant to draw the attention of people so that they can assist you,” said Wangui, who has been training for almost two years.

“Don’t feel any mercy. Was he coming to read the Bible with you?” Kariuki asks the women.

‘Life here is not good’

One of the causes of elderly rape is a belief by criminals that intercourse with an elderly woman can cure them of AIDS. Others think that raping an elderly woman will cleanse their sins after committing crimes, Kariuki said.

Ten elderly women have been raped and killed the last two years in Korogocho, but no suspects have been arrested, Kariuki said. Many other rapes are believed to have taken place but not reported.

Elizabeth Olwenya is a grandmother to four children under the age of 5 who were orphaned after two of Olwenya’s daughters died of AIDS. The 55-year-old Olwenya was one of the first to take the self-defense classes three years ago, and said the skills she learned help protect her grandchildren.

“The life here is not good. People here can rape you and even your child,” said Olwenya, a widow.

Dr. Jake Sinclair, a founding member of Ujamaa, a non-governmental organization that helps rape victims and holds the self-defense classes, said many class members are grandmothers motivated by the fact that they are raising their children’s children. The classes can provide protection for both generations, he said.

For the orphans to have a chance of success in life, the grandmothers must be given skills and capital to start small businesses, Sinclair said. High crime rates threaten income-generating activities.

“If they lose that, they have nothing,” he said. “In most cases, the mothers and the fathers have died of HIV and if the grandmother cannot support them or protect them, the kids will end up on the streets or the Kenya youth authority, which is like prison. If they end up on the streets, it is prostitution or thuggery.”

Through a grandmother’s care, the children have a chance to finish their education and break past the barrier of poverty, he said.

1 in 5 rape victims is elderly
The Gender Recovery Center at the Nairobi Women’s Hospital treated 2,357 victims of rape last year. Of the 1,118 adults who were victims of the crime, 223 women over the age of 60 — almost 20 percent of the victims, said the center’s monitoring and evaluation officer, Lillian Kasina. National crime statistics are lower than the hospital’s numbers, because of the stigma of reporting rape.

“Many of the reporting desks at police stations are manned by men who see rape as a crime of pleasure rather than seeing it as a crime that violates women’s dignity,” said Harun Ndubi, a human rights official with the group Haki Focus.

A national police spokesman, Charles Owino, said that reports of rape in general rose in 2008 and 2009, although he would not release statistics. He said the increase is because of more awareness of the crime and the introduction of stronger laws against sexual offenders.

Owino said the allegation that police do not act on reported cases could be true, and that if a police officer ignores a complaint, the victim or her family should talk to someone higher up the chain of command. “You can go all the way up and talk to the police commissioner,” Owino said.

Julia Karinge, who is in her 80s and gets assistance from Ujamaa, said she has been raped twice.

“I did not resist either time because I did not want to die. They killed a friend of mine and dumped her body outside my house,” said Karinge, who is not taking the defense classes.

No arrests were made, though she reported the crime to police and could identify her attacker.

“You need to pay them to get them to do anything,” she said.

Copyright 2010 The Associated Press. All rights reserved. This material may not be published, broadcast, rewritten or redistributed.