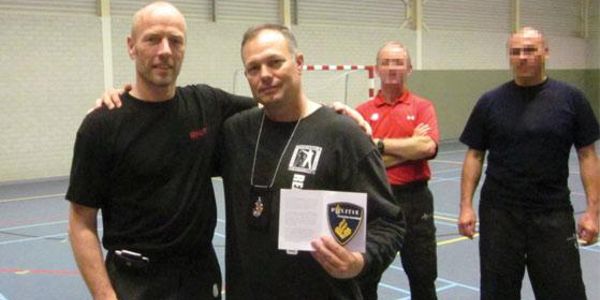 Amsterdam – Jim Wagner was made an honorary police officer of the Amsterdam Police Department in Holland by the instructor cadre of the Academie Politie Amsterdam Amstelland on October 8, 2010. Wagner has been writing for USAdojo.com for ten years.

This marks the third in a row that Jim Wagner has been invited by the Dutch police to contribute to their official yearly training program of over 3,000 police officers. In 2008 Wagner taught Defensive Tactics from his Reality-Based Personal Protection system, in 2009 it was Knife Survival for the “Mes Program 2010,” and this year the subject matter was Police Baton for the 2011 training year. Wagner has been invited back next year for his input on a program designed to maximize performance of police officers under stress of physical injury or death in combative situations.