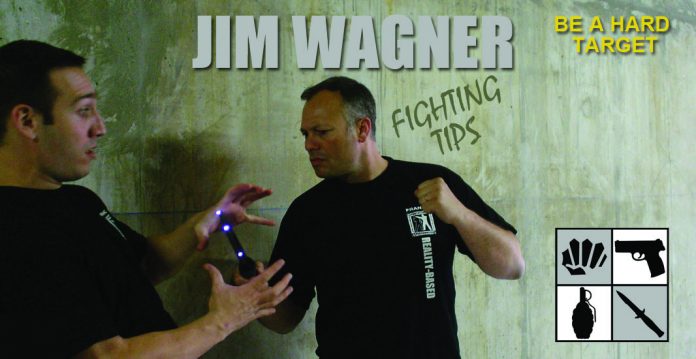 This article discusses Jim Wagner’s 10 Rules of Combat based on his observations of the key elements to surviving actual hand-to-hand combat.

My uncle once told me, “It is easier to be a doctor than a car mechanic. Doctors only have two different models to repair, but a mechanic has to know how to repair hundreds of models.” This observation is humorous if you’re a mechanic, but we all know that a human being is infinitely more complex than the most sophisticated vehicle. Although the typical human has only one head, two arms, two legs and a torso, it’s the human brain, which directs the body to work in order to accomplish a wide variety of tasks. One possible task is to engage in conflict with other human beings.

Regardless of the complexities of the brain, with all of its multi-layered motivations and creativity to wage battle, the average human is still limited to what work (techniques) can be performed while fighting since we are limited physically by one head, two arms, ect. Because we are limited physically, there will always be similarities in hand-to-hand combat, regardless of what part of the planet you live on. In other words, there are “universal truths” in real combat, just as there are universal truths with vehicles; a vehicle functions no differently in Africa as one does in Asia.

As a former soldier, and a police officer of 15 years, I have experienced my fair share of combat. My martial art skills have been put to the test on a number of occasions. Plus, a Defensive Tactics instructor from some of the most elite police and military teams of the world, I have trained with literally thousands of men and women who have “tasted” real combat. I have also been a devoted martial artist for 28 years  from tradition, to sport competition, to reality-based, and everything between. Though these experiences I have discovered that those who have actually had to rely on their skills for survival tend to train the same, use similar techniques, and think the same (like-minded) regardless of their geographical location. What has resulted from my observations are 10 rules that I believe are the key elements to surviving an actual hand-to-hand combat.

These are Jim Wagner’s 10 Rules of Combat:

As I mentioned before, these rules are based on my own experiences, and those who have successfully survived real encounters. If you agree with my 10 rules, adopt them. If you don’t then write your own down and evaluate them. Every professional warrior has a written form of their rules of engagement, and every unit lives by a motto. You need to know yours before you “engage” the enemy. Deciding what you believe, and how you should act during a battle maybe a little too late.

The Five Levels of Force