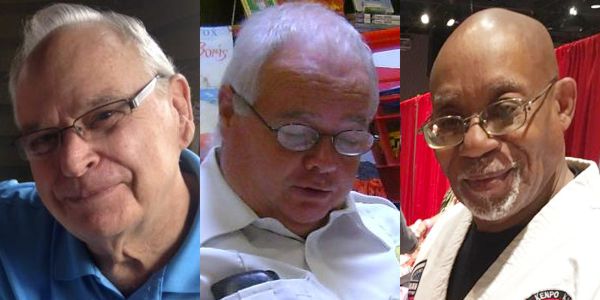 At the age of seventeen I began studying Judo. Small and slight of build, but with an acumen for basketball none-the-less, I was finding it necessary to defend myself on the basketball court when bigger players became frustrated with me and began to rough me up when simply guarding me proved ineffective. I had grown to love the sport of basketball with its balletic grace, its planes and angles and mathematical symmetries and I was determined to keep my place on the court even if I had to fight to do so. At long last I had found something “worth fighting for”. The rub was that I was having to fight just to keep my place on the court  and I was losing due to my relative lack of size. I had never been a fighter anyway. So my older brother persuaded me to begin studying judo and he knew a co-worker who belonged to a local judo club where we lived in the area of Norfolk, Virginia.

Somewhere in about the middle of nineteen-sixty-eight I started attending judo classes at the Tidewater Judo Club, then meeting two weeknights a week for two hours a night at the Norfolk Central YMCA in downtown Norfolk. And that is where I met Senior Sensei and club founder Don Schneider, a big young bull of a guy who, it turned out, was one of the most unique and accomplished Judokas of his era. 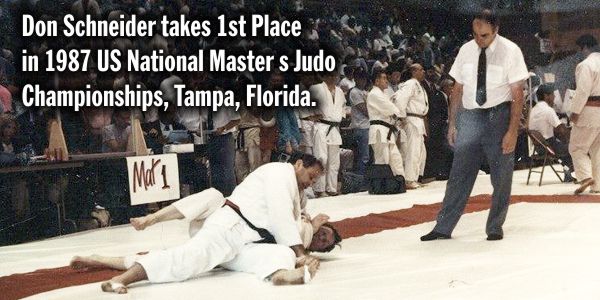 For the next three years I studied Judo there in that Dojo and primarily under Sensei Don’s tutelage. I lost a lot. And the material came hard to me. Wish I could tell you I had an acumen for it, but I did not. What I DID develop, over time, was a love for the sport of Judo—and that would prove key. Eventually, Sensei Don was willing to meet me before class on those two days a week. As soon as I could possibly get to the Dojo after school, he worked with me, one-on-one. Sometimes he would even indulge me a quick game of one-on-one basketball before we got down to Judo. That was always a treat for me. He was a pretty good basketball player, too. Then came the Judo, and he would patiently work with me to improve my techniques, my sense of discipline and everything else. And he did this often over a pretty good period of time. I fought a couple or three tournaments, without much success I might add. But somewhere deep within me something must have been happening, because years later, even after I had slowly drifted away from Sport Judo, I had occasion to use it in my personal life. I used it against a soldier, a larger and more powerful opponent, in a barracks fight  after he jumped me for no apparent reason. I used a throw called Tai O’Toshi to thwart his attack. I would use that same throw again in a similar situation against another soldier about a year later, to good effect.

Over the years I drifted completely away from the formal study of Judo, but did continue to get books about it and read them and to occasionally work-out some in Judo on my own. And, again, over the years, I had one or two more occasions to actually use my Judo training in self-defense.

More than thirty years passed, and I was in my early fifties and living in Arizona when I met another greatly accomplished martial artist, Hanshi Donald Miskel. I began studying a variety of much more combative martial arts under his tutelage. By then the idea had long been in my mind that I should sometime try to contact my old Judo Sensei and thank him for all the time and effort he had invested in me and to let him know that it had, indeed, been to some benefit to me. In fact, on my trips back to the Norfolk area to visit family and friends, I had tried on several occasions to do this, but with no success. With the advent of the internet, my efforts still all turned up empty. In 2007, my old girlfriend Debbie, whom I was visiting in the Norfolk area, and I walked from Norfolk’s “Waterside Marketplace” all the way to the Central YMCA on yet another fruitless search mission trying to locate Sensei Don Schneider. It was a warm summer day and she was in heels. As I remembered it, it was but a short walk. Turns out, at seventeen, it was but a short walk. At fifty-six, for me, and with her in her forties, it became “Sensei Trek—The Search for Don”. And it was a fruitless trek—as had been all the other attempts I made at re-establishing contact with Sensei Don Schneider.

Fast forward now to a few weeks ago. I had been writing articles on judo for Dana Stamos’ USAdojo.com for a little while. I hold now a second degree black belt in Dante Ryu, Goju Te AiKi-Jitsu and a second degree black sash in Shaolin Chin Na, but have been writing on Judo because I started in Judo and even Sensei Miskel recognized that I am first and foremost, a Judoka. He even introduces me to people as a Judoka. Though I have studied other disciples under his tutelage and have even become his Uschi-Deschi here in the Southwest United States. My first article for Ms. Stamos’ dealt with Judo and my early experiences with it under Sensei Don Scneider’s teachings in the Tidewater Judo Club.

Recently Martial Arts Magazine picked up that article, written about year ago, and published it in a recent edition of their magazine. Sensei Schneider read the article and was able soon after to find me on Facebook. Since then we have been in almost daily contact with one another, either by e-mail or through frequent telephone conversations. I have, at long last, been able to say the “thank you” to him. We have picked right up where we left off more than forty years ago. And he has resumed teaching me, in a “gentle way”, as well—helping me to make the transition in my own mind, from being strictly a student of the martial arts, which I had been for so long under his and Sensei Miskel’s teachings, to becoming a teacher in my own right, since Sensei Miskel recently returned to his native Chicago due to a prolonged illness. I am now finding that I have people—usually young people—approaching me, strictly on the basis of observing me, asking me to “teach” them whatever it is that gives me the “serenity” they say they sense in me even when I am under duress.

“Gentle Way”. It is, of course, what the very word “judo” literally means. As in judo itself, I found myself re-united with Sensei Schneider when I ceased trying so hard to find him, and simply went about my business in a gentle way. I was brought back together with him in the natural flow, or Tao, or “way” of things. It has been a most happy reunion.

Transitions, From Student to Teacher

John Wallace - August 5, 2012
We use cookies to ensure that we give you the best experience on our website. If you continue to use this site we will assume that you are happy with it.OkRead more