If you stick to the center mass principle you’ll be a lot more effective because it simplifies target acquisition in your mind, and this equates to faster reaction time and realistic expectations.

The public seems to think that a police officer should be able to shoot the gun or knife out of the hand of a criminal in a life-and-death situation. As a police officer I’ve actually had to respond to a few hostage situations and have heard the words from a naïve citizen, “Why didn’t you guys just shoot the weapon out of the man’s hand?”

Anyone with any gun skills knows that shooting a weapon out of somebody’s hand in a fluid combat situation is next to impossible. It looks good in the movies, but it’s just not going to happen in real life. First of all, the target is too small, moving, and very difficult to hit. If the police officer misses such a shot, and most will, the hostage’s life is in jeopardy. In fact, even highly trained Special Operations police officers would miss striking the hand if that were the target. 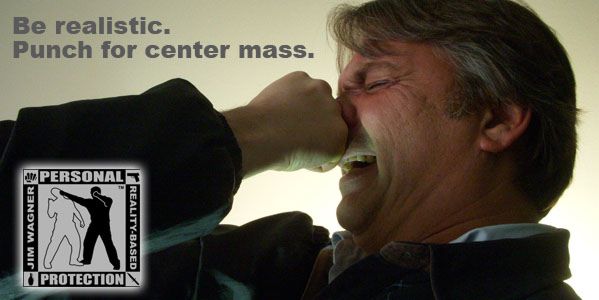 Police departments around the world teach their police officers to aim for center mass. The term “center mass” means just that; aiming for the mass of the target, and when the criminal is standing upright that usually means the center of the chest. If the criminal is kneeling down with his side to the police officer center mass would be right around the lower rib area. The reason center mass is targeted is because shooting requires a great deal of skill, and in a combat situation the police officer tries for the center, and in a very fluid situation hopes that the bullets will strike in the general area. They aim for center mass, but with the movement of the criminal the bullet could strike further away from the aim point. That’s acceptable as long as the bullet strikes the body and hopefully stops the criminal’s attack.

Ever since I joined the United States Army when I was 18 years old, and even as recently as three months ago qualifying with the M9 pistol for my military police unit, I have always qualified as EXPERT with the standard weapon systems (assault rifle and pistol). If someone told me I had to shoot the weapon out of the hands of a criminal or terrorist with my pistol I would tell them that they are crazy. Now, a sniper may be able to pull it off if the target is within 100 meters, not moving the hand at all, and there is a suitable backdrop. Other than that, forget it!

Along the same line of thinking, there are many martial arts instructors teaching their students that they can punch on precise pressure points of the human head when in a real physical confrontation. Mind you, the opponent is moving, blocking, and trying to tear your head off as well. Instructions like those are just like those people who say you should shoot the weapon out of someone’s hand. Real combat is fluid not always as sterile as the training hall, and landing a punch anywhere on someone’s head in a real fight may be all you get.

I don’t tell my Reality-Based Personal Protection students the exact spot to punch when striking the head. I don’t say, “Go for the tip of the nose!” or “Hit him on the jaw!” like I remember my traditional-based and sport-based instructors telling me. Rather, I teach them to just go for “Center mass!” If they go for the center of the mass they are bound to land the punch somewhere on the head as the fist and fur is flying. Even when I am teaching an eye gouge for deadly force situations, and the eyes are quite a precise target, most students can’t succeed in a realistic scenario unless they place the palms of the hands on the opponent’s ears and then the thumbs can find their way into the eye socket from there. With movement, blocking, an attacker’s own self-preservation instincts a lot can go wrong in a real fight, and that’s why I stick to sound principles. 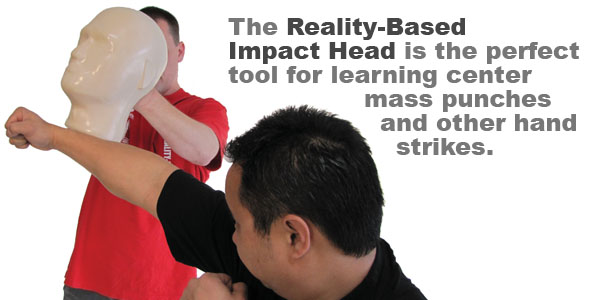 One of the best tools I have found for center mass head strikes is using the Reality-Based Impact Head invented by Ray Long out of the Chicago area. Years ago I replaced the unrealistic flat round nylon and leather focus gloves with the superior Reality-Based Impact Head (www.impacthead.com) that is the actual shape of a human head and is held with a handle just like a focus gloves. When the holder moves, the head moves, and students quickly understand why center mass is the goal on a moving target rather than specific target points. 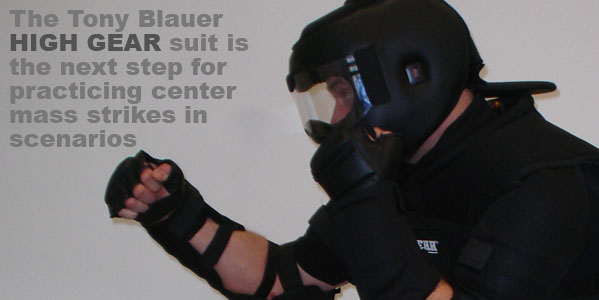 The next step up is to have my students strike at an opponent wearing protective gear. What I use in my main school is Tony Blauer’s High Gear (www.tonyblauer.com). The helmet provides full protection and a clear field of vision. You can’t go full contact, but you can go hard enough to learn how to perfect the targeting of your punches in real-life scenarios. If my students are not doing center mass punches to the head then they are doing eye gouges and face claws against the thick plastic visor that protects the opponent.

Then of course there is real life. If you are training realistically you will react realistically in a real conflict. When I’ve been in real fights against criminals, whether in a shooting, baton strike (obviously for a large muscle group), or a punch my military and police training of always going for center mass has paid off. If you stick to the center mass principle you’ll be a lot more effective because it simplifies target acquisition in your mind, and this equates to faster reaction time and realistic expectations.

Filipino Kali is Alive and Well in Today’s Police and Military...