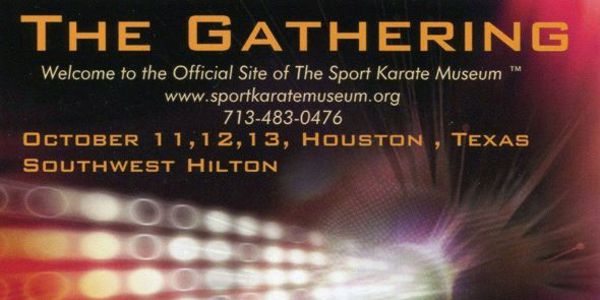 What are you doing in October of 2012? I can tell you what you should be doing. If you are a martial arts practitioner or a fan of the martial arts October will be a very important year with opportunities to meet some of the masters, pioneers and great competitors in the martial arts. Two events will be taking place back to back. I have already written on the Black Dragon Reunion in early October but it doesn’t end there. That is just the beginning of a month that will go down in martial arts history in the United states. In these two events an interested martial artist will have an opportunity to rub elbows with some of America’s martial arts greats.

In October from the 11TH to the 13TH The Gathering will take place in Houston Texas. It will be more than the usual get together that has taken place from time to time in martial arts history. It will make history because it will do what no other get together has accomplished in the past. It will bring together two polarized groups that have been at odds since the sixties and seventies. A feud, by the way, that separates the two groups to this day.  On one side you have the traditional group. This group includes the point fighters and light contact group. On the other you have the dojo bangers. That will include the hard core blood guts and gore fighters that see the martial arts, karate in particular, as a strictly combat system. From the latter group were the first practitioners of real no holds barred sparring and mixed martial arts for combat. The two groups met in the middle, philosophically at least, when full contact karate and kick boxing became a part of the mainstream.

These two groups have been circling each other like combatants on a school playground for years. Mutual suspicion and distrust and open hostility has separated the two groups for decades. It is my hope and the hope of many that these two groups will narrow if not completely destroy the rift that separates them.

This historical idea is the brain child of Gary Lee of the Museum of Sport Karate. His knowledge and acquaintance with some of the representatives of both groups fostered the idea of bringing them together in one place. How well this will work remains to be seen. My hope is that the two factions will meet in mutual respect and iron out the differences that separate them and if not to agree to disagree.

The gathering will honor fifty years of sports karate and the competitors that made this time historical in the martial arts. Many of the masters and champions of that era will be there and many will be honored at the event.

Another first will be presented at this event. A black belt exam will be  streamlined online by Watch Me Sports. I’m told that candidates for fourth, fifth and eighth degree black belts will be going up for rank. Some of the most respected martial arts masters in traditional karate will be sitting on the review board. That alone will make this gathering historical. I have heard also that many of the seminars and demonstrations will be aired also.

So what will you be doing in October? You have any number of choices. In my opinion the BDFS reunion in Kentucky is one option. The Gathering in Texas is the other. I don’t know about you but I plan to be there for both. Both are too fantastic to miss if you’re a sincere martial artist, regardless of what school of thought you are a member of. It would be a pity to miss either or both. Be there or be square. History is in the making.