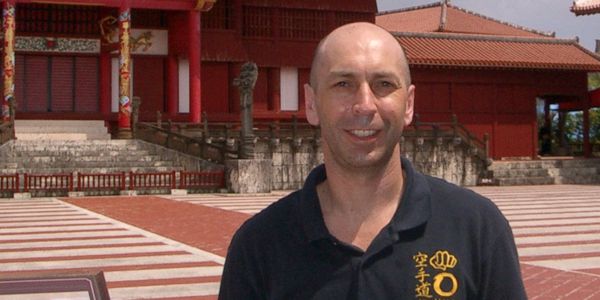 What is it like to test for a belt in Japan as a Westerner? Or to live with a Master? This article will try to provide brief insights by reflecting on my time in Japan between 1995 and 2002. I will also reflect on short-term visits to Japan made by my Californian students to test for a Dan ranks. I was fortunate enough to have spent part of my time in and around Japan as an “uchi-deshi” – a live in student of a master. On arriving in Japan my comparisons of East vs. West martial arts came from a somewhat experienced viewpoint since I had already been training in Japanese martial arts for more than 10 years, competed at an international level, and had my own dojo operating in California.

Karate in Japan takes all sorts of forms: some are sport oriented, and some are very traditional, some are very hard, while others very soft. By comparison to the West (with the USA and Australia being 2 other places I have had significant karate exposure) karate intensity is often similar, however, the style in which it is taught is more varied both from a traditional/philosophical viewpoint and technical approach. In particular I have found that the emphasis on sport Karate in Australia is very high, leaving the art, and the practical application to the side (I have recently opened two dojo(s) in Australia). I don’t feel sport karate is bad, but to simply state that it is a different path compared to the art of karate. Given Australia’s recent performance of fourth in the Olympics, even given a very small population, one could expect such a sporting oriented nation to predominantly follow a sporting oriented approach to karate (not to say all Australian Karate is sport as there are obviously also a proportion of traditional dojo). From my involvement in the US karate scene I feel that, compared to Australia, it has a larger proportion of dojo(s) continuing to pursue traditional Japanese karate. As an example of this measure I often look at the content of Ippon Kumite, Kata Bunkai and Ippon Shobu (a single point sparring match) practiced in a dojo. In Japan these things are not only seen as a regular part of classes, but appear as the primary content (especially Ippon Kumite). Approaches such as Ippon Kumite and Ippon Shobu for matches (instead of six or eight point matches) reinforce the precept behind Japanese Karate of “one hit one kill” (Ikken Isatsu in Japanese). The underlying theme of these one point bouts is the concept that in the kumite bout, like in life, you only get one chance. I once asked the Master I lived with in Japan (Uetake Sensei) with why he considered Kobudo (weaponry) an important extension of his Karate as it dilutes the time one can spend mastering the Way of empty handed fighting. He replied that it reinforced his mindset that one hit is one kill. So if traveling to Japan expect Ippon Kumite to often be large part of each night’s training with the key point being mind state re-enforcement.

Fudoshin (immovable mind), is a “Zen” principle related to the above point of absolute technique, and I would like to give an example of another way in which it is reinforced in Japanese training. Most of my training was in Japan was at a honbu dojo where, on a given night, there would be two 8th dans, three 7th dans, and just a few other instructors in rank range of sandan through godan. In these sessions there was a surprising element to the content we practiced given the ranks in the room – it was almost entirely kihon and ippon kumite, with kihon being 50% of training. After a few years of banging out full power basic technique with a group of masters you realize that the perfection of physical technique is not the only reason for the high repetition: the point was the continual reinforcement of the mindset that each technique, if a block, will break their opponents arm, and if a strike will kill the opponent – not the physical strength of the technique. One often hears this in Western dojo(s) but it is not implemented to same degree, nor is “Fudoshin” the true focus of high repetition based training (it is quite likely that most Western students would leave through “boredom” because of a lack physical technique variety in training). The very fact that when these most advanced ranks (karate-ka who have training for 50 years) got together and chose to work single count basic drills rather than advanced forms, or technique, says something very important.

In this article we can only touch on some aspects of Japan vs. West training. An issue to raise is that of attitude and approach in the dojo. When a Westerner walks into a karate Dojo for the first time their mindset is not quite the same as an Asian student who reads the Kanji (Chinese characters) on the door and understands that Do & Jo combine to mean – a place of studying the Way. In the West students come to understand this over time. I feel that the Japanese culture is much better at mimicking a taught action than Westerners, and therefore, there is less tendency in Japan for students to look, question, re-interpret, and then perform their version of what they saw. The above issues tend to combine to make the standard of Kyu ranks in the Japanese dojo(s) better. However, I do not notice such a large difference in ability of black belt ranks when comparing Japan to the West. It seems that once the effect of time has allowed them perfect technique through repetition, and gain an understanding they are studying an art of Do, the same endpoint in ability is reached regardless of cultural differences. Interestingly, I find European students faster learners than my Australian or USA students. One of my University clubs is at a school with a very strong international exchange program, and therefore, has a make-up of approximately 1/3 of each European, Australian and American students. The Europeans appear to learn at a faster rate not so much due to a “mimicry” mindset (like the Japanese) but rather an openness to new ways.

“Zen” in the martial arts is not even mentioned in some karate organizations in the West and in others it is. In Japan I found it is often not mentioned, or talked about, but innately exists (as was eluded to in a couple of examples above). I did have many insightful discussions on “Zen” over post training drinks in Japan – the place where both in business and the martial arts world, the heart of matters are really opened up. More on Zen, Japan and Karate is outlined in our video series.

It is not uncommon for black belts to sometimes travel to Japan and test for a higher Dan rank. However, testing for black belt is a stressful event even if you do it in your home town. Imagine if you elected to do all your training in the West and then travel to Japan for the big day with no real knowledge of the sensei testing you, the students you will fight, or the Japanese culture. That is exactly what a number of my brown belts have done over the years. It was a real testament to their courage to join me in Japan and 2 days later, still with jetlag, perform their Shodan Shinsa (black belt test). All were nervous, however, all rose to the occasion and learning occurred from both the involved Japanese and Western students. In 1997 my first student to perform this task (Dave Cohrs) obviously had the largest factor of the “unknown” as to our knowledge, he was the first Westerner to try it. As is usually the case Dan rank tests are more about Kata and Kihon than fighting. Within Japan, especially in the case of Westerners, these are the things under the most scrutiny.

The experiences briefly outlined in this article are now covered in a documentary series on living, and training in Japan, recently published on the web in the form of downloadable videos.

1. Sotokawa Sensei and Jason Armstrong in 1997. Sotokawa sensei is a 8th Dan in Shito-Ryu and received his 3rd Dan accreditation under Mabuni sensei the founder of Shito-ryu.

2. Sensei Jason standing near Himeji Castle at Sakura time (Cheery Blosson season). Himeji Castle is Japan’s largest castle and is rumored to be the place where Musashi carried out his academic studies for samurai training.

3. Sensei Seto (Shotokan) and Jason Armstrong in 2002 in Tokyo. During Jason’s one year stay in Tokyo Seto sensei’s dojo was one of the clubs he visited.