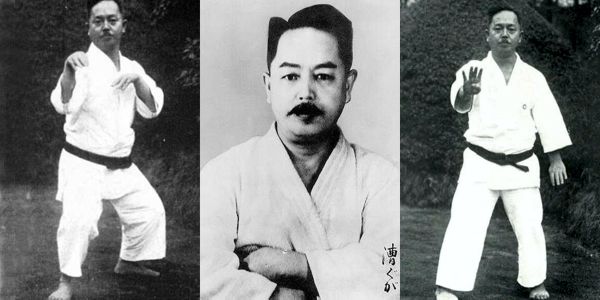 This translation originally appeared in Vol. 29, No. 1 of the Hiroshima University of Economics Journal of Humanities, Social and Natural Sciences.

Translator’s Introduction
Over the course of the relatively short history of karate in the West, one of the most debated and discussed aspects of this martial art has been that of kata training. Practitioners have both solicited and put forth opinions on such things as whether or not practicing kata is an effective way to learn to defend oneself, how prominent a role kata practice should play in one’s karate training, the number of kata that one should “know,” and whether or not the practice of kata is even necessary.

One voice that can speak with some authority with regard to this topic is that of Kenwa Mabuni, the founder of the Shito-ryu school of karate and one of four Okinawans typically given credit for introducing karate to the Japanese mainland (Iwao 187-211). Mabuni learned from such legendary figures as Anko Itosu, Kanryo Higashionna, Go Kenki, Seisho Aragaki and Chomo Hanashiro (McCarthy 1-37), and reportedly knew nearly every kata in existence in Okinawa (McCarthy 11; Iwai 207, 210) (1). Not only that, but venerated karate sensei (and Mabuni contemporary) Hiroshi Kinjo told McCarthy that, whenever someone – including the famed Gichin Funakoshi – wanted to learn, to have corrected, or to better understand the applications of, a kata, it was to Mabuni that the person went (McCarthy 25). Clearly, the Shito-ryu founder was an expert (if not the expert) when it came to kata.

In addition to his expertise with what some might term the “theoretical” side of karate (i.e., forms practice and analysis), Kenwa Mabuni apparently also had some experience with the more “practical” side of the art: McCarthy states that one of Mabuni’s leading students, Ryusho Sakagami, described his teacher as someone who had had his share of street encounters while working as a police officer. McCarthy also goes on to note that Mabuni’s son, Kenei, “said that his father often told him how his karate-do had helped him as a street cop” (McCarthy 24) (2). In a similar vein, Noble reports that Kenei wrote:

In his younger days many people would challenge my father to ‘kake-dameshi’ (challenge match or exchange of techniques)… He accepted these challenges… Each contestant would bring a second. There were no special dojo like there are today; we used to train and fight on open ground. There was no street lighting so after dark we used to fight the challenge matches by the light of lanterns. In this dim light the contestants fought, and then after a period the seconds would intervene and stop the fight… Such challenges were often made to my father… (Noble) (3)

Thus, Mabuni could hardly be considered a “paper tiger” who excelled only at kata: Given the accounts noted above, the Shito-ryu founder would seem to have also known the nature of “real fighting” and self-defense situations. Clearly, his thoughts on the role of kata in karate training are worthy of examination.

The Context of “Practice Kata Correctly”: Karate Kenkyu
Mabuni’s short essay being translated here, “Kata wa tadashiku renshu seyo” (“Practice Kata Correctly”), appeared in the book Karate kenkyu (“Karate Research”), which was first published in 1934, and then later republished in 2003. The book is a collection of essays and other writing by a variety of authors. In addition to “Practice Kata Correctly,” Mabuni also contributed his two-page “Kumite no kenkyu” (4) (“Research on Kumite”) to the publication. Some of the other titles found in Karate kenkyu include: Gichin Funakoshi’s “Seikan wo ronjite do-sei itchi ni yobu” (“Discussing the Concept of Calm Observation: Action and Stillness Together”) (5), Choki Motobu’s “Karate isseki-tan” (“An Evening of Talking About Karate”) (6), Kanken Toyama’s (7) “Chibana-shi no Kusanku” (“Chibana’s Kusanku”) and Hoan Kosugi’s “Karate-den” (“Karate Stories”) (8). Among the other pieces in the book are such varied titles as “The Fist and Virtue,” “The Effects of Karate-jutsu on Blood Pressure and Urine,” “Zen and Kendo,” “Foot and Hip Issues,” “A Girl Karate-ka” and “The Current State of the Karate World.” In total (and excluding the mention of the opening four pages of photos), the table of contents of the 135-page Karate kenkyu lists 36 essays and other items (9).

The editor of Karate kenkyu was a man named Genwa Nakasone. Though perhaps not very familiar to today’s practitioners, Nakasone was involved with various karate-related publications in an editing, writing and/or publishing capacity during his lifetime. The 1938 Karate-do taikan, for which he served as editor, was, according to McKenna, “out of all the early works on Karate-do published during the 1930s, one of the most comprehensive and important…” (McKenna 28). Kobo kempo karate-do nyumon, which Nakasone co-authored with Kenwa Mabuni, has been described (again, by McKenna) as, “… one of the most detailed texts on Karate-do ever written” (McKenna 28). On a somewhat different note, McCarthy states that Nakasone is remembered for organizing the so-called “Meeting of the Masters” in 1936 (McCarthy 30) (10).

It is interesting to note that, although Karate kenkyu has thus far been referred to here as a “book,” it would more accurately be described as the first issue of a journal or a magazine of sorts. In an editor’s postscript at the very end of the publication, Nakasone writes: “I am at last able to present the first issue of Karate kenkyu” (11). He then goes on to explain that, “At first, I wanted it to be a monthly publication, but upon looking into this in various ways, I came to see that it is still too soon for that…. For the time being, I’d like to make it a quarterly…” (Nakasone 135) Unfortunately, it would seem that no subsequent issues of Karate kenkyu were ever released, but the original intention to publish such issues regularly provides a more understandable context for the aims spelled out for the publication on one of its first pages:

The page then ends with the statement that:
Karate-do is the budo which is best at cultivating the new Japanese bushido spirit. (Karate kenkyu 7) (12)

We can only wonder what further valuable and informative pieces of writing would have been left to karate historians and modern karate-ka had the plan to publish Karate kenkyu regularly been brought to fruition.

Translation of Mabuni’s “Practice Karate Correctly”
In karate, the most important thing is kata. Into the kata of karate are woven every manner of attack and defense technique. Therefore, kata must be practiced properly, with a good understanding of their bunkai meaning. There may be those who neglect the practice of kata, thinking that it is sufficient to just practice [pre-arranged] kumite (13) that has been created based on their understanding of the kata, but that will never lead to true advancement. The reason why is that the ways of thrusting and blocking – that is to say, the techniques of attack and defense – have innumerable variations. To create kumite containing all of the techniques in each and every one of their variations is impossible. If one sufficiently and regularly practices kata correctly, it will serve as a foundation for performing – when a crucial time comes – any of the innumerable variations.

However, even if you practice the kata of karate, if that is all that you do, if your [other] training is lacking, then you will not develop sufficient ability. If you do not [also] utilize various training methods to strengthen and quicken the functioning of your hands and feet, as well as to sufficiently study things like body-shifting and engagement distancing, you will be inadequately prepared when the need arises to call on your skills.

If practiced properly, two or three kata will suffice as “your” kata; all of the others can just be studied as sources of additional knowledge. Breadth, no matter how great, means little without depth. In other words, no matter how many kata you know, they will be useless to you if you don’t practice them enough. If you sufficiently study two or three kata as your own and strive to perform them correctly, when the need arises, that training will spontaneously take over and will be shown to be surprisingly effective. If your kata training is incorrect, you will develop bad habits which, no matter how much kumite and makiwara practice you do, will lead to unexpected failure when the time comes to utilize your skills. You should be heedful of this point.

Correctly practicing kata – having sufficiently comprehended their meaning – is the most important thing for a karate trainee. However, the karate-ka must by no means neglect kumite and makiwara practice, either. Accordingly, if one seriously trains – and studies – with the intent of approximately fifty percent kata and fifty percent other things, one will get satisfactory results.

Acknowledgments
The kind cooperation of the publishing company Yoju Shorin is gratefully noted. The translator would also like to express his thanks to his wife, Yasuko Okane, and to his colleague and friend, Izumi Tanaka, for their Japanese language assistance. In addition, he would like to acknowledge the role that Sensei John Hamilton and Senpai Michael Farrell have played in sparking his own fascination with kata. As always, any and all errors are solely the fault of the translator.

About the Translator
Mark Tankosich has dan rankings in both Sho-ha Shorin-ryu karate and Zen Nihon Kendo Renmei jodo. He reads, writes and speaks Japanese, and has lived in Japan for close to 15 years. Currently he and his wife reside in the city of Hiroshima, where he works as a university teacher.

Formlessness And The Dao Of Movement