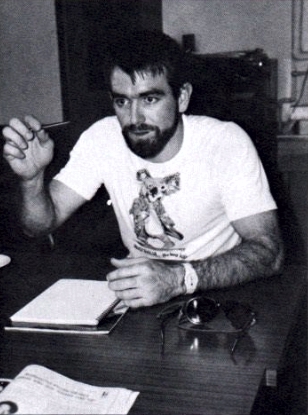 The first of October (1987) is the date for the world release of the newest and most unique book on Kyokushin Karate for years, The Budo Karate of Mas Oyama. The author, Cameron Quinn, is a Nidan from Australia who has not only devoted his life to Sosai Mas Oyama and Kyokushin, but has a university degree in Japanese language and culture and has made an extensive study of comparative philosophy, notably the philosophies of India, China and Japan. Cameron is also an accomplished and experienced tournament fighter, having won the Australian Middleweight Title in 1986 and collected many other places over the years.

Cameron first traveled to Japan to train at the Tokyo Honbu under Sosai Oyama in 1976. Since then he has returned to Japan numerous times, including one period as an uchi-deshi (live-in student) at the Honbu, and once as an interpreter for the Australian government. In this interview with Cameron, the Kyokushin Magazine finds out about this fascinating new book and the reasons why the author was inspired to write it.

Q: Many people might ask why you, as a Nidan, have written a book on karate when it would seem there are many more qualified people to do so. Can you tell our readers what motivated you to do so.

Cameron: It may seem a little presumptuous of me to have done so, but it shouldn’t offend anyone. I have the utmost respect for my sempai in Kyokushin and am in no way suggesting anything different. I enjoy writing. At first, this book was nothing more than a few loose pages of notes which had been requested from some of my students. They were terminology notes mainly. I added a few drawings of the body weapons– seiken, shuto and so on, and that was that. But the questions from the students, as any instructor know, do not stop there. More and more questions needed to be answered and the inevitable result was that I put them all together in a book.

Q: But there must have been one particular episode that made you decide to do a book and not just another handout. 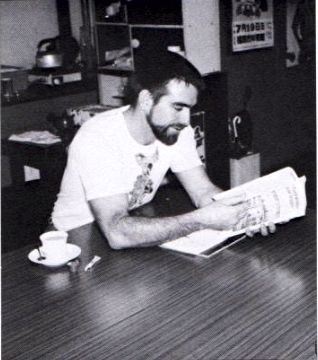 Cameron: Yes. Some of the instructors were talking about kata one day—their names and what they meant and so on, and I realized that here was an area that with my knowledge of Japanese I could research and it would be enjoyable to boot. It would also be of great benefit to the students. The names, the origin of the kata, who first devised them and why. I figured that this sort of information would shed a lot of light on the role kata play in training. Especially today, where there is so much emphasis placed on tournaments and kata are relegated to a minor position in daily training priorities. But research showed that Sosai placed immense importance on kata in his youth, as did all the other great masters — Funakoshi, Miyagi, Mabuni and so on. Sosai for example stated that if one was to practice Tensho enough times, one’s karate would become unbeatable. Now everyone knows that Sosai’s karate was unbeatable — what a lot of people don’t realize is the importance of kata in Sosai’s training. Sosai practiced kata daily, usually 100 kata at a time, and Tensho was to him the most undisciplinable of them all. And in the course of this research, I found out more and more in relation to Sosai, his training and his philosophy. I am sure that the millions of Kyokushin students around the world respect Sosai greatly. But one desire I have is to help the world realize just how rare this man’s greatness is. We take Sosai for granted very easily because he is still here. But in a hundred or 200 years, there will only be tales and whatever records we have of Sosai at that time. In Japan, Sosai is known as the Musashi of the twentieth century, and look how famous Musashi is today, Just think if we had books about him, photographs of his battles, even a video of his bout with Sasaki Kojiro! In two or three hundred years, Sosai is going to be as famous as Musashi is today, and I feel that we are responsible for ensuring that the generations of martial artists to come have as much information on Sosai as possible. It all sounds a bit far fetched but it’s a very real consideration. If I had a video a Musashi fighting the entire Yoshioka school what do you think it would be worth on the black market? Priceless, right. I have been lucky to have spent much time with Sosai personally and the most impressive thing about him to me is not his physical strength but the depth of his philosophy. He is truly a great man and one of the reasons I wrote this book is to let as many people as possible know it.

Q: Does the book talk about anything else besides Sosai and kata?

Cameron: Yes, it talks about many things. For me the most important section of the book is Part One, which talks extensively about the grading system.

Q: In what way does it differ to other books in that section?

Cameron: Without going into too much detail, I have made a comparison between the philosophical foundations of the grading system and certain facets of Indian Yoga. Essentially, the whole grading system is based on the concept of the Five Elements which has its origins in Indian yogic philosophy. Each colored belt has a corresponding mental attitude as well as a principle center of concentration for the body. If the karate student was to understand these principles and apply them in training, their understanding of their art would increase no end. It is especially good for instructors because it helps them to know what each level should be concentrating on and so they can give very specific training to them. It’s a theory which is as old as the hills, but it is also very scientific and specific, which seems to be the trend of modern training.

Q: It sounds very interesting indeed! What else doss the book talk about?

Cameron: Well, it includes chapters on Sosai’s philosophy and the philosophy of Kyokushin—the Spirit of Osu, the Dojo Kun, Sosai’s Eleven Mottoes and so on. There is also an appendix on Dojo Etiquette and another on terminology which, I might add, is very extensive and I think as complete as any Kyokushin instructor or student would need. Shall I go on?

Q: I think we’ve got the picture (laughs all round)! It sounds very different. What about techniques?

Cameron: It is not a technique book. There is enough of those around already. I tend to feel that Sosai’s books are the finest technique instruction books ever written. They’ll do for me anyway, (laughs)

Q: And what does Sosai have to say about your book?

Cameron: Well, it is about Sosai and his karate, so I thought it made sense to make a special trip to Tokyo to discuss it with him. Sosai very gracefully wrote a foreword for the book, recommending it to every Kyokushin student in the world! I guess that means he liked it (smile). In addition, he gave me access to his collection of photographs going back to his teens, many of which are in the book and have never been published previously, at least not in a non Japanese language book.

Q: With Sosai’s recommendation, it is not unreasonable to see the book becoming a necessary part of every karate student’s collection.

Cameron: All I can say is that I am certain it will be well received by Kyokushin students everywhere. It is unique among karate books and the information it contains is valuable to anyone interested in improving their understanding of Kyokushin and the philosophy of Budo in general.

Q: Thank you for your time and we wish you every sucess!

Cameron: Thank for the opportunity to talk with you.

Memoirs of an American Samurai