“How did you get into self defense? Did something happen to you?” It’s a question I’ve been asked countless times.

I wasn’t always in touch with my Beast Girl within. Growing up in the 1960s— first June Cleaver then peace niks and sit-ins —who knew about fighting back? “Being prepared” meant leaving home with clean underwear and enough change for a phone call. But that all changed on my maiden voyage into the world—a grunge-style sojourn that began in the Middle East and took me traipsing across central and south Asia where I would birth my fighting heart and undying reverence for female disobedience.

Like many on their maiden voyage, I too was assaulted. Beyond unwanted touching and some attempts at sexual assault, my travels boast colorful tales: There was the crazed Afghani who assailed me with a knife and horse-whipping stick when my companion and I refused his offer to trade me for his prized camel. Elsewhere, a government official attacked me from behind and a vicious fight ensued. (I had spun around and spit in his face—not a tactic I can heartily recommend.)

Nevertheless, I claimed moments of righteous victory. One night when a pervert wouldn’t take no for an answer, I went off. I struck him about the head and neck, then I busted his hand. As I watched him deflate, I had a dawning recognition: My body was a tool and instrument of power and with this tool I too could be dangerous. Power radiated from my body like jungle heat; a homerun grin peered through my fury.

These violations, coupled with residual rage, propelled me to the martial arts. Ten years later in Boulder, Colorado, a home-alone encounter with a knife-wielding would-be rapist led me to down and dirty methods that now comprise the lion’s share of what and how I teach. 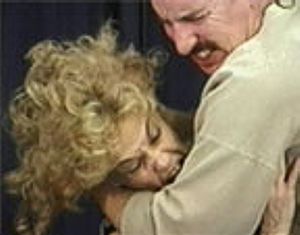 Although I’d had no technique, my prior incidents taught me important lessons: that opening moves count; that intention fueled by fighting spirit is the mother of technique; that it’s always best to nip a problem in the bud. I also learned that assaults against women happen in close quarters. Predators often use engulfing, pinning, choking, slapping or immobilizing tactics to subdue their intended prey. Escaping these clutches calls for explosive fighting methods. As terrifying as it sounds, it’s important to remember: If he can reach you, you can reach him.

To better understand your options let’s examine, and I will critique, my very first close encounter: an upright rape attempt perpetrated by my kibbutz “father.” We’ll bypass the tea, cookies and amiable chit chat and cut right to the scene where, after pawing me, I promptly tried to leave.

Before I reached the door, he spun me around and slammed me against the wall, thumping my head. Pressing me into the wall, he grabbed my throat and started swearing at me in French. (Tip: Right then and there while he was running his he-man rap and establishing dominance, I could have counterattacked. A sneaky no-holds-barred ear clap might have done the trick.)

Physically, he was a thick, burly guy. As I am a whopping five feet tall on a good hair day, he looked and felt like The Hulk. At first, I struggled and tried to push him away. (Tip: In tight quarters, pushing on he-man’s chest is ineffectual and pummeling it doesn’t hurt. Why do you think Tarzan pounds his chest and not his gonads or Adam’s apple?)

The more I pushed and pleaded, the more forceful he became. When my screams grew louder, he slapped one hand over my mouth then started groping me, fumbling with my blouse. (Tip: Great news! Once his hands are occupied, it’s an opportune time to counterattack; better yet, trap or hold his offending hands in place then counter with your free limbs.)

In that moment I was paralyzed. In my mind, being pinned by a larger pumped-up creature could only mean one thing: surrender. I stopped struggling. My body went limp—not because it was an effective strategy that might enable me to spring into action, but because I felt utterly helpless. (Tip: Going from “rag doll to ballistic,” from zero to 100 percent can aid you in taking an aggressor by surprise.)

Then something clicked. I felt a blaze of heat, as if a seed inside of me popped open releasing a powder keg of fury and I just went primal. I struck and clawed at his face, I kicked, punched, bit, hollered, twisted and torqued myself free. Then I flew out the door.

Make Opening Moves Count!
In self defense, there are no recipes or formulas. Any number of techniques could work—or not. You must remain adaptable, continually hunting for openings and targets. As my own stories illustrate, marshalling an aggressive mindset is crucial. Don’t just defend—attack back, wielding body parts like power tools! Unless you can immediately escape, opening moves must be followed by additional no-nonsense techniques. With that in mind, here are a couple of options for your close-quarters toolbox:

If your arms are unconstrained at your side, you could deliver a walloping ear clap using the aforementioned “rag doll to ballistic” method. With one or both hands (either open or slightly cupped), swing your arms around and bash the assailant’s ears. If executed forcefully, this will sound like a bomb going off in his head. It’s stunning and it upsets balance and equilibrium. (I’m told it can even burst an eardrum.) Follow up as needed with rapid-fire knee strikes to the groin, lower abdomen or ribs, or deliver bone-bashing kicks to his lower leg. Yell like you’re waking the dead. If you can get your hands on an object, wield it like a weapon. Never hang around to admire your handiwork—escape ASAP!

Attack center-line targets such as the eyes, throat or groin. Throat strikes can be accomplished with an open “Y hand,” the folded down knuckles of your fingers, or with a fist. Be deceptive! A hand placed on an assailant’s chest as if pleading with him to stop, can suddenly, explosively drive upward toward his Adam’s apple. You can also drive two stiff fingers into the notch just below the throat. (Tip: Shift aside in case he gags—or worse.)

You can also head south and snatch the family jewels. Depending on the level of violence and urgency, you might momentarily stroke he-man’s thigh as if assuaging the beast, then turn that hand into an evil paddle—wham, bam, whack! Or “seize and squeeze,” followed by a medley of rude blows. (Surely not the blows he had in mind.)
Sorry, fella, that’s the occupational hazard of being a rapist.

Are You Prepared for a Violent Street Attack?

Loren W Christensen - August 29, 2013
We use cookies to ensure that we give you the best experience on our website. If you continue to use this site we will assume that you are happy with it.OkRead more