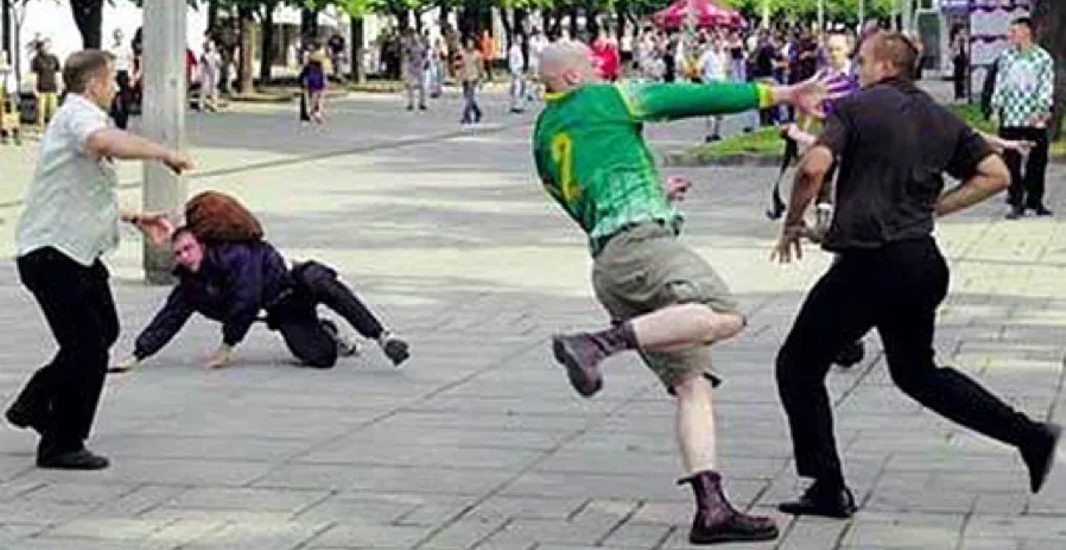 One of the most distinguishing features of Reality Based Training is the way it deals with conflict resolution. This is broken down into three separate phases. That is, the pre-conflict phase, the conflict phase and the post-conflict phase.

The Pre-Conflict Phase in Reality-Based Defense
The pre-conflict phase can be the most important part of an event. It’s where 90% of the engagement can be avoided altogether; that is, with proper awareness, avoidance, correct demeanor and appropriate verbal skills. This subject matter is not even approached in most traditional schools.

The Conflict Phase in Reality-Based Defense
The next phase is the conflict-phase, which is the actual fight. The reality-based approach emphasizes the preemptive strike, gross motor movements and attacking with the highest force-level appropriate. Reality-based training focuses on what actually happens on the street; surprise attacks, ambushes, weapons and multiple attackers.

The Conflict Phase often Includes Weapons
For some unfathomable reason most martial arts and sport fight practitioners do not carry a weapon. Furthermore they falsely assume that they can defend themselves from a weapons attack unarmed? People who can do that are few and far between. It must be the influence of kung fu movies, because that’s a construct built on a delusion.

Reality-based training acknowledges the fact that the world has become a far more dangerous place. Most assaults are initiated with weapons, either knives, guns or impact weapons. Not only is counter-weapon training taught, but the proper use of these weapons is also covered.

The Post-Conflict Phase in Reality-Based Defense
The last stage of conflict resolution is the post-conflict phase and this is where topics such as first-aid, self-triage going to a medical clinic. To wait or not to wait for the police, what to say to the police when they arrive, how to handle your legal defense in court etc.

Homeowner Kills Intruder: ‘I was fighting for my life’

How Could the Holy Secrets of Handgunning Be Known By a...