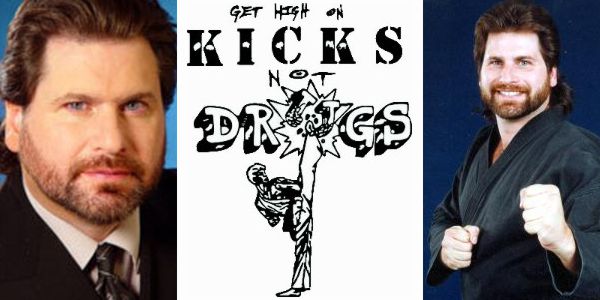 Get High On Kicks Not Drugs is a unique program created by taekwon-do black belt Allen Sarac in partnership with the Nevada Youth Alliance (NYA), from Henderson Nevada. Since this program took root in 2001 more than 425 At Risk kids have turned their life around thanks to this unique curriculum.

“I got the idea for the program 12 years ago and was fortunate enough to connect with the NYA and its founder David Osman,” said Sarac. “Then I had a school in North Las Vegas and I’d see kids watching class from outside because they couldn’t afford lessons. With the assistance of the NYA I put together a kick-a-thon that raised enough money to create programs for kids who couldn’t afford lessons.It was such a total success, so with David’s help we decided to take the program nationwide.”

Allen’s plan evolved into a program that would greatly benefit youngsters that were walking a fine line with the law and were in need of a positive influence in their lives. After interviewing with a potpourri of state agencies dealing with At Risk Kids and their subsequent programs, he merged existing state requirements with a curriculum of his own design, calling it Get High On Kicks Not Drugs.

“This is a 12 week state approved and state funded After School Program,” explained Sarac. “I go to the schools enrolled in the program and teach karate twice a week. These students do not come to the dojo, they are taught on school grounds, as this is an after school program. Of course the kids are anxious to learn martial arts, but in order to take the class they must also attend a number of non-martial art related workshops. These workshops are the real meat of the program. What they learn here can make all the difference in how they turn their lives around. The classes include anger management taught by the police department, an anti-drug and tobacco class, an anti-gang and violence class taught by the members of the state justice system, and we also offer an anti-abduction class, called “The Good Knight.”

The Good Knight program employed by Sarac is being done throughout the United States by Homeland Security. Designed for kids ages 4-9 it’s a video starring an English mouse who teaches kids the ABC’s of protecting themselves, and at the end of the program the kids take a knights oath to protect themselves and other kids by spreading the word about the proper way to behave in certain situations. At the end of the session, a man dressed as a knight, in full armor, “knights” the kids by dubbing them with a sword. He then presents them with a certificate proclaiming them a knight.

Other programs include a racial harmony group, an environmental protection class that includes some up-close and personal time with a variety of critters that are on nature’s short list.

These behavioral education classes give At Risk kids an opportunity to get out of their particular environment, but the incentive for them to even give these programs a shot at working is the fact that they must attend the classes in order to get free martial art lessons.

“If the kids go to four of the classes I mentioned, the karate lessons are free,” said Sarac. “The state picks up the tab for the program, as the federal government allocates x number of dollars per state for After School Programs to assist At Risk students. When given the choice between attending a lecture series or spending time in a juvenile detention center or taking martial arts, they’re going to chose karate every time.”

Sarac says it doesn’t matter what style of martial arts the kids learn, it could be his style of taekwondo, or Kempo, or shotokan, the system is secondary to the fact that it gets the kids interested in the program, and to participate in the program they must attend the above mentioned classes, all designed to give the kids another view of the world and to learn that gang violence, skipping school, and bad behavior in general isn’t the answer to their problems. Sarac gave one example of how his program can turn a life around.

“We had this gang banger who was introduced to chess by his parole officer and he took to the challenge of the game,” said Sarac. “One night his gang-banger buddies were going to do their thing and this kid couldn’t go with them because, according to our program he was obligated to attend chess class that evening. Well, that night there was a shooting, one of his pals was killed and the rest went to prison and he was off doing a chess game. Today this one-time gang banger is the head of the Southern Nevada Gang Task Force.”

“The Get High On Kicks program works beyond a shadow of a doubt,” said Simon. “The outcome from Allan’s program is just off the scale. Believe it or not, thus far, more than 90% of the kids from the Kicks program have not come back into the Juvenile Justice System. It’s absolutely phenomenal. Every kid we put into Allan’s program went back to school and graduated. And the financial benefit to the state is amazing. Every time a kid comes into our system it costs us 40 thousand dollars for detention, jail and court appearances. So, with every kid Allan that successfully completes the kick program the state saves at least 40 thousand dollars. “

“I am just trying to make a difference one kid at a time,” says Sarac. “We’ve proven how effective the Get High On Kicks Not Drugs program can be in Nevada, and I’m hoping that will have a domino affect throughout the nation.

The Get High On Kicks program works in every state, and when a certified martial arts school wants to join the program, Sarac goes to that city and meets with city and school officials to set up the program and if the school wants to do a kick-a-thon to raise additional funding Sarac will assist in setting up the event.

For information about Sarac’s Get High On Kicks Not Drugs program call 702-566-4662 or E-mail asarc6010(at)aol(dot)com or visit his website.