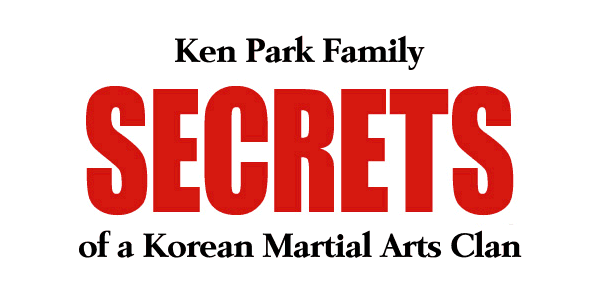 There was a time when the only way a person could learn a martial art was to be taught that skill in secret, usually by a relative. Today, anyone with the price of admission can study almost any discipline of martial art they desire to learn. However every once in a great while a person will emerge whose training comes from the very roots of the old school, when grandfather, taught son, who in return taught his sons and son on. Ken Park is such a man and comes from such a family.

“According to our family scrolls we started off as doorai or tribal guards in our homeland of Korea,” Ken explained. The doorai was part of a private army under the control of a local warlord. My ancestors were akin to what local police are today. Our family style is Ryongkido, which when translated, means way of dragon energy. The style is a branch of Sadomusool, which are tribal family martial arts. This particular system was originated around the early 900’s, during the three kingdoms period. It started off as a ten-maneuver system and a philosophy. The philosophy being efficiency is key. Anything that hinders Ryongkido’s progression toward efficiency must be discarded and it’s that principal that has ensured the survival of the Park family for generations.”

During the Japanese occupation of Korea any Korean could be executed for studying a martial art. However even under the threat of death Ken’s grandfather continued to teach the secrets of the doorai to his clan, but no one was even allowed to speak of their training.

“No one outside of the family was permitted to learn the system,” Ken explained. “The only exceptions would be if they were adopted by the family or considered to be exceptionally loyal to the family. In fact if anyone were to even ask a family member if they knew a martial art or knew of such a system they had to say no, they’ve never heard of such a thing.”

Ken’s introduction to the family business began when he was a youngster living in Korea. At 5 a.m. everyday Ken began his training began his training regiment. His father and grandfather would take him though various drills along with his three brothers, and then Ken would go to school. That evening after completing his homework Ken’s training would begin again.

“When I was 4 years old I didn’t learn a lot of maneuvers,” Ken recalled. “What my father and grandfather did was to pound principles and philosophies into my head during that time.

Eventually I was taught how to use my body as a weapon. The first thing I learned was the six elbow angles. Then we do the nine punching angles. We also practice knee strikes, which my dad incorporated from Muay Thai. He also took some of their shin sweeps; it’s basically a low roundhouse. Once my dad landed one of those on my leg and even though I was wearing pads I hobbled around for more than a week.”

Ken’s father also taught his sons the same ancient techniques as were shown to him by his father as were passed down via family scrolls. Known as Splashing Hands, these secret Chinese techniques was one of the links that bonded past, present, and future members of the Park clan with their ancestors. Ken was learning the same skills that the doorai used to protect their village in the year 900 AD.

“My father studied a Kung-fu style called Splashing Hands,” said Ken. “I was told that the Shaolin Temple guards were the only ones who were taught Splashing Hands in the old days.”

“Most of the strikes using Splashing Hands are techniques used against sensitive or soft areas of the body. Everything was designed to take an attacker out very quickly and very efficiently.

The temple guards didn’t have time for wasted movements as they were often attacked by more than one opponent. They had to be sure that once they struck a person they could move on to the next attacker without fear of the first one entering the fight again.”

Like many styles and systems that have evolved over time, Ken’s family has also taken bits and pieces from the other arts and blended them into their style.

“Ryongkido has always feed off of other systems,” Ken explained. “We’ll look at another style and although it may be different from what we do, if it’s effective we would add it to our system. Over the centuries the 10-maneuver system has been changed. Everything has been modified for the sake of efficiency.”

“Our style is a blend of other systems including San Su, Aki Jujitsu from Japan, a lot of the Budo, or weapons. Our hands are more Chinese, we use more palm strikes than punches but we also employ a lot of elbow techniques too.”

“I especially like takedowns,” Ken said. “When ever we made the transition from striking to grappling our father was always telling us to go to the ground on our own terms. We were taught that it was okay to make the other person think you were not in control, but that ploy is merely used to set him up for another technique. I also like using the ground as a weapon too. When you throw someone with force, if they don’t know how to fall properly, the ground will hit your opponent harder than you ever could.”

“From Aikido we took some circular movements, the principal of redirection of force using passive tactics. From karate we took the explosive power of the hands and how to channel that energy into one decisive strike.”

“Although I have a deep respect for Tae Kwon Do I feel that lack superior hand techniques,” Ken said. “When it comes to foot and hand techniques it’s about 80-20. In my family’s style we use a lot of hand techniques and although we do a lot of kicking we do not employ any high kicks. My grandfather took out the flying maneuvers of Tae Kwon Do. He said there was absolutely no reason for your feet to leave the ground. Ryongkido is also a very aggressive style. We do not wait for an attack to come to us we are not a defensive style at all. In fact we only learn a few pure defensive techniques. In our style of fighting aggressiveness is rewarded.”

Ken’s goal in a fight is the same as the doorai of earlier generations, which is simply to get it over with as quickly and efficiently as possible.

“My goal is not to stand back and deflect an attack,” said Ken. “It is to neutralize a threat which is the difference between self defense and self protection.

The best way I know how to neutralize a threat is to move towards it and deal with it at the base or at the roots. For example I’ve learned that if someone kicks me to stand long range is silly because that’s where the power core is. If I can get inside, which is known as the first gate of attack, which is the length of their reach, I can go inside that foot and even if it lands it isn’t going to hurt. We do not use many defensive techniques because once you learn pure defensive techniques you’re in a mindset of being defensive. Thus you become more comfortable in the secondary or passive position than you do in the primary position which is an action position.“

In addition to training with his family, Ken has also trained with his father’s friends and teachers. One such schooling came in the Japanese art of Yoseikan Aikido. The only reason, Ken, a Korean, was permitted to train in another secret art that belonged to a Japanese clan was because of Ken’s father’s deep friendship with Isogi Noburo, who was an instructor of Yoseikan Aikido.

Yoseikdan Aikido is a style that came from a friend of my fathers,” Ken explained. “Because I was the only non Japanese student there I was always the fall guy. To give you an example, when we would train outside if there was a mud puddle I’d have to lay down in it and let the other students walk over me so they would not get their feet dirty. I was told that this was done to teach me humility. The Japanese teacher would often say ‘You Koreans seem to have a problem with humility.’ Although I don’t think that was entirely their motive, I did come out of the experience with an understanding that no matter how good I thought I was there was always someone who could be better.”

Ken’s father retired from the military moved his family to the Unites States in 1977. Unfortunately Ken’s father was killed in a car accident in 1998 thus leaving the faith of their families art in the hands of his father and his sons.

Today Ryongkido’s secret techniques are still being taught in private and only to family members, Ken says that the veil of mystery may be lifted in order to preserve his family’s martial arts heritage.

“There are three family members left besides myself to teach the system,” Ken said. “My grandfather, my two older brothers and me. Dad’s death hit us all pretty hard. So much so that we only just started teaching again last year. My older brother has a son and a daughter and he’s teaching them now. My other brother doesn’t have any kids and doesn’t want any so the legacy of Ryongkido will die with us and instead of doing that we have decided to pass on our family’s art to a few selected individuals out side of the family. We feel that we have an obligation to pass on the information that may protect or help somebody else.”