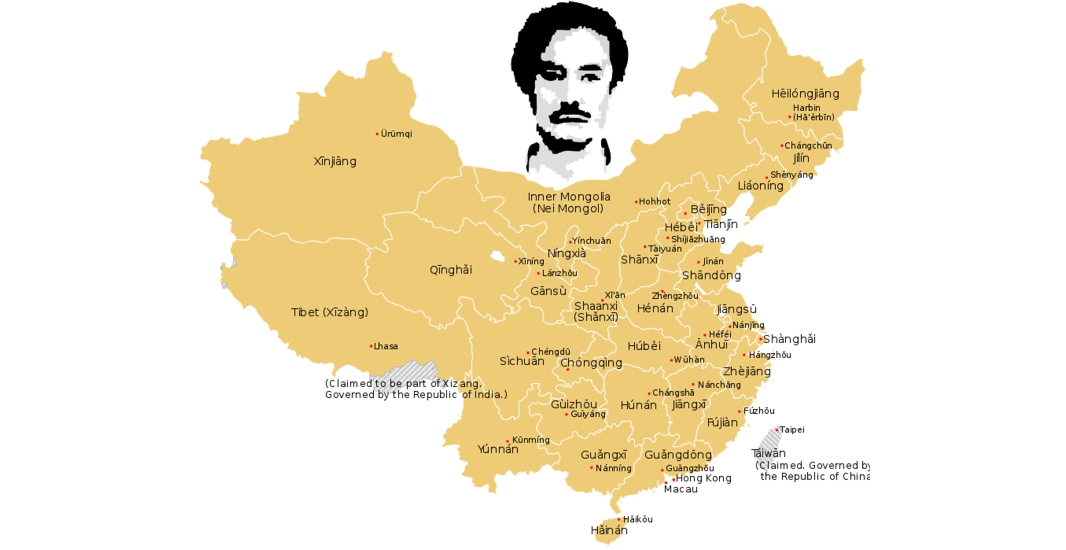 Kiun Li was born on April 23, 1931 in the Gansu-e province of China a few miles outside of the town of Wuwie. The son of a farmer, Kiun Li spent his early years with his family. Many missionaries made their way through the Gansu-e province and Master Li’s parents paid them all equal respect and tithes. Master Li frequently referred to his father “hedging his bets” between the religions, “just in case one is REALLY the true faith.

Perhaps the true measure of how deeply the Lis believed that one of the theological practices had to be true manifested itself in the way they sent their three sons to join the different religions. At age ten Kiun’s oldest brother was sent to join the Shaolin Monastery and at age eleven his middle brother was sent with the Jesuits to train to become a Catholic Priest. At age twelve young Kiun was sent with Mr. and Mrs. Comstock, Episcopalian Missionaries from Britain who had shared many meals at the Li home. The Comstocks were quite helpful, friendly people and Kiun admired their world travels and was eager to explore the world beyond the surrounding hills and mountain ranges. When the time came for the Comstocks to move on, Kiun Li traveled with them.

For the next thirteen years, Kiun Li traveled with the missionaries doing “the Lord’s work.” They traveled throughout the provinces of China, North and South Korea, Thailand, North and South Vietnam, Laos, Cambodia, Burma, Okinawa, the Philippines and Japan. Sometimes they would stay in an area for six or seven months. Other times their stay would be as short as a month (depending upon the reception they received from local inhabitants). There were many places where they were quite unwelcome and many more where the local governments resented the activities of such “interlopers”.

As they traveled the continent and Kiun made many friends and yes, a few enemies, Kiun Li grew to be a man. At age twenty-five he and the Comstocks had spent the last two years in Japan helping the country overcome the atrocities of the Second World War. It is important to note that Master Li referred to the atrocities the citizenry of Japan was exposed to was the fault of their own Emperor Hirohito and other military leaders. “If one chooses to scratch the enemy,” Master Li said, “Then one must make sure they are not attacking a tiger whose own claws are longer and sharper than their own.” In short he was saying, “Pick on someone your own size.” Or “Don’t pick a fight you can’t win.”

In Central China there were a group of mercenaries who worshiped a war god who manifested himself in the form of a tiger. This god’s name was Kola.* This was a time of great unrest in the region and work was plentiful for the clan. While in the area for eleven months, the Comstocks helped the mercenaries by giving them medical treatment for both illness and injuries. The Comstocks strove to aid them without condoning their actions but local authorities wanted to charge them with “conspiracy and complicity with unsavory elements (loose translation)”. The Comstocks and eighteen-year-old Kiun fled the area just hours before the constabulary arrived to arrest them.

*An interesting note regarding the linguistics of Asia. Many scholars believe that tora, the Japanese word for tiger, comes from the war god Kola. The Japanese language contains no “L” sounds and is frequently turned into an “R” pronunciation. Those same scholars say that, in all likelihood, the Japanese were exposed to images, drawings and sculptures of Kola and (unable to make the L sound) pronounced the word Kora and later the K became a T as the word was used in a more wide spread manner, thus Kola became Tora. One might ask why the Japanese language contained no word for tiger. Tigers are NOT indigenous to Japan, Okinawa or any of the islands of Asia. Only when they traveled to the mainland of Asia were the Japanese exposed to the large feline hunters.

In 1956 the Comstocks were called back to England from their missionary work. When told that their work in Asia was complete twenty-five year old Kiun Li was excited about traveling to England and then exploring Europe. The Comstocks had spent many hours over the years sharing European and World history with Kiun . It was then that the Comstocks told Kiun Li it was time for him to return home and do the Lord’s work there. Kiun did not understand. He thought they owned him and as such had to take him with them. Thirteen years earlier when Kiun left home with the missionaries his mother told him that he belonged to them now and must honor their agreement by doing whatever they asked. Kiun had spent Thirteen years of his life thinking he was a slave. The Comstocks were shocked by this revelation. They thought Kiun Li was just a dedicated mission worker who stayed with them because of mutual love for the Lord. They gave Kiun fifty dollars (a sizeable amount in Japan in 1956) and said farewell as they boarded the boat to England.

Kiun Li traveled all of Japan for four years training in several different disciplines with numerous instructors. Then, signing up for duty on a merchant ship, he traveled the world staying in places for as long as four or five years, sharing his martial arts experience and knowledge with those who wanted to learn. He never stayed put for very long though. It seems the Comstocks had firmly planted the nomad ideals in Kiun Li and he continued to travel never putting down roots, never starting a family and never returning home to the farming hamlet of Wuwie.

In 1972 the now forty-one-year old world traveler came to the United States. He had seen many American western films and was deeply enamored with John Wayne and his sense of fair play and strength of character. So, obviously his first destination in the United States was Texas. There he worked in the oil fields and taught martial arts to the roughnecks working the rigs. A man of small stature (5’3″ and 115 pounds) Li had to physically prove the self-defense techniques he’d spent a lifetime perfecting. Many times, an oilrig worker with too many drinks in him would challenge Kiun and face the pain that quickly followed such a folly.

Later Kiun Li traveled across the country and found the place he said reminded him most of his beloved home in China. Li instantly fell in love with Tennessee. The slower pace of life, the gentle spirit of the people and the climate all combined to give Kiun Li the one thing he had spent most of his life seeking, a home. Settling in Madison, Tennessee, a suburb of Nashville, Li once again began sharing his martial arts knowledge with selected students. It was at this time that Kiun Li met the youngest student he would ever train, a twenty-four year old man with extensive martial arts experience in several different disciplines. Li firmly held to the ideals that there were many things to be learned from each of the martial arts and that a true martial art would teach the strengths of the many disciplines he had practiced and eliminate the weaknesses. For all the arts have strengths and all have weakness.

Shortly after arriving in Tennessee, Li fell ill for the first time in his life. Doctors at Vanderbilt hospital in Nashville ran several tests and it was concluded that the fifty-one year old martial arts master, world traveler, entrepreneur, roughneck, deck hand, farmer, fisherman, scribe, poet and missionary had leukemia. They told Li he would have to undergo chemotherapy and that the odds of survival were not good even with the treatments. Kiun Li and the doctor wandered the halls of the cancer treatment wards discussing what would happen to him as a result of the treatments. Li saw the many patients who were losing their hair, shriveling as the disease took effect and were wasting away. Li told the doctor he had no desire to go through that. If the only way to survive was to destroy his humanity he would take his chances without it.

Master Kiun Li, knowing his time was growing short, began to work with a single student. That student was twenty-four year old Lem Absher. Absher and Li made an immediate “connection”. Absher had already earned a second-degree Black Belt in Shito-ryu from Sensei D.L. Byer, a first degree in Wado-ryu from Sensei Steve Jackson and Black Belts in Tae Kwon Do, Tang Soo Do and Mu Duk Kwon from Master Jimmy Gray. He had also trained in Wing Chun Gung-fu with Master Pho. Li immediately began sharing techniques, forms and philosophies with the young martial artist. The last two and a half years of Master Li’s life was spent sharing his vast knowledge and experience with Absher. The two spent close to thirty hours a week together. Some of the time was spent in heavy exercise and drills while others were spent kneeling and discussing the philosophies of what a martial artist could and should be. Master Kiun Li, who had been no angel in his post missionary days, always had a large glass of water near him. He continually gulped large swallows from the glass during the evenings they spent together. It wasn’t until the second year of these sessions that Absher discovered the glass contained vodka. Li was in such agony from the disease wracking his body that the liquor was the only way he could ease the pain. He never appeared or acted intoxicated and he never lost his cool demeanor. It was when Absher made this discovery that Li told him of his illness. Absher was devastated. Kiun Li had become a second father to him.

The last months of Kiun Li’s life were not spent in the gray gloom, which usually permeates the lives of those facing impending death. Master Li’s last days were spent in joy and reflection on a life lived to the fullest. Kiun Li lived a life of adventure and happiness, a life of seeking and finding, a life of curiosity and discover, a life of questions and answers, a good life.

In the course of his lifetime, Kiun Li, met and influenced hundreds of martial artists around the world. He encountered Brazilian Jujitsu in the 1970’s (twenty years before it would hit main stream America via the Ultimate Fighting Championships). Master Li left many questions answered and still more unasked. His most important gift to Lem Absher was not a Black Belt in Li’s art of Kola-do (the way of the tiger) but it was in a simple quote, with more meaning than even Kiun Li probably realized:

“Martial arts, disciplines and styles must change.
Change for the sake of change is non-productive.
Change because it is necessary is growth.
A martial artist or art which refuses to grow shall surely die.”
Master Kiun Li (1931-1987)