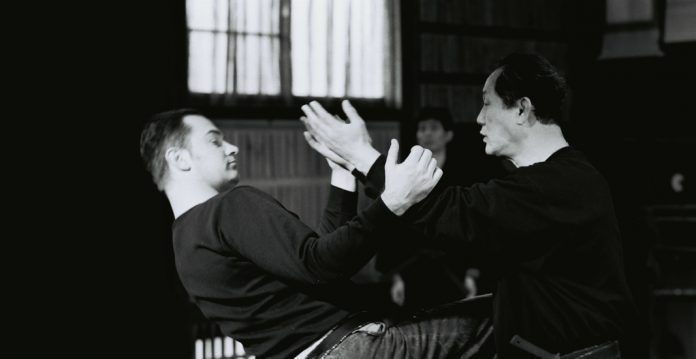 “He is like the shadow of Soke Hatsumi and many see him as the one who will eventually take the helm of Bujinkan” The Bio of Toshiro Nagato Shihan as published in Ninja Magazine in 1987.

Toshiro Nagato is a newcomer to ninjutsu, relatively speaking, but he is already ranked as a ninth dan in Togakure ryu. Every time master Masaaki Hatsumi leaves Japan to teach a seminar, he is at his side, like a bodyguard. He looks the part. A giant, well muscled, the type of person you would hire as a bouncer if you owned a night club.

His muscle makes you fear him, but when he’s moving, it seems that Toshiro Nagato does not use his strength at all. He moves so gently and smoothly that it becomes unclear whether he is fighting or dancing.

Shihan Toshiro Nagato does not share the enthusiasm that others have about his rank. To them he occupies a lofty perch, but he still considers himself a beginner, still learning all the time. To him. ten years of ninjutsu is nothing to write home about.

Toshiro Nagato, the 40-year-old ninjutsu master teacher, started his life as a martial artist when he was eight years old. Like most Japanese school children he took part in the compulsory judo lessons that are as much a part of the educational system their as gym is to American children. The young Nagato enjoyed his judo training and his unusual size and strength helped him win third place in the Kodokan tournament for junior high school students.

As far as Toshiro Nagato was concerned, this was to be the end of his career as a judoka, but the Kodokan masters thought differently. They decided to send Toshiro to the U.S. to teach judo at the University of Ontario in Oregon. While teaching there he was also studying, all the while dreaming of something else. He had heard the name of the Judo master, Hatsumi Masaaki and, while in the states, had read Andrew Adams’ book Ninja, The Invisible Assassins. Toshiro Nagato wanted to be a true martial artist, not just a judoka, and ninjutsu seemed the way to go. He decided then and there that when he returned to Japan, he would seek out this art.

Things didn’t quite work out the way Toshiro Nagato had planned, as circumstances led him into the professional kickboxing ring. He entered competitions in Tokyo to earn badly needed money.

Where size had always been his ally, it now became his adversary. A giant at 90 kg (about 195 pounds), he was far heavier than any established division in Japan. He then undertook a strict diet that would eventually drop him to 72.5 kg (about 160 pounds) still the heaviest division for competition. In three major events in Korakuen Halls, he won all his fights, all by knock-out. These victories made him champion of the Shin Jin – the newcomers.

Despite his victories, kickboxing was no fun for Toshiro Nagato. “Too much beating up, too bad for the health, bad for my face and also, it was not a martial art.”

Before he began to explore ninjutsu, Toshiro Nagato felt that he had to get out of Japan. Having been in Oregon, he knew that there were places in the world that offered less stress than Japan. Kickboxing had been a way for Nagato to release some of that stress, but now that he was through with that sport, he felt he needed a change of atmosphere.

A friend in America, Michael Echanis, a former Green Beret, invited him to America and he accepted. Echanis, a professional soldier and Vietnam veteran, wanted to learn the martial arts from Nagato. Echanis said there was a job waiting for him at the Special Forces camp in North Carolina.

“They wanted me to be a Green Beret and when there was a mission for everybody in South America, they asked me to join them. I felt wrong about it and I told them that I wasn’t interested. Something in me said, ‘Danger.’ Unfortunately, Nagato’s feelings about the mission were well-founded. While in South America, the plane crashed and all aboard were lost. “There was a feeling inside me that told me not to go,” said Nagato. “It convinced me that it was time to go back and find the true martial arts teacher.”

Toshiro Nagato found Masaaki Hatsumi in Noda City. Ninjutsu was completely different from anything he had yet experienced in the martial arts. “It wasn’t a sport, but I was glad because I didn’t want to fight any more. I didn’t go there to fight. Lately, though, I feel that I miss the fighting a little bit, but it’s nothing. ”

Masaaki Hatsumi immediately saw talent in Toshiro Nagato. He saw the man’s fighting spirit. There is no surprise in this, however, as street-fighting was common in the neighborhood that Nagato grew up in. Nagato background in judo and kickboxing was a big asset as well. Toshiro Nagato rose through the ranks quickly. He put everything into his training and, before he knew it, he was a master teacher.

Toshiro Nagato teaches a handful of students in a small, family-like dojo (and today also holds classes at the Hombu dojo in Noda – IG). Most of his people are Japanese, but he does have a few foreigners under his tutorage. Robert Bussey of Nebraska was his student for a while and was graded a fourth dan by the time he returned to the States. “I don’t discriminate against non-Japanese,” says Toshiro Nagato. “I teach them the same as I teach the Japanese. In all, six of my students have passed the goden (fifth dan) test from Hatsumi Sensei.”

Toshiro Nagato earns his living as a hone-tzugi (bone setter), just like Hatsumi, and lives happily in Saitiama ken with his wife Mamiko and two sons Yoshiki and Yuhe.

Toshiro Nagato doesn’t feel very special being graded as a ninth dan. “I have to feel the responsibility, but there’s nothing. Maybe some responsibility, but I still have so much to learn. I must stick to Hatsumi Sensei and hold onto him to learn all that I can learn. Okay, so I have a little feeling of what it means to be a martial artist, not much more.”

Toshiro Nagato does not foresee a big change in ninjutsu in the future. “We don’t consider ninjutsu to be the ultimate art,” says Nagato. “Budo, the martial arts world, is the essence of everything. It’s all still alive and we want to keep it alive. We look for understanding, for peaceful life and happiness. Budo is good for the country, and for the whole universe.