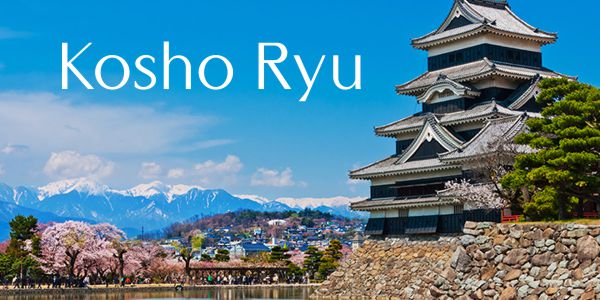 Kosho Ryu is an ancient art form founded in about 1245 AD by a monk named Bosatsu. Legend has it that Bosatsu meditated under an old pine tree and discovered the meaning of true self-defense. Self-Defense with no body contact is the highest physical art. Kosho Ryu artists learn to move such that opponents cannot see, feel or hear them. By manipulating the attacker perception of their environment, they are able to control their movements, force and aggression. Today the temple still stands strong in Japan as it did centuries ago. However, there is no practice of Kosho Ryu at the temple at present, as the monks spend most of their time with their religious practices. The most apparent reminder of the past is an old plaque found on the temple grounds dedicated to Bosatsu.

The direct translation of Kosho Ryu is “the study of natural laws”, “the way of enlightenment” through motion and movement. There is no other art like Kosho Ryu. It is not a “style” or “system” but rather an understanding or process. It is a study of the natural law of motion and movement. The student learns that all the seemingly diversified art forms function by the same set of natural laws and principles. In doing so, the student learns to accept and deal with life as it is and not how they wish it to be. Kosho is about the process of study. Its combative arts are devastatingly effective but only represent a part of what Kosho Ryu is all about. The art form builds healthy character and allows the student to expand their abilities beyond expectations.

Kosho Ryu students learn to pay attention to their environment and to themselves. As a result of this natural law approach, the principles of Kosho can easily be integrated with any art. These principles will lend new insights and a quantum leap in understanding to even the advanced practitioners of martial arts.

Kosho Ryu is more than just a fighting art, it is a way of life complete with a socially significant philosophy that is capitalized in the term “self-defense”. Only in the most extreme situations of life threading aggression are the fighting aspects of the art brought into play. The fighting arts themselves are designed to bring the opponent to the awareness of their wrong doing rather than to harm them. Kosho Ryu is the development of restraint, propriety, humbleness and integrity.

Dissertation on the Origins and Development of Shuri-ryu

History of British Karate and Jujutsu