Renbukai Karate is renowned as a full-contact martial arts style. It was the first style to make extensive use of Bogu (protective equipment) in sparring, which allowed for realistic full-contact fighting with fewer casualties.

The Renbukai (Renbukan) movement began at the Kanbukan Dojo at Kudanshita, Tokyo in 1945. The Kanbukan (Korean martial arts place) was hosted by Korean master Geka Yung, a Korean living in Japan, who had trained with Shudokan’s Kanken Toyama, the Master of Tomari te. One of the influential teachers was Hiroyasu Tamae, a student of Shiroma Gusukuma (who was a student of Yasutsune Itosu). Tamae was trained in Chinese kempo, Naha-te and the bo.

Influenced by Minoru Okamoto, Masayuki Koide, in 1950, Norio Nakamura, a 4th dan in Kendo and judo, brought in the Kendo influence leading to the development of Bogu for karate, along with the inclusion of judo style sweeps and throws. In 1951 the Kanbukan changed its name to Renbukan (training martial arts place). Master Norio Nakamura became first director of the Renbukan after Geka Yung move back to Korea.

In 1964 the school took on the name renbukai and became a distinct style.

It was after World War II, that Master Geka Yung opened the Kanbukan Dojo to give young Korean’s living in Japan the opportunity to study martial arts. Other Master instructors teaching at the school included Mas Oyama, Founder of Kyokushinkai and Mr. Kinjyo, founder of Kenkyukai, among others.

After the war, the United States occupied Japan, and the Japanese government was controlled by the GHQ (General Headquater). GHQ also controlled Japanese martial arts organizations. As a rather new martial art in Japan, karate was not one of the arts that was prohibit. When armor and weapons from Kendo were confiscated and began to be disposed of, armor was purchased cheaply for practicing full contact karate sparring.

Most major masters of karate continued to have their students compete without armor, but some instructor joined Kanbukan and fought full contact with armor.

The Renbukan held the first All Japan Karate Tournament at the Kyoritsu Kodo auditorium in Kanda, Tokyo, Japan in 1959. It was the first open karate tournament in Japan which was broadcast on television.

Also in 1959, Renbukan established the Japan Karatedo Federation Renbukai which became the JKF or All Japan Karate do Federation in 1964, bringing together Shotokan, wado-ryu, Shito-ryu in a united organization of many styles of karate.

Renbukai is still one of the few martial arts styles to practice full contact karate with protective gear and the style has around 300,000 practitioners in Japan. The style never became popular with Westerners as no English is spoken in Renbukai schools in Japan and practitioners must attain a 4th dan or higher to be allowed to instruct. Renbukai Karate stresses physical techniques of striking, kicking and throwing by strong offensive action.

Renbukai Karate practitioner, Ron Marchini brought attention to the style in the United States when he was ranked as the number one fighter in America by Black Belt Magazine in 1969 and 1970. 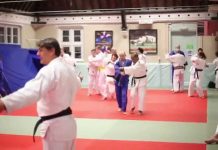 The Origins and Development of Shuri-Ryu By Robert Trias

Gordon Richiusa - November 9, 2011
We use cookies to ensure that we give you the best experience on our website. If you continue to use this site we will assume that you are happy with it.OkRead more