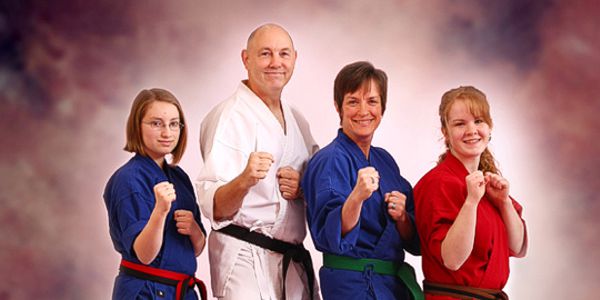 “Karate” is a term made up of two Japanese words, “kara” and “te” meaning “empty hand”. It is one kind of self defense system from one country, Japan. Many countries have their own self defense systems and some of them have many systems. For example, China has over 400 systems of Kung Fu. That’s not counting the weapons arts and wrestling they also have. Japan has over 100 types of karate. So what is American Freestyle Karate? It is an American type of karate. I’ll explain.

Most styles of karate differ because of the following reasons:

The Japanese martial arts were governed by its principal weapon, the sword. Sword fights usually lasted one or two exchanges. That has influenced the Japanese viewpoint so that they emphasize the “one punch kill” coming from the one cut kill.

This also came out of Okinawa where they were taken over and ruled by the Japanese. Only the Japanese were allowed weapons so the Okinawans had to develop a martial art that could overcome someone who had a weapon and who wore armor. They only had one chance so they developed their fists to be as hard as stone so they could break through the armor and kill their attacker.

In Korea, it is an insult to punch someone in the face, but totally okay to kick them there. This has given rise to a kick-oriented art.

You can see how the culture that an art comes from tends to stylize the art, effective within their area of expertise, but vulnerable outside it. A kicker will be in trouble if a wrestler gets inside of their kick and a boxer’s jab can frustrate a one punch artist.

In the U.S., We take what works and apply it. We are not bound by a cultural tradition, that is to say, doing it a certain way because that was the way it’s been done for years. This idea was the beginning of American Freestyle Karate. Now let’s take a look at the title itself.

AMERICAN – I am an American teaching in America. I speak the language and understand the culture. Although the Oriental values are more popularized, the American culture has many of the same values; truth, hard work, respect, honesty, loyalty, honor, and working together with others. These are what we teach to our students, all good American values.

FREESTYLE – This implies an inclusiveness of all the possibilities. If you can only kick, you will be in trouble if a wrestler gets you on the ground. There are limitations in an only one or two way approach. American Freestyle Karate includes punching, kicking, joint locking, grappling moves as well as long range to close in fighting. In short, any kind of possible fight situation you might find yourself in is covered in our training.

Weapons are included by added Filipino Modern Arnis (stick fighting) to our karate teaching. The whole idea is to be prepared for whatever an opponent may do.

American Freestyle Karate is not a “take the best from each style” approach. It’s just one of being prepared.

KARATE – This is a term that is generally understood by all Americans that means an unarmed martial art. Also, it is the art that I studied. If I had studied taekwondo (Korean style) or kung fu (Chinese style, it could’ve ended being up named American Freestyle Kung Fu … but it isn’t.

This gives you the basic viewpoint behind the name of the kind of karate that we do. That it is an American style shows that the evolution of it has continued.

When you study the history of martial arts you will find that it originated in India, spread up through China into Korea and Okinawa, then into Japan. This is basically the path of the art that has ended up as karate. From there it was exported out to the western world. Ours is one of the last legs of that journey.

We have taken an Oriental art and have molded it to our culture, coming up with an American martial art. American Freestyle Karate was founded by Dan Anderson.