INTRODUCTION
In the ancient world, men lived or died by their strength at arms. In the land now known as Thailand, warriors fought countless battles for survival, relying on combat techniques that were among the deadliest in existence. In that time before guns, wars were fought at close range with arrows, spears, swords, farming tools, knives and a myriad of other – implements.

When weapons broke or were lost, those Old World combatants continued to wage war with their fists, elbows, knees and feet. Thus, the deadly war art of Thailand was forged and tested in blood and battle. Ultimately the ancient system was codified and given a name: Krabi-Krabong.

ORIGINS
Krabi-Krabong evolved over hundreds of years of struggle and countless battles with Burma and other nearby countries. It developed, into a dynamic battlefield art that encompassed a complete system of strategy and tactics for both armed and unarmed combat. Krabi-Krabong is the martial art from which Thai Boxing is claimed to have descended. A few dedicated Thai martial artists still practice Krabi-Krabong, preserving the art’s rich tradition and deadly methodology. Pedro Villalobos Solana is one of a small number of non-Thai instructors active in the United States.

A native of Spain who now resides in Atlanta, Georgia, he studied the art in Thailand under Ajarn Vira Yhut and Ajarn Sila. He received his certification from the Buddhai Swan Sword Fighting Institute in Nongkam, near Bangkok, and now teaches it at the Thailand Arts Institute in Atlanta. 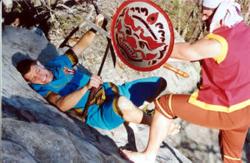 “Krabi-Krabong is a mix of many different styles,” Villalobos says. “During times of peace, ancient travelers and immigrants from different Asian countries made their way to the land now known as Thailand. They brought fighting techniques, and the war masters learned, integrated and blended techniques from these

many places. New techniques were tested in battle and retained only if found to be effective. The death toll was high in those close-contact battles of old. “There were many casualties’ Villalobos says. ” New soldiers had to learn how to fight very quickly. Because Krabi-Krabong was developed to meet the needs of those replacement soldiers, it was designed around two key principles: simplicity and effectiveness. “The result was a system that a new fighter could learn quickly and apply in combat immediately,” Villalobos says. “Krabi-Krabong is practical, not fancy.”

Krabi-Krabong grew to include techniques for -using numerous weapons, but no matter which one was used, the associated footwork remained the same as it did for empty hand fighting. This principle of simplicity meant that a soldier could learn the footwork, then concentrate on weapons and bare-hand techniques with minimal distraction. For hundreds of years, Krabi-Krabong continued to evolve. At its zenith; it was the equal of any fighting system in the ancient world. As the technology of war progressed, however, the need for the old skills gradually faded. Spears and war axes gave way to guns and bombs. Empty-hand fighting on the battlefield became increasingly rare. The masters grew old and then died, leaving their art to civilian successors. It is in these hands that Krabi-Krabong now rests.

Like most modern-day instructors, Villalobos is determined to pass on the techniques and rituals of the ancient way as completely and accurately as possible. He does so to honor those who came before him and to ensure that future fighters will have a tangible link to the past.

WEAPONS AND EMPTY HAND
At the Thailand Arts Institute, Villalobos teaches many of the ancient system’s weapons. “The weapons of Krabi-Krabong are for fighting at different ranges,” he says. “There are close-range weapons such as the knife, mai sok ax and a variety of handheld farming implements. The middle-range, weapons include, but are not limited to, spears, single and double swords, and the long staff.” For longer ranges, the Thai fighters relied on bows and arrows, as well as long spears, elephant spears and throwing spears. 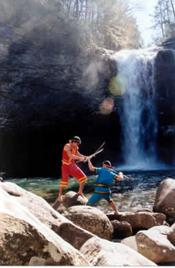 Some of those long-range weapons could also be used while mounted, Villalobos says. The empty-hand component of Krabi-Krabong is sometimes called Muay Thai Boran, which translates as “Old Muay Thai”. Modern Thai Boxing is believed to have been extrapolated from Muay Thai Boran early in the 20th century. Not surprisingly, the two arts are built upon the same principles.

Krabi-Krabong footwork is similar to that of modern Thai Boxing, but it differs in directional orientation. While ring fighters face only one opponent at a time, battlefield fighters had to face violence from many opponents on all sides. Another major difference between the ancient way of fighting and the modern way of competing is intent, Villalobos says. Krabi-Krabong teaches students how to dispatch multiple enemies as quickly and efficiently as possible. In contrast, Muay Thai fighters strive only for the knockout. “As violent as today’s Thai boxing may seem to Westerners, its brutality is just a shadow of its deadly parent art; Krabi-Krabong,” Villalobos says.

Thai Boxing might rightly be called “Krabi-Krabong Lite.” This observation takes nothing away from the art and sport of Thai boxing, Villalobos says, for it is without a doubt one of the most ferocious and effective ring arts of the modern world. The ancient and the modern way simply have different objectives.

RITUALS
The rituals, forms and dances of Krabi-Krabong are just as important as the fighting techniques, Villalobos says. “I hear people say, `Take away the rituals: They claim that the rituals are just stupid forms for dancing, that they are not necessary’. 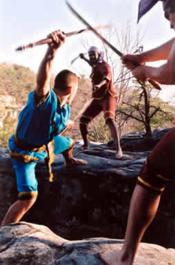 He disagrees. “It is important to learn more than just the fighting techniques. It is necessary to learn the dances and the music. It is important to pass on everything about Krabi-Krabong so we can keep the cultural and spiritual integrity of the art. If you lose the physical part you cannot fight, but if you lose the spirit you may become a bully.”

With his dedication to those old ways, Villalobos is a self-described “bridge” over which Krabi-Krabong can travel from East to West. “I have two new goals to advance my knowledge of the ritual side of Krabi-Krabong during my next several trips to Thailand,” he says. “First, I will learn to play the ritual drums. Second, I will learn how to forge Krabi-Krabong swords. I will study sword building under a master in Thailand. To understand how everything in the art works is extremely important to me”. A good teacher does not study only technique, Villalobos claims. He must devote his life to studying all aspects of the art that he passes down to the next generation. “The more you know, the more you know you need to know,” he says.