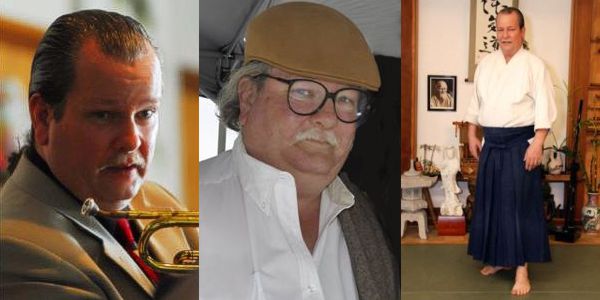 Martial Arts
Beginning his training in 1967, Shintaikido Kaiso Dave Bendigkeit has earned a 6th Degree Black Belt under Grand Master Bob Maschmeier, and a Shodan in Aikido with Patricia Hendricks Sensei. He is the founder (Kaiso) of Shintaikido. He is certified as a teacher of Tai Chi Chuan and Chi Gung. He has trained in Sil Lum Fut Ga with Sifu Andy Ching and in knife fighting with Kuk Sa Nim Michael DeAlba and Professor Cliff Stewart. He has taught at numerous seminars, including the San Jose Gasshuku, and at various dojos throughout the San Francisco bay area. He is the founder of Ki-Works, a system of energy training for people from all walks of life. Sensei’s goal has been to continue expanding the scope of his own art in the spirit of friendship and sharing.

Shintaikido is a martial art developed and taught by Sensei Dave Bendigkeit. Shintaikido is taught as a traditional martial art, allowing a person under attack to make a choice as to whether to be a street fighter, a martial artist, or to step aside and move on. The main goal of training is to be able to instantly adapt to any situation with the appropriate reaction and level of force. Constant attention is paid to learning to flow different parts of each technique together. Shintaikido practitioners are taught to focus on the energy aspects of the situation, viewing the resolution of conflict to be a process of healing the mind, body, and spirit of all of the people involved. Adults also learn to be extremely violent when necessary.

Massage Therapy
In 1967, Dave Bendigkeit began his training in the martial art of Aikido with Robert Nadeau Sensei. Nadeau Sensei helped to encourage his interest in the energy and healing aspects of the martial arts. Since then he has earned Black Belts in Aikido and Kajukenbo, and is the founder of Shintaikido. Through years of study and practice in ki healing, shiatsu and traditional massage, and movement training, Dave has developed Ki-Works, a system of energy training that provides relief from many of the stresses of modern day life. Trained by Professor James Muro, he is a practitioner and certified instructor of Okazaki Long Life Massage Therapy. He is a certified practitioner of G-Jo Acupressure. He teaches massage classes, Okazaki Restoration Therapy Certification courses and has conducted numerous workshops throughout the San Francisco bay area.

“Sensei Dave has a heart of GOLD that is true and sincere – a quality that I respect the most.” Grandmaster Ming Lum – Sil Lum Fut Ga – Hawaii

“Sensei Dave Bendigkeit is a true martial artist. He is willing to learn from anyone who will teach and teach anyone who is willing to learn.I am proud that he is carrying on the tradition of ‘train hard, be humble, and fight dirty’.”
Grand Master Bob Maschmeier – 9th Degree Black Belt – Kajukenbo

“I’m so proud of your accomplishments in all your arts. You are an inspiration.”
Patricia Hendricks Sensei – Rokudan – Aikido