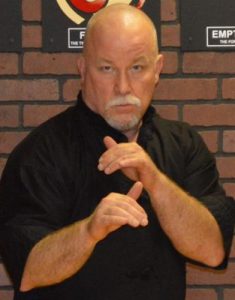 Lamar Davis has been actively training in the martial arts for 50 years. He is certified as a Full Senior Master Instructor of Jun Fan Gung Fu and Jeet Kune Do by five of Bruce Lee’s original first generation students. His last promotion was awarded on September 21, 2014 by Sifu Leo Fong (original first generation Bruce Lee student from the Oakland period). The promotion was to 9th Level Master Instructor in Jun Fan Gung Fu, Jeet Kune Lamar Davis teaches Jun Fan Gung fu and Jeet Kune Do at his private martial arts training facility in Oneonta, Alabama, which is open to only a few privileged students. He is the founder of the Hardcore Jeet Kune Do approach to training in Bruce Lee’s original methods and is not an advocate of the “JKD Concepts” approach. He is the founder of the G.A.S.P. Program (Girls Against Street Predators) and the B.L.A.S.T. Program (Bruce Lee’s Advanced Street Tactics). It is his belief that Wing Chun Gung fu is the very foundation structure of Bruce Lee’s Jeet Kune Do, and without the Wing Chun elements, it is just “kickboxing with the power side forward.”

Sifu Lamar Davis is the author of the highly acclaimed book, Jun Fan/Jeet Kune Do Scientific Streetfighting, SCIENTIFIC STREETFIGHTING, The Art and Science of Jeet Kune Do book series, and JEET KUNE DO, Keeping It Simple. He has written over two hundred articles on Jun Fan Gung Fu and Jeet Kune Do, which have been published in martial arts magazines worldwide.

He has had seven cover appearances. He currently has over 50 instructional DVD’s in release world-wide, with more in the advanced planning stages. In July of 2010 he shot a three DVD set for Black Belt Magazine titled, Jeet Kune Do for the Advanced Practitioner, which is the first actual Jeet Kune Do series ever done by Black Belt.

Lamar Davis is the Executive Director/Senior Instructor of the Hardcore Jeet Kune Do Chinese Gung Fu Association, which has members worldwide. He is the owner of Dragon Blast Martial Arts Supplies, designing and building unique custom training equipment for Wing Chun Gung Fu and Jeet Kune Do practitioners. He builds every piece of Dragon Blast equipment himself, start to finish!

He is in charge of the Jeet Kune Do Division of the International Wing Chun/Jeet Kune Do Alliance. He is the co-founder, along with Sifu Mark Ashton (son of Herb Jackson, original first generation Bruce Lee student), and Senior Instructor of the Dynamic Synergy Jeet Kune Do Method. He has been the featured instructor at the world renowned WIND and ROCK training camp. He teaches six training camps a year, as well as numerous seminars all over the world. He is one of the most recognized and sought after instructors in Jeet Kune Do.

Sifu Lamar Davis has been inducted into the World Martial Arts Hall of Fame twice, the Universal Martial Arts Hall of Fame and Martial Arts Living Legends. After achieving Full Instructor degrees in seven different martial arts, Sifu Davis turned his full attention to Jun Fan Gung Fu and Jeet Kune Do, the fighting methods developed, practiced, and taught by the late Lee Jun Fan (Bruce Lee). He has concentrated on nothing but Wing Chun Gung Fu, Jun Fan Gung Fu, and Bruce Lee’s Jeet Kune Do for the past 39 years. Today he is considered to be one of the world’s foremost living authorities on Bruce Lee and his martial arts methods.