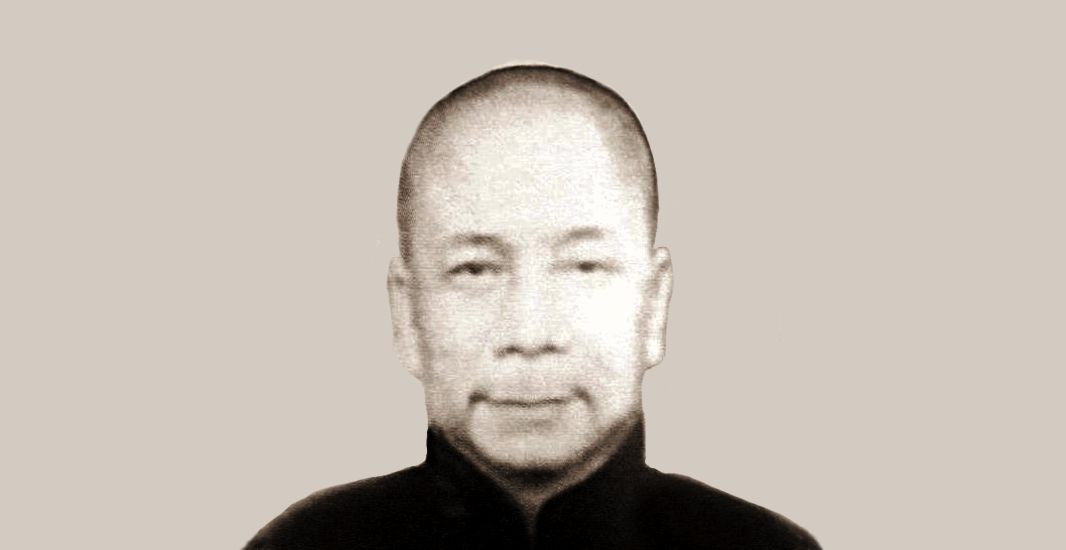 Leung Jan, aka Leung Tsan; Mandarin Chinese: Liang Zan) was a Wing Chun practitioner and a Chinese herbal doctor in Foshan, Guangdong, China. He became well-known as a winning competitor. He was known as Mr. Jan from Foshan.

Leung Jan, originally named Leung Dak Wing (Liang Derong), was born between 1816 and 1826 [End of the Chia Ching (Jia Qing) period of the Ching (Qing) Dynasty 1796–1820], though accounts vary on the exact date of his birth. Leung Jan’s father was an herbal doctor with a pharmacy on Fai Jee Street. Leung Jan was the youngest of two sons born to Dr. Leung. The oldest son, Leung Dak Nam, became a businessman, while the younger Leung Dak Wing followed in his father’s footsteps because of his love of medical knowledge. After his father died in the mid-1850’s, Leung Dak Wing took over the family pharmacy on Fai Jee Street. We are not sure of the name of the pharmacy, but it was known as either Jan Sang Tong, Wing Sang Tong, Hang Lam Tong, Yan Sang Tong or Hang Chai Tong depending on different accounts. Because of his occupation or possibly because of the name of his pharmacy, he came to be called Jan Sin-Sang (Zan Xiansheng, Mr. Jan) or more simply, Jan Sang (Zan Sheng) by the locals.

Leung Jan began learning Wing Chun from members of the King Fa Wui Goon Opera Troupe during the 1840s or early 1850’s depending on which account you hear. He was most likely in his early 20’s, around 24 years old, because he already had enough medical training to take over his father’s clinic. It is commonly believed that Leung Jan started training under Leung Yee-Tai, a Mo Deng performer (male dressed as female)/poler, apprenticing on the Red Boats from the 1840s to 1850s. Leung Jan trained until his father’s death when he left to run the family pharmacy. It is also believed that, during the opera ban in post-1855, Leung Yee Tai and Wong Wah Bo lived in the surrounding area of Foshan. At this time, Leung Jan continued his studies, and some oral traditions credit Leung Jan alongside his second teacher Wong Wah Bo with creating the three hand forms which are the main vehicle for the transmission of the modern Wing Chun system.

Leung Jan won over 300 challenges in which he remained undefeated and this earned him the title of “Wing Chun Kuen Wong” or “King of Wing Chun Fist” over the course of his lifetime. Leung Jan was also one of the first to defeat a wide range of fighters from different martial arts styles using Wing Chun. As is the case for all of the mid-1800s to the early 1900s Wing Chun ancestors, many different and often contradictory accounts of this history exist. Even the name of Leung Jan’s pharmacy has been a long-running source of dispute among Wing Chun masters. It has been said the name was known as either Jan Sang Tong, Wing Sang Tong, Hang Lam Tong, Yan Sang Tong, or Hang Chai Tong in different various traditions. Fung Chun, one of the eldest living members of the Wing Chun clan (as of 2007) and one of the last ‘true’ 4th generation masters, states very clearly that the name of Leung Jan’s pharmacy was Hang Chai Tong. Hang= Apricot; Chai= Tea; Tong= Hall. He states that Leung Jan named the pharmacy in homage to Wu Tung Feng in the 3 periods kingdom (220–265 A.D.) who treated hundreds of thousands of the poor and sick for free in the apricot forest he lived in.

One of the most highly debated topics, however, isn’t the name of Leung Jan’s pharmacy, but of the exact number of children he fathered. Most versions claim that Leung Jan had two sons, named Leung Bik and Leung Chun. Some variants state that Leung Chun was an infirm and died at a young age. Other accounts suggested Leung Jan had a third son, named Leung Suen. The current research by the AWCKRI suggests that Leung Jan actually only had one son, named Leung Chun. He was infirm and died at a very young age. This is substantiated by the fact that when Leung Jan retired back to Koo Lo village, he sold the family business, which in traditional Chinese culture would have naturally been passed down to his son(s). Even the information from Leung Jan’s last living grand-student, Fung Chun, varies from account to account. Sometimes going as far as suggesting that Leung Jan had five sons, Leung Bik, Leung Jee, Leung Chun, Leung Yuen and Leung Ko. This particular account passed on to Leung Ting states (in abbreviated format):

(1) Leung Bik- Nicknamed Dai Siu Bik, was said to have been the most skilled. Some oral accounts suggest he learned at the same time period that Chan Wah Shun was at the school. Oral tradition passed down, in the USA, by students of Henry Mui, suggest that Leung Bik didn’t learn Wing Chun from his father and instead took after his Uncle, becoming a businessman. Learning only enough Wing Chun to defend himself, but certainly not enough to pass the system on in any capacity. While Yip Man oral tradition suggests that Yip Man learned from Leung Bik after Chan Wah Shun died. Some stories borderlining on the absurd, suggest that Leung Jan taught Chan Wah Shun incorrectly and only his Son Leung Bik learned the “Real” Wing Chun System. However, it is commonly known that there have been manuscripts that Yip Man obtained discussing medicine and Wing Chun concepts from Leung Bik which suggest the validity of Leung Bik.

(2) Leung Jee- Nicknamed Dou Pei Jee (small poxed Jee) taught some students in Vietnam at the Kwangtung Wui Goon or Association of the Cantonese. Modern research suggests this is a mixing of oral accounts, as Yuen Kay Shan’s elder brother, Yuen Chai Wan, was pocked-faced and traveled to Vietnam in 1936, to teach Wing Chun Kuen to immigrants from Canton. He doesn’t show up in any other accounts as a son of Leung Jan’s other than Fung Chun’s account to Leung Ting.

(3) Leung Chun- Said to have had the highest achievement in medicine. By modern research, as of 2007, is considered the only real child Leung Jan had. He was said to have died at a very young age.

(4) Leung Yuen- Did not learn Wing Chun Kuen, and almost nothing is known of him. He only shows up in the oral account Fung Chun relates to Leung Ting, during his 1999 visit to Koo Lo village.

(5) Leung Ko- Supposedly very naughty, and the best fighter of the five brothers. Again, Ko doesn’t show up in any other tradition other than what Fung Chun related to Leung Ting.

It has been said by recent visits to Koo Lo village by members of the AWCKRI, that Fung Chun admittedly thought Leung Ting was going to try to make money off of what he learned during his visit to Koo Lo village. So Old Fung Chun had some fun with him.

In 1885 (or 1898, depending on the account), at the age of 73, Leung Jan retired to his native village of Koo Lo, Heshan county, where he taught the Wing Chun System to a few local students, such as Wong Sum Wah, Leung Bak Cheung, and Yik Ying. Again in some accounts it is said that Yim Sei also learned. It is important to note that Fung Keung, son of Fung Chun, supports the fact that there were only three students that learned from Leung Jan during this period of teaching in Koo Lo village, before dying at the age of 76.

The system he passed on at his time, differed from what he taught in Foshan. In Koo Lo village he taught a very compact San Sik method. Some suggest this was his final synthesis of the Wing Chun system. But modern research by the AWCKRI suggest that the San Sik method was part of the original teachings of the Wing Chun Kuen system, and was what Leung Jan learned on the Red Boats from Leung Yee Tai.

Leung Jan’s popularity never really faded as he was still a hero to the people well up into the 20th century, with many pulp novels relating his adventures. In modern times, the film screen as been graced by various incarnations of Leung Jan, including the movies Prodigal Son, Descendant of Wing Chun and Warriors 2.

Side Note: There are differing explanations for the change in Leung Jan’s name. In one, he chose the name Jan, thinking it sounded more professional for an osteopath. In another, the hand-written sign for ‘Wing’ on his shop was so often misread as ‘Jan’ that he eventually began to answer to that name.

Leung Jan, as an already somewhat skilled martial artist, is featured in a student role in Sammo Hung’s The Prodigal Son. In this fictional tale of his life, Yuen Biao as Leung Jan, is a young man determined to learn real martial arts after a humiliating defeat by undercover Wing Chun master Leung Yee-tai who is a seemingly harmless man, despite Leung Jan being known as Foshan’s “kung fu king”.

He is later featured in, another Sammo Hung produced film, “Warriors Two” (1978), this time taking on the master role as a more disciplined and older man, and now being played by Bryan Leung. Much more skilled and respectful than his younger movie counterpart played by Yuen Biao, he takes up the student Chan Wah-shun, alongside a few other ones he is already training, but is caught up in an elaborate scheme by Foshan’s new mayor. The mayor plans to remove all top martial artists from the town, so he may rule with an iron fist. Putting both Cashier Wah (Chan Wah Shun), and Leung Jan himself on the mayor’s hitlist.