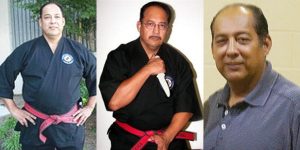 Master Art Gonzalez was the Head Master Instructor for the famed Tenio’s DeCuerdas Eskrima in Stockton, California. Grand Master Art Gonzalez continues to strive for the promotion of Tenio’s Decuerdas Eskrima Concepts; which is a complete American-Filipino Martial Art. His Instructors were the late Grandmaster and Professor Gilbert Tenio and the late Chief Master Instructor and Associate Professor John Eliab, who were both members of Jujitsu America.

After receiving his Masters in 1986, he has been teaching, off and on, the Military: Navy Seals, Marines, Army, Border Patrol, Police, Security Guards and Correctional Officers. He has also taught the Mexican Military and established an Assistant Instructor to teach the following programs: a range of varied weapons programs including Knife to Knife Combat, Hand to Knife Combat, Hand to Hand Combat encompassing Dumog and Buno using our Six Key words (Striking, Choking, Locking, Throwing, Sweeping, and Grabbing arts), Sentry Removal, PR­24 and Baton training for basic arrest and prisoner control tactics, Long Gun and Short Gun disarms, Gun Retention, and other subjects. GM Tenio also stressed heavily the Hilot healing art as part of his martial art. Master Gonzalez is presently learning Seifukujitsu with Professor James Muro and has rejoined Jujitsu America, Kilohana, and AJJF.

“I just heard today that my former teacher Grand Master Art Gonzalez passed away last night. I am without words and truly saddened and devastated by this news. While we may have had our differences and falling out there is no denying that he played a major role in my life, more so as a father figure after my father’s passing, and as my primary martial arts teacher. It is through these roles that he helped shape me into the man and martial artist I am today, a gift I will always appreciate and cherish. He was without question one of the most skilled and ingenious martial artists I have ever had the pleasure to study under. My heart and prayers go out to his family, friends, and the entire Tenio’s DeCuerdas clan. The world lost another skilled warrior.” ~ Mike Cardenas

USAdojo - August 6, 2009
We use cookies to ensure that we give you the best experience on our website. If you continue to use this site we will assume that you are happy with it.OkRead more