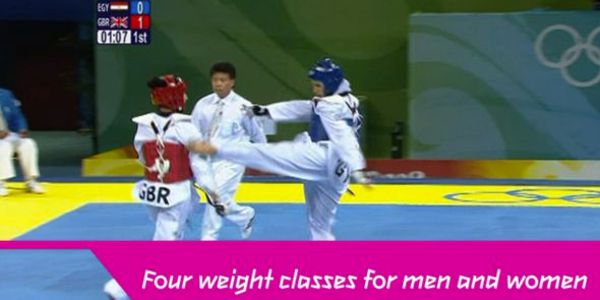 The word Taekwondo translates into English as the way of foot and fist – an accurate description of the principles behind this Korean martial art. Powerful kicks and punches are, literally, the name of the game, which offers tension, drama and plenty of action.

Eight – four weight categories for men and four for women.

128: 64 men and 64 women
Each country is limited to two men and two women across all events, and to only one athlete in any particular event.

History of Taekwondo at the Olympic Games

Taekwondo made its debut as a demonstration sport at the Seoul 1988 Games, but was not officially added to the Olympic program until the Sydney 2000 Games.

Find out more about Taekwondo at the Olympic Games on the International Olympic Committee website.

Each contest is made up of three two-minute rounds. Over their standard white uniform, known as a dobok, competitors wear coloured protective equipment. The competitor wearing blue is referred to as chung, while the competitor in red is hong.

For a complete set of rules, please refer to the website of the World Taekwondo Federation (WTF), governing body for the sport.

In each weight category, the competition consists of a single elimination tournament.

The winners of each contest qualify for the next round, with the two finalists going head to head in the gold medal contest. All competitors who lose to one of the finalists at any stage of the competition enter the repechage. The two semi-final losers meet the winners of the two repechage pools; these matches determine the winners of two bronze medals.

A referee stays in the combat area, while corner judges sit at each corner of the court. The judges award points for valid kicks and punches that are recorded electronically.

Athletes in Taekwondo need strength and stamina as well as excellent technical ability in order to make every punch and kick count for points.

Infringing the rules can see valuable points awarded to the opposition. Penalties range from Kyong-go (a warning penalty) for acts such as crossing the boundary line, hitting below the waist or using the knee to attack. Two Kyong-go warnings result in a point being awarded to the opponent. More seriously, a Gam-Jeom (deduction penalty) is given for actions such as attacking a fallen opponent, or intentionally attacking the face. A Gam-Jeom results in a one-point deduction.

If an athlete receives four penalty deduction points, the contest is stopped and the opponent is declared the winner.

If you want to find out about taekwondo in your country, including clubs, facilities and coaching schemes, check the website of your National Governing Body.

For more information on the Taekwondo competition at London 2012 and the rules, go to the website of the World Taekwondo Federation (WTF), the governing body for the sport.