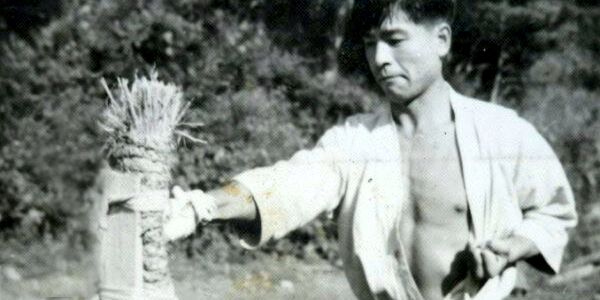 One of the major images in the general public’s perception of Karate is that of Karate practitioners performing feats of breaking wood, tiles etc. In fact there seems no end to the materials that seem to be attacked, even large blocks of ice that would be more at home among the ice flows of the Bearing Sea.

However, I am confining myself to what is loosely known as hand conditioning; by use of the traditional Makiwara. With regards to the wide range of striking aids on the market I give no opinion, and confine myself and these few words to what we would all recognise as the traditional post Makiwara with Japanese rye straw striking head.

Makiwara can come in many different forms, of which each has a different lesson to teach. Coordination, strength, speed. When one truly practices with the Makiwara the gains are tremendous, however the down side can be very serious lifetime injury. That is why very deep thinking should take place before undertaking this type of training. The major problem facing the determined practitioner is that age old one, finding a competent Instructor. One that does truly understand the Makiwara Waza, and can guide you through what will bring about massive changes in bone structure and physical appearance etc. If you are fortunate he will do all in his power to dissuade you from taking such a path as I will do now.

There is no question that children should ever, under any circumstance, undertake Makiwara practice. It is said by some that between 16 and 18 years old a student must have their parent’s permission to undertake such training, permission for what? To have possible arthritics in years to come and malformed hands, problems caused by shock wave to the lung spine, loss of sensitivity and much more! Many of these effect will take years to become apparent, what parent has the right to give that permission?

There is so much clap trap written and advocated on hand etc conditioning it would be hilarious if it was not so dangerous. And the mythology surrounding this type of training are legion, a prime example is that a Shuto can sever the horns of a bull, no human hand can break the horns of a bull, anyone who thinks it can be done should just carry on with their Harry Potter book!

Are you dissuaded yet? You should be! There’s a multitude out there just waiting to get their hands on your hands (couldn’t resist the pun) and of course, your money.

One of the essential ingredients needed for Makiwara practice is the medication that is applied to the different areas of the hand. The real thing is not cheap and you will use a lot of it. A knowledgeable Teacher will identify it for you, however, be aware that you could be easily sold a product that may well be sold as a hair restorer in another country or a claimed remedy for an antisocial disease! It’s a sad fact that I have seen examples of such cons. Still determined?

The straw Makiwara head must be of quality Japanese straw, over the years a look-alike has appeared from the China area which are very cheap; however there is a high risk that under certain conditions they develop fungi. Which, if it get into your system through a scratch, you could be in serious trouble.

I am an admirer of boxers, I admire the skill level and commitment to consistent and rigorous training, and I don’t believe that a boxer can function as a boxer without bag work, likewise there is a school of thought that says that a Karate-Ka does not function without Makiwara training.

Makiwara is a much overlooked aspect of Karate, indeed some Masters believe that without it, a Karate-ka’s effectiveness is dramatically reduced, some even say they become ineffective. The regime is a hard one to follow physically mentally, and yes, spiritually. One must work at it daily through the four seasons. In the beginning daily strikes on either hand may range from 30 to 60, morning and evening. As well as before and after formal practice! To many this number may seem low, however your kime should be to a depth of about 2in and it is usual to have a training partner standing behind the Makiwara post with the palm of there hand about 2in away. The partner must be consistent and diligent in that only strikes that make the Makiwara post slap their hand are counted. So it is easy see why one must start on low numbers.

So, when you can drive the Makiwara post to slap your partners hand 50 times in succession and it is repeatable daily, you will be well on you way to power kime and Mushin.

It has been scientifically measured that a punch trained on the Makiwara can measure up to 2000lbs per square inch, and when repeated again and again, it is awesome to think that the human hand can take that pressure. At this point, the practitioner will have united with the intangible Shin-Gi-Tai.

At this point you may well be asking the question “was I dissuaded or did I under go the practice?” Well I will tell you . . . No. Actually, no I won’t. I will leave that one to your imagination.

Why the Front Squat is the Real Judoka’s Best Friend

2 Stretch Yourself: Difficulties Doing a Side Split