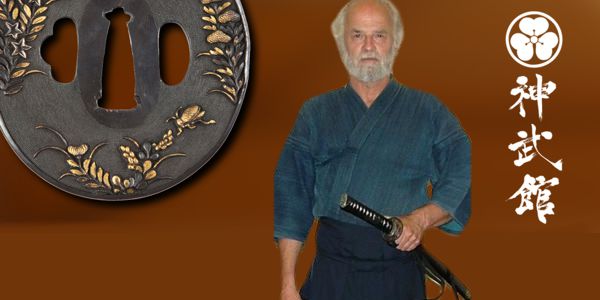 The very word Iai is the subject of numerous grading essays and has many layers of meaning but its basic interpretation seems to be ‘whatever we may be doing or wherever we may be, we must always be prepared’, a philosophy for living.

Iaido is a mid 20th century term developed to replace the more commonly used batto jutsu, the act of drawing the sword combined with an attacking technique. The term became more popular and widely used I believe as a means of making the study of the sword more acceptable to the Occupation Forces in post war Japan and also to reassure Japanese educationalists. As with post war kendo the aim was to emasculate the pre-war sword practices and lose some of the connotations the sword had with the brutalities of the war; a typical Japanese compromise, Jojutsu teachers were more pragmatic in that they kept the techniques but just changed the name of their practice to Jodo!

The very word Iai is the subject of numerous grading essays and has many layers of meaning but its basic interpretation seems to be ‘whatever we may be doing or wherever we may be, we must always be prepared’, a philosophy for living. Its declared aim is to promote the study of the sword not as a means to kill an opponent but as a way to self-development and control of the inner self, a guide to living. Modern Iai is basically divided in two, international iai has been developed by the Zen Nippon Kendo Renmei through the Seitei Iai kata, a modern set of forms aimed originally at introducing the sword to Kendo practitioners but which has now evolved a life of its own. Alongside this is the Zen Nippon Iaido Renmei which is the controlling body for ryuha iai or classical iai schools who are not greatly concerned with seitei and there are other smaller bodies looking after specific styles of iai in Japan. But internationally when one speaks of Iai it is usually that of the ZNKR which predominates through the International Kendo Renmei and its affiliated national bodies.

The term do affixed to iai has a multitude of sins to answer for, it has made do studies a separate issue from jutsu largely as a result of the writings of the late and great Donn Draeger who was the first author to write in English on the subject and saw a clear distinction between the philosophies of the two practices. Donn would have been the first person however to admit that this was merely his personal interpretation and indeed those westerners who have followed in his trail blazing footsteps are recognizing and promoting a far broader and less discriminatory view of do and jutsu, indeed Japanese sensei will often use the two terms indiscriminately in the same sentence and fail to see any difference and cannot understand why we choose to treat the two studies differently.

It is my belief that the difference lies in ones attitude to practice, I have been fortunate in having as my sensei, Vic Cook 7th dan Renshi who advocates practicing seitei forms with the spirit and dynamism of combat even though they may not be true combat forms, otherwise it can and does degenerate into being a mystical ‘sword dance’ if do aspects are taken to the extreme. I have also seen the aggressive techniques of classical battojutsu practiced as a means of meditation by a Zen priest which rather muddies the distinctions between do and jutsu once again. The difference I feel is psychological in part and lies in our own approach to the practice of iai, modern seitei may not have the dynamics or combat effectiveness of koryu or old school but that does not mean the mental approach has to be any different.

Koryu or ‘old school’ tradition of swordsmanship is where the mind expands, our practice of seitei has hopefully taught how sword, body and spirit work together to produce good technique but koryu allows us to use the sword to the full and also rather effectively demolishes one concept of modern iaido, namely that we are reacting only in the face of threat to our person. The oku iai or advanced forms of koryu iai in most traditions are full blooded murder or assassination techniques taking advantage of any weakness or opening an opponent might display, there are methods of drawing and cleaving a trusting colleague when bowing to each other, hiding under walkways or low roofs to surprise someone walking by etc., little sign of the much vaunted noble samurai there!! There is none of the clinical ‘the book says’ swordsmanship ofseitei, koryu techniques can and do have numerous variations of each set of forms depending on how you imagine the scenario, who your teacher was, where he studied and indeed how fit you may be, something for every one in fact. Enormously enjoyable and testing but also tinged with danger especially if wielding a shinken or live sword, the increased tempo and effectiveness of the older classical styles can be a danger to the sword user himself if he oversteps his own ability, walk before you can run.

I must stress that the above views are strictly my own and the product of well over 40 years of practicing Budo, I would always promote the basic establishment texts to any student till I thought they were ready for a broader interpretation and indeed my views are still forming as I continue practice.