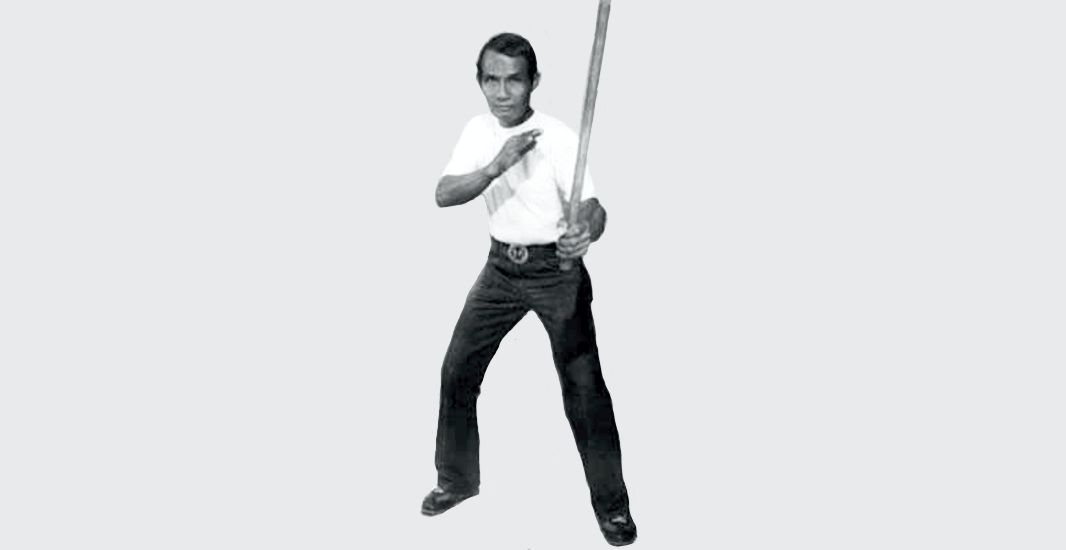 Born June 19, 1915 in San Antonio, Zambales on the island of Luzon in the Philippines, Manuel Aguillon began his training in the fighting arts as a young boy. As a teenager he also found that he had a great desire to use his hands with or without the cane he had learned to fight with. So Manuel Aguillon turned to boxing. He found that boxing demanded  the use of flowing movements of the body coupled with foot and hand coordination. Because of his love for Arnis and boxing, he decided to combine the body movements. Going to Manila and various other cities throughout the Philippines his skills as a boxer grew and soon he became known as ‘Kid Balite.’ Winning many bouts and building his career as a boxer he became a champion in 1938.

Being a champion lasted only a few years as the Philippines were soon occupied by the Japanese. Joining the guerrilla movement, Manuel Aguillon’s unit operated out of the hills and jungles of Zambales Province. He became a Sergeant in his unit and wanted his men to know how to defend themselves with or without a weapon, and he trained each man to become an expert in the art of hand-to-hand combat. It was during this time that Manuel Aguillon also trained with other experts in Filipino stick fighting and added their knowledge to his own.

Upon liberation of the Philippines, Manuel Aguillon traveled to Guam to work in the shipyard and to continued his boxing career. Returning to the Philippines he entered the field of law enforcement in San Antonio, Zambales. During this time he gained great respect and it became routine for people to request his assistance in solving confrontations, even when other officers were present. This continued whether Manuel Aguillon was on duty or off. Known for his tactical abilities, people were amazed that he handled situations with his persuasive personality rather that with his martial arts or a gun. In the six years that Manuel Aguillon was in law enforcement, he was never known to use his firearm.

With his experience in law enforcement and his reputation in handling situations, Manuel Aguillon was elected to a government official as Barrio Captain of San Nicholas, Zambales. He served two terms in this position. After retiring his passion for arnis and boxing continued as he was always teaching and promoting both arts. Sponsoring boxing matches at events from Olangapo to the very northern parts of Zambales.

Even though teaching was Manuel Aguillon passion, money was needed to support his family, so he went to work at the San Maguel Naval Communication Station, in San Antonio, Zambales working at the base gymnasium. Even on the Naval base Pundador Manuel Aguillon became known for his knowledge in arnis and boxing, and people would seek him out constantly for instruction. Working during the day, at night his students would come to his home for training.

To become a student of Pundador Manuel Aguillon, and to be allowed to learn his family art, was an opportunity that only few would receive. This was because Pundador Manuel Aguillon had high standards of trust, conduct, personality, and morality for his personal student. As Aguillon taught, he would help students discover their weaknesses and strengths. This way he could better instruct the student, building weaknesses into an equal relationship with ones strengths.

Trovador Ramos, one of Pundador Manuel Aguillon’s students, later became a film celebrity in Hong Kong and throughout the Philippines and used the philosophies learned from Pundador Aguillon. He later established his own organization of TRACMA which stands for Trovador Ramos Consolidated Martial Arts – of Combat Judo and Karate. Grandmaster Ramos was only one of always Pundador Manuel Aguillon who showed the highest respect to Pundador for sharing his knowledge with him.

Throughout his life, Pundador Manuel Aguillon reached out for knowledge, either from other Arnisadors, Grandmasters, and Masters of other fighting arts and books when available. He was constantly practicing and combining his family’s stick fight art with any fighting art that would blend in with his philosophies. Manuel found that the graceful movements of other martial arts such Judo, Ju Jitsu, Karate, Kung Fu, coupled with the swift hand and foot fighting techniques of boxing, made a distinct and characteristic form of Arnis into a Scientific Filipino Martial Art.

As the years passed Manuel Aguillon guarded his family’s art. He Remained selective of his students, and would only teach those who he found had high morale standards. So, upon his death on January 8, 1991, there were only a handful of students known to have gained his knowledge of Aguillon Arnis.

Grandmaster Manuel Molina Aguillon Sr. his qualified instructors in the Philippines and they continue to teach in an informal atmosphere, taking few students, and continuing to maintain the high standards which Pundador promulgated.

Pundador’s wife Consolacion Mata Aguillon passed away in 1995. They left behind four daughters and one son. Named by his surviving family members as the most senior student and Executor of the Arnis Balite system, Punong Guro Steven K. Dowd, has been appointed by the family to carry on Pundador Manuel Aguillon’s art and philosophies.