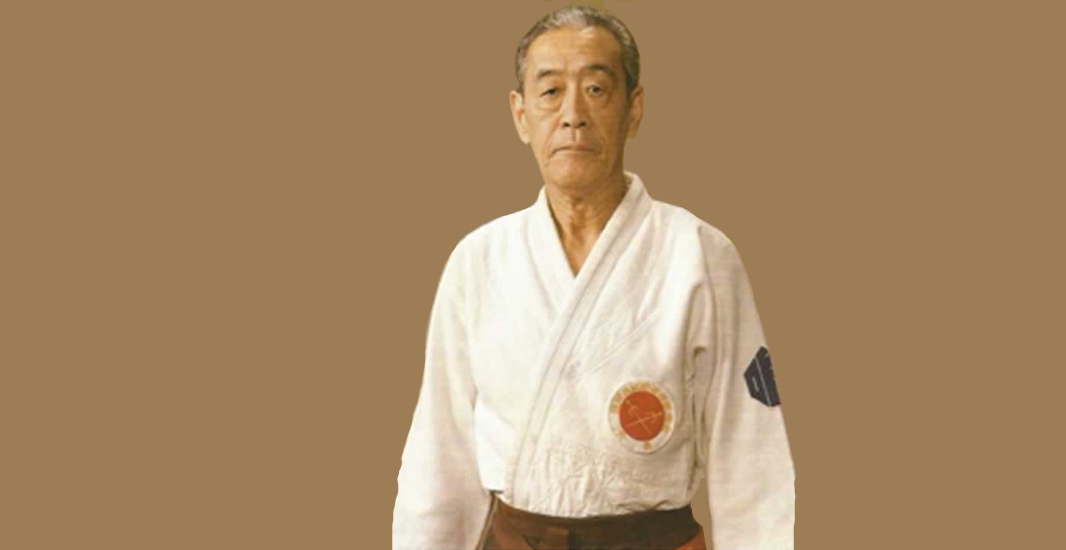 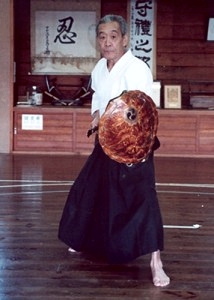 Japanese kobu-jutsu master, Motokatsu Inoue was the Grandmaster of Yui Shin Kai and Ryukyu Kobujutsu. He was born in Tokyo, Japan in 1918. Inoue’s father was a general in the Japanese army, and his mother was the grandaughter of Inoue Kaoru, who was a former Prime Minister of Japan. His grandfather, Katsunosuke Inoue, was British Ambassador from 1913-1917. Because of the nobel status of his family Motokatsu Inoue was privileged to study martial arts at a young age. He begin his study of jujutsu at the age of 10 under Fujita Seiko.

Seiko Fujita was Motokatsu father’s body guard and was the 14th Head Master of the Koga Ryu Wada Ha family of Ninjutsu and a man of mystery. Fujita felt that Karate was far too linear and Aikido, too circular, for their practical use in close contact fighting. Fujita style was a very aggressive form of Jujitsu and Aiki with particular emphasis on attacking the eyes, throat and groin using open hand techniques and low kicks.

Seiko Fujita also taught the young Inoue weapons, as Fujita was skilled at using any item as a weapon. Fujita prefered Ninjitsu weapons, especially the Shuriken Jutsu or iron darts of the Shingetsu Ryu where they they used knives and short arrows as well as the star shaped Shaken. The basis, however, was always from the straight iron darts, around 8 inches in length.

By the age of 18, Motokatsu Inoue had obtained a good understanding of Jujitsu, Shuriken Jutsu and had learned Jo Bo Jutsu (Jo-Jitsu of Diaen Ryu) using a jo which is fifty inches long and one inch in diameter. Fujita instructed Inoue to study Sumo while he attended Keio University, from which Inoue graduated in 1941. At this point in time Fujita realized that to be well rounded in the martial arts it would be necessary to have Motokatsu study karate jutsu under Sensei Yasuhiro Konishi, the founder of the Shindo Shizen Ryu. Sensei Yasuhiro Konishi had studied with many of the great Okinawan Masters including Funakoshi, Motobu, Mabuni and Ohtsuka, and his emphasis on kata and free fighting would give Inoue Sensei an even more extensive knowledge of the arts.

Fujita also sent Inoue to study Aiki with Gozo Shioda, one of Ueshiba’s top disciples who formed his own school, Yoshin Aikido, which is more oriented toward combat than Ueshiba’s Aikido. Shioda trained and graded Motokatsu Inoue up to 3rd dan.

Konishi was a strict teacher and was the person who introduced Inoue to Shinken Taira, who was probably the greatest weapons expert of his time. Taira trained under Moden Yabiku and traveled often to Japan, carrying 20 bo and 10 sai, plus a rucksack on his back – even at the age of 60. He developed the manji-no-sai and founded the Society for Promotion and Preservation of Ryukyu Martial Arts. This weapons society practices all 8 of the Okinawan classical weapons, and all the combined katas of the Naha, Shuri, Aragaki and Tomari styles of which there is 107.

Due to politics and a desire to retain control of the Ryukyu Kobudo Association in Okinawa by an Okinawan, Akimine Sensei became the next president of the Society for Promotion and Preservation of Ryukyu Martial Arts instead of Sensei Motokatsu Inoue, who was the rightful heir at the time of Shinken Taira’s death in 1970.

Sensei Motokatsu Inoue passed away in 1993.

No bias in Training Methods, if a technique is good, wherever it comes from, then use it. ~ Motokatsu Inoue

For every technique in Kobujutsu, there is a corresponding one in Karate. ~ Motokatsu Inoue

Kobujutsu is important to Karate: Weapons, throws, arm locks, etc… should all be part of our karate armoury. If you practise Karate without weapons, you have a weak link in your training, likewise if you are unable to apply locks and perform throws. ~ Motokatsu Inoue

People think that if you study weapons you must always carry something to fight with: This is not so. When you are proficient with weapons you not only know how to use things around you to fight with, but you also learn distance appreciation and not to be intimidated by an opponent with a weapon. ~ Motokatsu Inoue