At midnight on July 20, 212 in Aurora, Colorado James Holmes, 24, slipped into a movie theater, stood in front of the movie screen that was premiering the new Batman film, and threw a hissing gas canister into the room. It was intended to explode like a bomb. He then started shooting people and instantly killed 12 people and wounded 59 others.

Anyone who has takes my one-day Reality-Based Personal Protection Terrorism Survival course receives small-arms attack defense training, and I cover Public Space Security, and also specifically talk about movie theater attacks as well. This is not the first time in history an attack has taken place in a movie theater. Public Space Security is any place that the public gathers and can be the target of a criminal or terrorist attack: sporting event, monument, place of worship, restaurant, parade, etc.

That morning I climbed out of bed and went to the Gym for my morning workout. I always watch the news while I do my exercises, this shooting is how I started this day. I listened to the commentators asking security experts, “Why can’t there be police or security officers in every movie theater?” Of course, this is the question many people have who don’t understand security issues. It is impossible to have an armed security guard or police officer in every movie theater in the country. First, it is cost prohibited, and second it would only address one “soft target” out of the millions available. This is the same reason there are not U.S. Air Marshals on every flight in America, for there are approximately 28,000 commercial flights every day, even after 9/11 and the many threats to aviation every year. Even if there had been armed security in the movie theater that James Holmes was shooting in, most large movie theaters have several movies playing at the same time in different rooms. By the time an officer arrives the deed is done. In this case James Holmes ran out of the theater after the shooting and was arrested by the police nearby. This is when the police shine, usually right after the initial attack. Once they respond they usually limit any more damage the shooter does, and eventually shoots the suspect or make the arrest. For the 12 dead in the movie theater the arrival of the police means nothing. 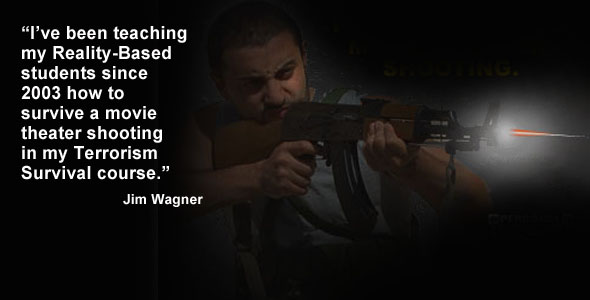 Since first writing a monthly column for the martial arts community in 1999 through Black Belt magazine, followed by my book Reality-Based Personal Protection (Chapter 6 Terrorism Survival, page 274 for Small-Arms Attacks), I have insisted that martial artist instructors take seriously the teaching of self-defense, include training in how to survive small-arms attacks, and today’s tragic theater shooting highlights why.

Based upon my training and experience (over 20 years in law enforcement that includes counterterrorism) I have simulated many office massacres, school shootings, and full-scale terrorist attacks in many countries around the world. I have also used my students as the attackers often times only giving them the instructions, “Just go out there and kill people.”  Watching them helps me study the psychology of the shooters. This way we can better understand the dynamics of an Active Shooter using safety equipment and Airsoft guns. From this research I have found certain consistencies among the attacks and they are:

Active Shooters tend to go for the “center mass” of a group of people; that is to say the tightest concentration of people and not individuals along the peripheral.

Once the Active Shooter has a target go down he immediately moves on to the next target, which is the “arcade mentality,” a type of blood lust. The Active Shooter desires to engage more targets, and as long as a previous target is no longer moving or gaining attention, the Active Shooter moves on. Therefore, if you are in the middle of a group that is gunned down and you go to the ground wounded or pretend that you are dead the odds are in your favor that the Active Shooter will move on to other people to shoot. I have a video on my YouTube channel jimwagnerrbpp titled Jim Wagner my self-defense instructor: playing dead during a shooting that will teach you step-by-step on how to play dead.

Active Shooters when faced with a “target rich environment,” that is to say, many people to shoot, tend not to look for those few individuals hiding behind things, and not moving (even in a kneeling or sitting position next to a wall); running away if you cannot get to cover in time definitely draws the bad guy’s attention, and you may end up in his gun sights. In the future you may very well end up in the very room that the Active Shooter begins his or her assault, however, you could also be in an adjoining room or down the hallway. If this is the case you will definitely have more options and a great chance of survival if you know what to do and think quick. In another one of my videos on YouTube, entitled Jim Wagner my self-defense instructor: office massacre and school shooting survival.

News reports and “experts” love to talk about tighter gun controls and how to try to detect criminal behavior in people to prevent future incidents, and that is all well and fine, but my videos teach you what to do if you are right in the middle of a conflict situation and your very life depends upon it.

When I go to a movie theater and I am not armed with a firearm, (I am going tonight to watch the new Batman film with friends tonight), I always sit next to a wall; away from center mass. If a shooting occurs I can go down on the floor, which in a dark movie theater is quite an advantage, and blend in with the wall. I prefer to be next to an exit, which means toward the back of the theater. In fact, I prefer always to be seated next to an exit in a public place be it a restaurant, concert, place of worship, etc. Not only is this wise if I have to escape a gunman executing people, but it is also prudent should a structure fire break out. How many times have you heard stories where many people were killed in a nightclub when a fire broke out? Now, I may not always get the luxury of picking a seat near an exit, but if I can’t be seated next to one I definitely note where the exits are and formulate a quick plan on how to get there if I need to. When James Holmes entered the theater witnesses say he entered through an exit. I’m not sure whether it was the front or the back exit, but had you or I been sitting next to the exit that he came through our situational awareness would have immediately alerted us to the entrance opening and the red flag would have gone up in our minds; especially seeing him with a hissing gas canister. Perhaps we could have jumped him just after he tossed the container and just before he started shooting. We might have gotten him down immediately, before other people realized what was happening. We may have been able to put a few rounds into him as he started shooting at others, if we were legally armed (concealed weapons permit or off-duty police officer). Maybe we could have escaped out the same exit he entered. Who knows what we would have done based upon our training, but we would not just sit there and do nothing or make common mistakes that untrained people do during such attacks. Obviously, if a gunman comes through an entrance and you are the first person he sees, and you are out of disarming distance, you will probably be the first person who gets shots. That’s just bad luck, and the way it goes sometimes; even the best warriors are hit from time to time in battle.

These are just a few pointers that may help you in an Active Shooter situation. The best thing you could do is attend one of my Terrorism Survival courses to actually go through some scenarios, but if this is not possible then my videos on YouTube and my book is the next best thing. Share this information with those you care about.

Learn How To Strike A Human Head with the Reality-Based Impact...

Filipino Kali is Alive and Well in Today’s Police and Military...