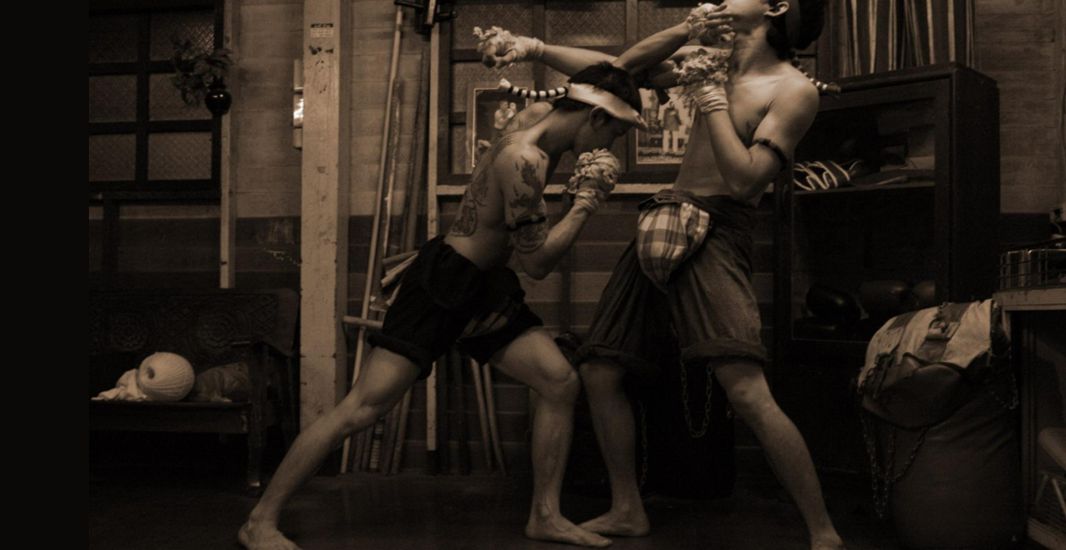 The art of Thai boxing is a self-defense technique that is as old as Thailand itself.  Muay Thai fighting is a branch of knowledge, which has been in existence for as long as there have been Thais.

When Burma attempted to conquer Thailand by force they were eventually defeated when the Burmese army was driven back at the hands of Thai fighters using Thai boxing, spears and elephants.   For more than 2000 years Thai boxing has played a significant role in the survival of Thailand.

Like other fighting arts Muay Thai was born out of conflict.  In 300 B.E. The Thai Mung were invaded and sent fleeing for their lives to the south of Thailand.   The vanquished villagers developed a form of self-defense using their feet, knees elbows and fists as a way to defend themselves.  This evolved into the art we now know as Muay Thai.

As decades turned to centuries Thai boxing became one of the world’s most deadly styles of fighting.   No where was this proven truer than in the Burmese city of Ragoon when the King of Burma decided to pit his top fighter against a captured Thai boxer.

In 1767 Burma had all but conquered Thailand, to celebrate Lord Mangra, King of the Burmese, organized a seven-day celebration to commemorate his good fortune.  He rounded up a group of Thai prisoners, among them was Nai Khanom Tom, a famous fighter from the ancient Thai capitol of Ayutha.  Known as the best Thai fighter in the land the King thought that his demise at the hands of a Burmese boxer would humiliate the Thai captives while establishing Burmese superiority.

Prior to the fight, the Thai fighter began dancing around his opponent.  This was the traditional wai khruu dance that Thai fighters perform to pay respect to their teachers.  The spectacle confused the Burmese fighter and when the signal for the match to begin was given Nai Khanom Tom rushed forward and swiftly overwhelmed his opponent.  In a matter of seconds the fight was over.  The best the Burmese had to offer lay unconscious at the feet of the Muay Thai fighter.  The bout was however not ruled a victory for the Thai fighter.  A referee judged that the knockout was not legal because the Burmese fighter had been distracted by the wai khruu dance.

Nai Khanom Tom was ordered to fight nine additional Burmese boxers.  He agreed to fight them to uphold the honor of Thai boxing.  One by one they fell to a flurry of elbow strikes, knee thrusts, kicks and punches.  His last opponent was a boxing teacher from Ya Kai City.  He was so badly mangled by Nai Khanom Tom’s kicks that no one dared challenge the Thai fighter ever again.

Lord Mangra was so impressed with the Thai’s skill that he beast his breast in admiration and rewarded the fighter with his choice of money or two beautiful wives.  He took the wives, moved back to Thailand where he lived with them until his death.

By defeating the best Burmese fighters of the era in one single day Nai Khanom became part of Thai history and to this day is remembered as the first Thai boxer to established Muay Thai as a superior art in actual combat.  The episode is a part of recorded Burmese history. This engraved message was written in his honor.

“There is no other boxing like that of the Thai.  Fists, knees, feet and elbows are all used.  And the boxer, no matter how small in size can’t be beaten.  All nine of the Burmese Mons were defeated by Thai boxing.  The name of Nai Khanom Tom resounds with fame.  Although he is dead his name lives on.  We who were born in latter days still know him.  He brought honor to our nation and we all admire him.”

Some 20 years later, during the reign of King Rama 1 another Thai fighter found his way into the annuals of Muay Thai history.  Two French boxers came to the city we now know as Bangkok and put forth a challenge to all Thai fighters.  They boasted that there wasn’t a Thai boxer in the land who could defeat them.  When the king learned of the challenge he considered it an insult and wanted to make sure that the cocky foreigners would not tarnish the honor of his country.

The king issued a royal command to find a fighter who would accept the challenge and defeat the two Frenchmen.   From all of those who came forward, one man was chosen.  His name was Muen Phlaan; he was a teacher skilled both in Thai boxing and wrestling.

The prince ordered the construction of a pavilion near the western theater of the Temple of the Emerald Buddha as a site for the contest.  The event had all the hype of a Don King title fight, however the contest itself was brief and one-sided as Muen Phlaan easily whipped the two French fighters forcing them to leave Thailand in shame.

Thai boxers of that period were graceful in both movement and execution of technique.  The following description of Thai boxing and the types of Muay Thai fighters come from an ancient scroll that can be found at the Muay Thai Institute outside of Bangkok.

“Thai boxing is an exchange of blows, a trial of strength using various parts of the body, or even its entire frame as a weapon.  The combatants may bite, kick, punch, grasp, headbutt: all these are considered part of Thai boxing.  It is all fighting with the weapons with which human beings are naturally endowed..some had the grace of the King of Beasts closing in on his prey, and were equally agile in defensive moves; others were great jumpers capable of boosting themselves with a foot on the waistband of an opponents boxing shorts and delivering a stunning kick to the head; still others could box in a crouching position and get so close to their opponents that they could grab them by the whiskers, then get away quickly. This was important, as if such a boxer were not careful, he could get a skull-shattering kick in the head.  If he tried to escape between his opponent’s legs to get behind him, the opponent could swing around and get him with an elbow to the head.  If he was boxing in an upright position, he could strike from the position called “Hanuman offers the ring,” punching upward to the jaw.  Then there were boxers who feigned a fall to trick the opponent into coming close to deliver a coup de grace with his feet. But any boxer who fell for the ruse would become the victim an exclusive secret maneuver that would instantly lay him low.”

In former times, Thai boxers would bind their hands with raw cotton threads loosely woven into a chain-mail type configuration, knotted at the fingertips like a seashell.  The purpose was to give the hand a hard and abrasive surface.  At times it would be dipped in glue and sprinkled with finely ground glass.  This practice was eventually discontinued, however the cotton bindings remained in use until 1929, when they were replaced with padded gloves.

Kicking rubber plants hundreds of times a day strengthened legs and shins.  Today heavy canvas bags have replaced the rubber plants but the training remains as rigorous now as it was centuries ago.

It was during World War 1 that the art if Thai boxing was introduced to the world at large.  Since Thailand didn’t have a large arsenal of guns, the art of Thai boxing was widely studied by soldiers for close quarter fighting.  When the Europeans saw this amazing display of unarmed combat and how effective it was the word began to spread about Thai boxing.

A French sports newspaper published the following excerpt on the art of Thai boxing,

“Thai boxing is astounding but hard to get to see.  The boxers are agile, strong and tough.  This sport is not just a thrilling, strange and extraordinary form of entertainment.  Once again, it makes the French feel that Siam is one of the truly powerful nations of Asia.”

The traditions of Thai boxing and its history continue to thrive in modern-day Thailand in the form of Muay Thai kickboxing.  Muay Thai is the national sport of Thailand and stadiums are filled to capacity for the weekly fights.

There are many gyms throughout Thailand for fighters to train; two of the best known are the Sasiprapa Muay-Thai gym in Bangkok and the Muay Thai Institute in Rangsit.

Each gym has produced many champions, and both places accept foreigners for training.  The difference between the two training facilities is mostly cosmetic.

The Sasiprapa Gym is very basic.  Under the watchful eye of Thakoon Pongsupha and his trainers, fighters work out on a cement floor in a large patio-like environment.  Their ring smells of sweat and has the personality of a well-seasoned fighter who has been in many battles.  Thakoon’s fighters lift paint cans filled with cement to strengthen their arms, and wail away at several heavy bags developing their lightening fast kicks. They shower in a cement square filled with water from a garden hose, sleeping quarters consists of one large room adorned with old mats and blankets and meals of rice and curry are their mainstay.

“We are very happy here,” said one of the fighters.  “This is our home and we are all family.”

“It may not be the Ritz but you can’t find better training anyplace else in the world,” said American Kickboxer Bob Chaney.  “I started training her years ago and come back every chance I get.  This is what it’s all about and when my fighters want to train the old fashion way, this is where I send them.”

On the other side of the coin, the Muay Thai Institute is a modern, state-of-the-art training facility with all of the creature comforts of a nice hotel.  Visitors and live-in fighters have a dormitory that can accommodate up to 200 students.  Each room can house 10 students and is equipped with lockers, a TV and refrigerator.  Their rings are new and they feature a fully equipped fitness room.  The Institutes library is filled with photos depicting the history of Muay Thai along with hundreds of documents about the sport and its origin.

While the two gyms are worlds apart in a cosmetic sense, they both take a no nonsense approach to training.  Muay Thai fighters are devoted to their art and work tirelessly to perfect their skills regardless of where they train.

“We do this to make a living,” said one fighter. “This is our life and our livelihood. If we do not win fights we make no money and if we lose many fights someone else will take our place in the gym.  So we must train hard.”

With the evolution of Muay Thai from a martial art to it’s current status as one of the world’s fastest growing sports it has ushered in a new era that will stand as a testament to the generations of Thai boxers who laid the foundation for what we now know as Muay Thai.