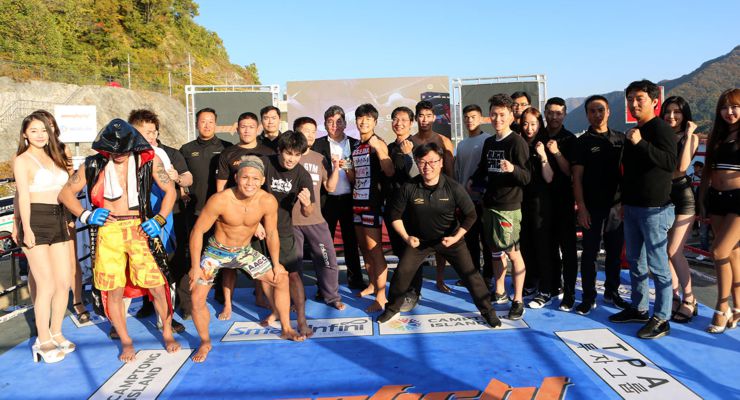 Unless you have been living under a rock for the better part of your life, you don’t need to be told that tensions between South Korea and Japan have never really gone away. Many fight promoters capitalize on that social and political unrest. A few actually make an effort to smooth things over in at least a small way. This has been the case with Scott Seo’s NeoFight. He spent a good part of his early years in the USA. After he returned to his homeland to help his father’s massive Hanminjok Hapkido Association, he began to travel to all parts of the globe. Perhaps those things contributed to a very open mind, both in and out of the martial arts industry. His NeoFight 14 event proved his different way of thinking has paid off.

NeoFight 14 was held on October 20, 2018 at the majestic Camptong Island resort in South Korea. There were seven epic bouts featuring four Japanese fighters who challenge their Korean counterparts.

The event jumped to life with an explosive match between Japanese fighter, Koji Takuchi and Korean, Kim Yong-Hee. Although it was a bit slow at the start as the pair began sizing each other up, it heated up as Takuchi focused on leg kicks as Kim concentrated on a barrage of punches. Near the end the Japanese fighter took the Korean to the ground, to have the position reversed and open himself to being pummeled by Kim. The whole match took place in only 1 minute and 6 seconds!

The second fight was memorable not so much for the action, but for the Japanese fighter actually. Shuhei Higashi was a magnet for everyone’s attention with his mane of blond-hair, and impish grin and a muscular physique. He went toe-to-toe with Korean fighter Kim Min-Woo. The match started with an explosive jump knee kick from the Japanese fighter. Then the two quickly started raining punches on each other. A remarkable event midway through the first round, despite an illegal groin shot(accidental), both fighters grinned at each other and high-fived the other. The crowd was massively impressed. After the Korean focused on punches as the Japanese danced around and focused on striking the outside of the Koreans left thigh. The leg, not surprisingly, began to turn purple from bruising, Km tried to subdue him against the ropes despite a nasty cut across his forehead.

The delay for second round was to ensure Kim’s cut was under control. Remarkably, despite the other’s bravado he showed genuine concern and tried to check on him in his corner.

Round 2 exploded at the start as Kim took his opponent to the canvas… hard! Higashi kicked free. The rest of the round was spent with the Korean taking his adversary to the ground and unsuccessfully dominating him there. It resulted in a draw and a bonus round.

The bonus round was explosive! Kim done at Higashi and drove him back into his corner in order to try to take him to the ground again. Higashi responded with more leg kicks., particularly to the left outer thigh. Slowly, the two warriors showed their waning energies as the dock ticked. Kim clung on to the Japanese, unwilling to give up. At the end, Higashi gave him a large hug resulting in more applause for his outstanding sportsmanship. Higashi won the match in the end.

Round two started with a bang as both fighters dove at each other. Goh quickly took Kyohei to the ground and landed a few blows before the referee broke them up. Then after a short boxing exchange, Kyohei picked Goh up and slammed him to the ground and pinned him. Goh quickly reversed and there-in started a struggle for dominance on the mat. Eventually at the end, Goh remained on top and showered his adversary with on top and showered his adversary with blows resulting in his victory!

The fourth was over before it started it see mad. Kim Min-Hyung faced off against Myoung Jae-Ook. The pair lunged at each other, but Myoung took Kim to the ground and pummeled him into submission, in all of 20 seconds!

The fifth bout pit Toshihiro Shimizu against Kwon Won-Il. Again, surprisingly, the Japanese fighter had overwhelming Korean support as his nickname “Kamen Rider” which is a famous Japanese superhero show dating back to the 1971 which also played in South Korea as long. From the moment he stepped into the ring with a Kamen Rider belt and the theme played, the older spectators gave him a roaring welcome. The match began with the pair warily exchanging jabs. Shimizu tried three takedowns without success. Kwon attempted a flying knee which also missed. The pair continued to switch back and forth from jabs to attempted takedowns. At the end of the round, Shimizu tried a hand strike, but slipped on a sweaty part of the mat. Kwon quickly took advantage and launched himself on top of his Japanese opponent. Then the bell rang!

Round 2 started with both circling each other warily. Shimizu then tried another take down, but Kwon retreated. The two struggled against the ropes shortly after. Simizu then success fully took Kwon to the mat, but Kwon slid across the mat to reach the ropes. The Japanese fighter got hold of Kwon again and wrapped his arms and legs around him from behind. He then tried to pummel Kwon. They were separated. They went back to boxing (Kwon’s strong point) and Shimizu tossed Kwon to the mat. This continued until the very end of the match with both fighters spent, physically and spiritually Kwon won by decision, but both warriors hugged each other after winning each other’s respect.

The sixth bout featured Park Sang-Hyun and Oh Su-Hwan. It started with strong punches and a few well-placed kicks. Park tried to take Oh to the ground, but Oh reversed the position and dominated Park. Park fought to get back on his feet and the pair resumed exchanges of low kicks, knees and punches. Both played to the ground dancing across the canvas. They were both very well-matched at all ranges. Round One ended with Park striking Oh three times in the face.

Round Two started with Oh pressuring Park with stronger punches and more punishing leg kicks than the other. Park tried to break the onslaught with a spinning back fist to Oh’s face and a knee kick. Oh, however took the kick as an opportunity to throw him and tried to pin him to the mat.

Not to be outdone, Park fought as he got to his feet. However, the punishment began to weaken Park and his guard dropped. Immediately, Oh grabbed him and threw him out of the ring. After being brought back in, the two resumed battling with Park punching and Oh responding with knee to the face. Park then attempted another knee with Oh tossing him to the mat again. Park quickly regained his footing only to have Oh again pummel his face with brutal knee kicks. At the end, Oh threw him again and applied a rear naked choke, ending the match.

The 7th and final bout was between Amimoto Norihisa and Ohk Rae-Yoon. The bout starts with Norihisa striking Ohk just below the armpit with a punishing roundhouse kick. That started a rapid exchange of blows with the Japanese fighter focusing primarily on kicks, while the Korean focused more on his hands. Later on, in the round, the Korean executed a take down. When he attempted to launch himself on top, the Japanese fighter kicked him in the groin while protecting himself on his back. Despite the low blow, he fought on. The Korean continued to exhibit a wide array of throw and takedowns throughout the round, Near the end of the round the Korean dominates the Japanese to the point he is on his back and pummeling him. In the last few seconds the visiting fighter reverses the position and punches the Korean three times.

Round Two got off with a bang as both exploded with a barrage of punches. This changed when Ohk threw his opponent to the canvas and followed up with more punches. The two were separated and resumed seconds after. Ohk executed an amazing flying knee kick, which although it missed, drove the Japanese fighter into a corner. Ohk threw him five more times during the match wearing his counterpart down bit by bit. Near the end, the two struggled on the mat, against the bottom rope and both fell out of the ring at the end of it all, however Ohk took the match!

At the end of the match it is worth mentioning ALL of the fighters were brought together for photo shoots with the fans including the Japanese fighters making them feel very welcome.

It’s events such as this that slowly breakdown the cultural divide.