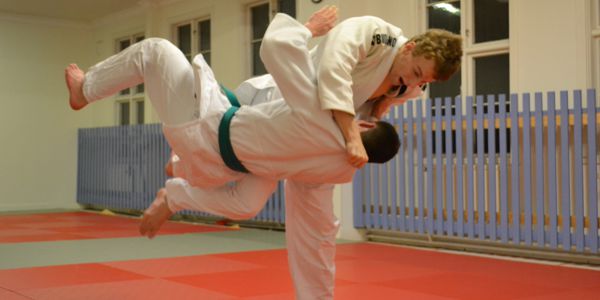 A basic first principle throw in Judo is “O Soto Gari”, a major outer reaping of the opponents outside leg. This is usually done in Judo with a foot sweep technique, along with a chest bump and a twisting of the opponent’s upper body in the desired direction necessary to compliment the throw. From the age of seventeen, on, I had always executed this throw in this approximate same way.

When I began the study of AiKi Jitsu with Grand Master Donald Miskel some years ago, as we were going through some wazas one day, he executed the Jiu Jitsu variant of O Soto Gari on me in a way which caught me completely off guard—and which dropped me off the “fighting surface” we used in his backyard (a slab of concrete!) and into the bordering gravel in an unceremonious heap. I fell so fast that, expecting to land on the concrete, I executed my ukemi too soon, and since I was falling OFF the concrete onto the ground, struck the ground like a ton of bricks. It was, well, yes, embarrassing, and it was also instructive.

Even as I was falling, I realized what had just happened and HOW it had happened, and neither the fall, or the embarrassing flub of the ukemi, or anything else was much in my mind. “Wow!!”, I remember thinking, “THAT really works!!” Sensei Miskel, meanwhile, greatly amused, just stood there kinda’ laughing at my discomfiture. He was a little concerned I might be hurt, but I got up excitedly. exclaiming, “That was just O Soto Gari, wasn’t it? With a slightly different twist on its execution from what I am used to as a Judoka?” He confirmed this for me and I asked him to show it to me again. Maybe, this time, a little closer to the center of our concrete slab.

What he had done was, as he broke my balance backwards, and placed his right leg around and to the outside of mine, instead of then sweeping his own leg backwards and into mine, and then lifting mine up as he completed the sweep, itself, he had simply planted his right foot on the ground behind mine and then flexed his leg, driving his calf into mine, just below my own right knee. This had caused a reflexive reaction on my part which resulted in me lifting my own foot off the ground, allowing him to quite easily and efficiently complete the throw and sweep me to the ground.

It was among my first real lessons in how different martial arts approach the same problem from different perspectives and therefore come up with different ways to accomplish very similar things. All of the arts, I think, have some advantages over others, in direct comparison. Depending on the philosophy one employs in his studies of the arts and on the immediate problem at hand. But, in this case, a Life-long Judoka, I had “discovered” (or rather had painfully introduced to me!!!) a “new” way to do the same old thing I had always done and a “new” way I found to be more efficient and even more artistically pleasing to me than my former execution of the same basic technique.

Why was this a good thing? Because it opened me up to dicovering a new world of martial arts. In the years since, Sensei Miskel has taught me elements of Kenpo, Chi Na, Boxing, Chinese Fast Wrestling, Krav Maga, Bagua and much more besides. With concentrations in Kenpo and Chin Na, AiKi Jitsu and Jiu Jitsu. And during this time, and through this rather eclectic process, I have come to learn many different ways to solve a problem, and to learn, too, that almost every martial art has something of its own of special worth and value to offer. Different arts emphasize different things, but each one, generally speaking, has something of its own, which is UNIQUELY its own of incomparable value to offer.

That is why I have come to believe in a greater spirit of unity in the arts, rather than in the old-style, “my-art-is-better-than-your-art” mindset so prevalent in the past. And it is why I have also come to believe that whether one has learned his martial arts in a Dojo of “Harvard” class, say in the Kodakan Institute, or in a Dojo of a more “community college” type reputation, that the IMPORTANT thing is to LEARN the martial arts. My first Sensei in Judo, Don Schneider, taught himself Judo from the “Illustrated Kodokan” and then tested for his Shodan when he thought himself ready. And earned the Shodan on his first try, before an AAU and Shufu Judo Yudanshakai sanctioned panel. He later won the US Nationals and made the US Olympic Team. I am more interested in what a martial artist knows than where he learned it. And in the many different martial arts there are than in getting all wrapped up into which one is “best”, or into which school is “best”, and so forth.

That does not mean I do not wish that I had chucked everything, many years ago, and gone to Japan and applied to study at the Kodokan. I simply have come to realize that, having not done that, does not mean that I cannot still become a credible, or even an excellent martial artist. And I hope, and believe, that at this time, I have at least achieved the latter. And if I can do this, I believe that most anyone can, with diligence and effort and a willingness to pay the price necessary along the way.