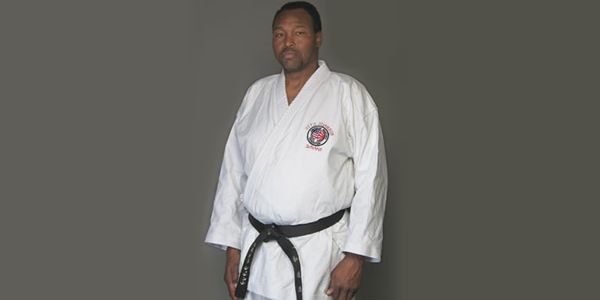 Shihan Otto Johnson’s life was tragically taken in a hit and run accident  in San Bernardino, CA on November 2, 2004. He was laid to rest on November 20, 2004 at the Desert Mortuary in Salt Lake City, Utah. A memorial service and celebration of life was held at the Shuyokan Dojo on December 11, 2004 to celebrate the life of Shihan Johnson. Olohe Solomon Kaihewalu of Hawaiian LUA did the honors of leading the prayer vigil for the Memorial Service.

Hanshi Otto Johnson began his study of Wado-Ryu Karate-Do 30 years ago under the tutelage of Hanshi Toshio Osako Hanshi. Osako is a three-time All Japan Karate Champion and coach at “the renowned and feared”

Nichi-Dai University of Tokyo in Japan. Hanshi Johnson is a graduate of the Karate Instructors Training Program at Nihon University, under Toshio Osaka Hanshi. Osaka instructed Johnson personally for the World Wado-Ryu Karate Championships held in the Budokan in Tokyo, Japan and International Karate Championships held in Osaka, Japan in 1979. Johnson won both gold medals. He is a former World International Karate Champion and the first African-American to ever accomplish this feat.

He has served as a coach to many local, regional, national, and international champions. He is a 5th level World Karate Federation (WKF) licensed referee and is qualified in law enforcement martial arts. He is in constant demand for his seminars and personal lessons.

Shihan Johnson was issued his 7th Dan certificate on April 25th, 1998 which was signed by the late Masaru Shintani under the authority of the Wado Kai of Shintani Karate Federation of North America.