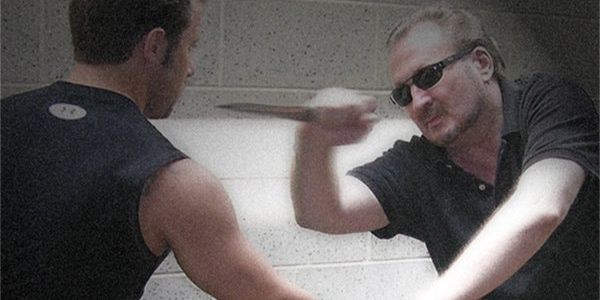 It is imperative that we reexamine modern knife instruction for civilians and make sure teaching provides practical unarmed skills against a live blade.

Many instructors teaching counter-knife defenses to the general public don’t understand how knife attacks really occur. Many of them still prioritize stick work, erroneously believing that developing stick skills will automatically transfer to the knife – unarmed? Well, since the vast majority of edged weapon attacks are sudden and without warning, victims have their hands full just trying to avoid being stabbed, let alone have the time to pull out a weapon. In most cases the victim WILL BE stabbed and perhaps not know it until afterwards. How is stick work relevant here?

There are some Filipino styles that do emphasize knife work, but mainly in an offensive capacity. They seem to delude themselves into believing that they will always be ready for any event; the reality is — don’t bad things always happen when you’re the least prepared for them? And for the most part, these styles don’t even teach any practical unarmed skills against a live blade.

I enjoy practicing knife-fighting, but not to the exclusion of defensive knife work. I also realize that the chances for me, with knife-in-hand to go up against an attacker WITH a knife are astronomically minimal in this world. The chance that I may have a knife on me at all times is also not likely; and the chance that I can draw it in time against a determined attacker is not probable.

So if the odds are stacked so heavily against you in the first place, why should you learn knife-defenses at all? For “knife awareness.” If you practice a reality-based program that includes a counter-knife component you may be able to survive a knife attack, and that’s the point isn’t it? You probably won’t wipe the floor with your attacker, but if you could survive the assault, wouldn’t that be great!

Two questions come to mind
#1. What types of attacks will the average citizen (usually a business person) in a major urban environment be vulnerable to; and #2. What do I have to look for, or even better, avoid, in terms of defensive-knife instruction.

In terms of types of attacks, I usually look at newspapers to see what’s happening in my area, but more importantly I also ask LE officers I know for their general take on the matter. The common consensus seems to be that the most likely edged-weapon assaults usually come via domestic disputes and/or street altercations. Many domestic disputes occur in the kitchen where knives and tools are readily available. In street disputes; individuals who are not at all reluctant to get into street fights are most often the type of individual who will carry some sort of weapon. Bump into him on the wrong day and you could be in for it.

Other types of knife attacks are most commonly robberies and random assaults by deranged individuals. Victims of random assaults are especially always shocked; they have a hard time believing they were targeted in the first place – it doesn’t make sense!

The case for proper instruction
I used to be more critical of knife instructors in general; after all, poor instruction could potentially cost a student his or her life. But then I realized most [knife-defense instructors] didn’t know any better and no matter what I said, it wouldn’t change a thing. Nowadays I concentrate on providing useful and practical information to anyone, whether they practice kung-fu, kendo, combatives, Israeli styles or Filipino martial arts; anyone wishing to improve the odds of their survival from a knife attack are welcome.

Running, the greatest technique
No matter how strong or skilled you are, being close to a sharp piece of steel moving rapidly in your direction is not a good place to be. There is a good chance you will be cut and severely injured. The wisest course of action is to immediately turn and run away if the opportunity presents itself. Many martial artists claim that if WR Mannyou run, the attacker may chase you and still stab or cut you! But then again, most martial artists have had no real fight experience. This philosophy comes from the martial arts mentality of “stay and fight” and has nothing to do with safety concerns.

SO WHAT if he chases you! Your attacker will not be able to inflict the same degree of damage on you if you are moving instead of just standing in front of him; with your throat, heart, stomach and liver within easy reach! If you run, you can always find objects to place between you and your attacker, you may even get the attention of police, or the attacker may think you’re not worth getting arrested for and leave. But your chances of surviving are far greater trying to escape.

Immobilize the delivery system
If you can’t run, if you’re too close, or the attack is too sudden, what can you do? The best course of action in this case is to immobilize the attacking arm; instinctively and anyway you can. Not at the wrist or hand, but at the high bicep and junction of the elbow. You’re better able to control your attacker in this manner. Attacks such as descending, ascending or straight thrusts or slashes are handled slightly differently but the principle remains the same, immobilize the upper arm. At this point, if possible, bump or push the attacker, turn and run. If you feel this is not sufficient then you may have to bump/smash the attacker against a wall or trip him so he falls (all the while maintaining a firm grip on his arm). Note: after initially gripping the arm it’s important to bring his arm close to your body (either inside or outside) this will give you the power to fully neutralize his delivery system. It’s also vital to grab his shoulder and the area above his elbow for a stronger grip.

Use a shield
If you carry a large bag, case or any other object, and you’re too close to run away, use that bag or case as a shield between you and the attacker. Smash into him, push him off balance and run.

Don’t block or attack, just get out of there
Don’t try to block the knife or pretend that the attacker doesn’t have a one. Some combatives practitioners use a tactic called “attack-the-attacker,” and in theory it can work in certain situations but it’s dangerous unless you’ve practiced it a great deal and even if you succeed to jab your opponent’s eyes, the next step should either be to run away or to immobilize his arm. Blocking a knife-thrust with a limb and continuing on with an offensive technique is just ludicrous, if your instructor advocates this type of action, run away from him fast

Don’t forget to yell!
Don’t forget to yell or scream for help if you’re being attacked. In most large American cities, I’ve heard it is more beneficial to yell “Fire” than “Help.” It just gets more attention. Quite often people in large cities won’t help you either because they’re scared, don’t want to get involved or think you are having a domestic dispute.

Note: The Runaway
There is something distressing about the way martial arts trained students run away. Even if they happen to successfully smash or push their opponents up against a wall or drop him to the floor, there is this silly ingrained habit of facing the opponent and getting into a rigid guard position. That may work in a tournament or the confines of a school but don’t waste your precious time, or life; ignore this misguided movement and turn your back to your opponent and get out of there as fast as you can. An average person with no training can run about 20 feet in a second, with some help from your adrenaline; you may cut that time down considerably.

All of these concepts mentioned above will give you a better chance of surviving an edged weapons attack. I personally know people who have used these methods and survived to talk about it. Unfortunately most knife instruction doesn’t include these concepts — that’s why I do.

To contact WR Mann and Defense Science visit his listing on the Martial Arts Schools and Businesses Directory by clicking on the image on the left.