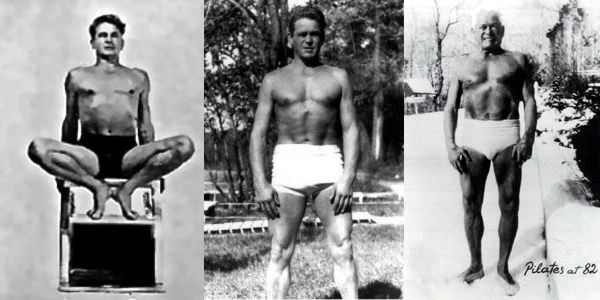 Mind, body, spirit, focus, concentration, diaphragmatic breathing, precision, and fluidity these are some of the terms commonly used in the martial arts. But did you know that these are a part of Pilate’s basics and its common terminology? Today when we think of Joseph PilatesPilates we think of Daisy Fuentes, Hollywood stars and dancers. If you walk into most Pilates classes you’ll notice that they are predominately for women. But Joseph Pilates was known as a man’s man. He even lost an eye to a boxing injury. Pilates training is a functional workout great for athletes and martial artist.

Joseph Pilates studied martial arts and boxing at the turn of the last century and later taught self defense. Joseph was a pioneer in the teaching of self defense, way before America embraced the martial arts. In the 1930’s Joe and his brother made a film on how to defend against a knife attack. There are also photos of Joe demonstrating the art of head wrestling. Pilates even developed some apparatuses to help boxers in their training. Nat Fleisher the president and editor of “The Ring” magazine, the world’s most recognized boxing magazine, sent him a note in appreciation to Joe for his influence on the boxing world. In the note he acknowledged Pilates as the greatest teacher of physical education and corrective exercise. Whether your art is Boxing, Kung Fu, Karate, Judo, Wrestling, Tae Kwon Do, or a mixed martial art, Pilates is for you!

The mind, body, spirit connection is evident when performing Pilates. Joseph Pilates believed that the mind controlled the body. You must have total concentration and also have a mind-body connection to perform Pilate’s exercises correctly. In the martial arts every part of the body could be used as a weapon. Pilates will stabilize your weapons, each and every part of them. Being in a physically demanding contact sport/art, many martial artists careers end or are set back by reoccurring pain or injuries to hips, shoulders, knees, wrist, elbows, feet, and hands. Increasing amounts of maturing martial artists are going through hip replacement surgery. Pilates can help reduce the risk of injury and to help you recuperate from current pain and injury. Some martial artist are still doing and teaching ballistic stretching which can damage your joints and ligaments. Pilates training can re-educate and rehabilitate the injured aging martial artist.

Following the Pilates principles you will attain greater speed, power, strong core, range of motion, and form in your martial arts. Your posture will improve and as a bonus your waistline will decrease. Pilates is the key to the mind-body link that is so important to martial arts training. These remarkable exercises will improve dramatically your static & dynamic balance. Static balance gives you the ability to control your body’s center of gravity. A good example is balancing on one leg as in a Kung Fu crane stance or doing a Capoeira hand stance. An excellent example of dynamic balance is agility movements such as in Wushu Kung Fu and Tae Kwon Do’s aerial kicks. As you can see the Pilates martial arts connection can surely improve your martial arts and your health.

2 Stretch Yourself: Difficulties Doing a Side Split

The Link Between Martial Arts and Fitness

Thomas Kurz - June 1, 2013
We use cookies to ensure that we give you the best experience on our website. If you continue to use this site we will assume that you are happy with it.OkRead more