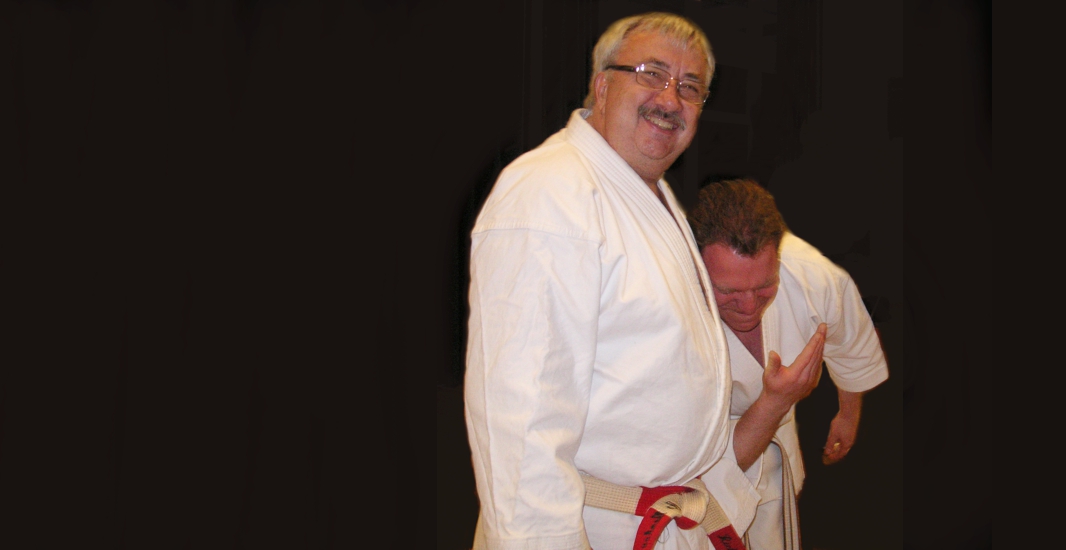 In Judo, shime-waza is a general term for a grappling hold that critically reduces or prevents either air or blood from passing through the neck of an opponent.

A chokehold restraining move in which one person seizes another around the neck in a tight grip, typically from behind.

The sport of Judo is divided into three main categories of techniques:

Each of these classifications can then be subdivided into specialized techniques.

Atemi-waza, the striking techniques, were added to the syllabus of Judo by the founder Jigoro Kano after “learning them from Gichin Funakoshi, the father of modern Karate.” Cocoran & Farkas (1983) pp 212-213 The atemi waza used in Judo is not as highly developed or stylized as the technique of Tae Kwon Do or Karate, but is none the less very effective for self-defence when combined with the other techniques of Judo.

This sub-category of grappling techniques deserves a great deal of attention. Choke holds are an efficient way to restrain your opponent, and could offer a useful addition to a martial artist’s repertoire of self-defense techniques. This class of techniques is so effective that you can render your opponent unconscious in approximately 10 seconds, if the choke is applied properly. Shime-waza, typically, will apply pressure to either the side of the neck or to the front of the throat. Those chokes which apply pressure to the side of the neck are particularly effective in rendering your opponent unconscious. Techniques such as Nami-Juji-Jime or natural cross strangle and Gyaku-Juji-Jime or reverse cross strangle are examples techniques which apply pressure to the side of the neck. Pressure should be applied at the bifurcation of the carotid artery. By applying pressure on the lateral parts of the neck there can be a complete stoppage of blood flow. It is possible to compress the vertebral artery between the subclavian artery and the foramina transversaria to affect a quick loss of defence capacity. A choke that can apply pressure to the throat and cause an individual to lose consciousness from lack of oxygen is the naked choke or Hadaka-jime. A similar choke is the sliding collar choke Okuri Eri-jime that makes use of the lapel of your opponent to increase the amount of pressure you can apply to the choke.

There is, however, another explanation for the effectiveness of such techniques. At this point there are arterial baroreceptors which, like other pressure receptors, respond to changes in length of the surrounding tissue. Baroreceptors are spray type nerve endings which are located within the walls of the arteries. Baroreceptors are found in the major arteries in the body and neck. Large concentrations of these receptors are found in the Carotid sinus, and the Aortic arch. By stimulating baroreceptors located in the Carotid sinus several responses are triggered. There is a vasodilatation of the peripheral circulatory system, a reduction of heart rate which is coupled with a decrease in the strength of heart contractions. The net effect is a reduction of arterial pressure causing the person to lose consciousness.

Popular knowledge of the mechanism of Judo chokes indicate the cause of unconsciousness is due to reduced blood flow and oxygen to the brain. When pressure is released the blood flow should resume to the brain and consciousness return to the individual. It seems more likely, however, unconsciousness results from the baroreceptors reflex. Safety is a major concern of all instructors when practicing or teaching the martial arts. Shime-waza appear to be quite safe in supervised teaching situations. Phil Porter, President of the United States Judo Association, was not aware of any death caused by Shime-waza in a Judo class since it was founded in 1882 by Jigoro Kano. However, when these chokes are used in self-defence or arrest situations by individuals who have received a moderate amount of training, chokes can prove to be deadly. Dr. E. Karl Koiwai reviewed fourteen deaths allegedly caused when police officers used Shime-waza in the line of duty. In most of the cases cited, the suspects were under the influence of drugs or alcohol and had a higher tolerance for pain, which made them harder to restrain. In a supervised training session it is possible to teach the students to apply Shime-wasa in a safe and controlled manner. The students will be able to recognize the effects of unconsciousness and will be able to ‘tap out’ before they pass out. Even if a student is ‘choked out’ Judo has specific techniques of revival known as Katsu, which are taught to black belts. These techniques have been used successfully by Judo instructors since 1882 to revive students who have passed out due to Shime-waza.

O Goshi, for Sport or Street

Shime Waza – The Techniques of Constriction