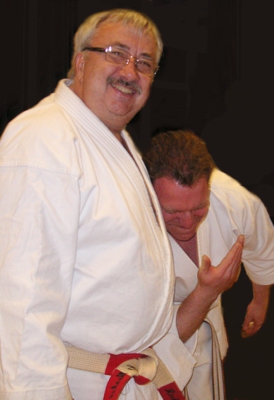 From the beginning of his training in the martial arts Professor Rick Clark has been exposed to the concept of cross training. In the early days most of the martial arts to be found in the U.S. was Judo. Karate, Tae Kwon Do, and Aikido were practiced in the U.S. but tended to be in the larger cities or perhaps in military bases. At that time martial arts schools were not as numerous as they are today. So when a visitor would come to the dojo they would be welcomed and asked to participate in the class, and even teach some of their favorite techniques. They would even offer what they could in a short period of time if they practices a different martial art.

This cross fertilization of martial arts offered the genesis of the current system taught by Prof. Rick Clark. Over the years Prof. Clark has had the opportunity to train with a number of instructors who have felt he had the skill and understanding to be ranked in their system. Because Prof. Rick Clark has trained with a number of different instructors and their styles he has been awarded various ranks. In the past this has led to some confusion with his student because they would question the origin of a particular technique. The late Grand Master Remy Presas (founder of Modern Arnis) offered the advice to Prof. Clark that he should form his own association and name the system of techniques he taught. While this was sound advice Prof. Clark was reluctant to venture out and name a style of martial arts that he was teaching. However, it became increasingly difficult to separate the individual arts from the blended style he was teaching. After further suggestion by Grand Master Remy Presas and from his students Prof. Rick Clark adopted the name Ao Denkou Jitsu for the style he was teaching and Ao Denkou Kai for the organization.

Ao Denkou roughly translates as “blue lightning”, the lighting is for the “zing” of electricity you feel when a pressure point is struck or manipulated. “Ao” or blue is in respect to Chung Do Kwan (Blue Wave) from which Prof. Rick Clark studied from 1966 under Chung Nak Young.

His teachings and methods are sought after worldwide and he regularly holds seminars on Vital Points, Grappling and applications hidden in the traditional forms, for martial artists of many different systems throughout the USA, Canada, Australia, New Zealand, Ireland, Scotland, England, Wales, Norway and Sweden.

His dedication to the martial arts has earned him the commission of Kentucky Colonel by the former governor of Kentucky, the Hon. Wallace G Wilkonson. In addition, Professor Clark has been awarded Tae Kwon Do Instructor of the Year and the Outstanding Achievement Award from the Eastern USA Martial Arts Association.

On the literary scene, Professor Clark has published in Australia, UK, New Zealand, Sweden and the United States. He wrote a regular column in the International Magazine Bugeisha. He is the author of “Martial Arts for the University: A Textbook for Basic Judo, Ju Jitsu, Karate, Tae Kwon Do, Modern Arnis and Vital Points”. He is also the author of Pressure-Point Fighting: A guide to the secret heart of Asian Martial Arts.

Professor Clark’s Ao Denko Jutsu is based on the use of Vital Points to enhance the striking and grappling techniques of any given system or style to achieve maximum effect. Many of his techniques are developed through analysis of traditional forms and the truly effective techniques hidden within them.

Through these seminars, Martial Artists the world over have learned how to increase the effectiveness of their techniques and gain a better understanding of the Traditional forms they practice from this world-class instructor.

To contact Rick Clark and Ao Denkou Kai International visit their listing on the Martial Arts Schools and Businesses Directory by clicking on the image on the left.