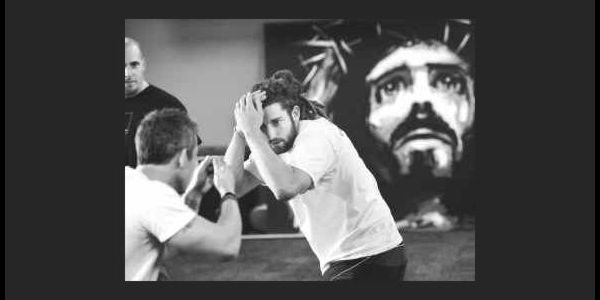 Coming soon to a church near you: your friendly youth pastor starring as Batman just like in The Dark Knight.

Some local ministers are learning to crouch, shove and hit, not to be superhero wannabes, but to protect their flocks in a violent world.

Jeff McKissack is spreading the Batman gospel to youth pastors in Dallas and across the country. He hopes to convert them into followers of the Keysi Fighting Method, the street fighting style used in recent cinematic blockbusters.

McKissack figures that pastors who know how to defend themselves against thugs can help protect the children they lead at church or on field trips to amusement parks or on mission travels.

On Friday, McKissack shared the technique with a small group of youth pastors in the Highland Park United Methodist Church basement.

Facing a painting of Jesus, and with techno music pounding, the youth pastors with padding pounded into each other.

They crossed their hands above their heads to block punches. They pivoted to avoid getting pummeled. They shoved each other around.

Those who attended Friday said they want to be prepared in case the unthinkable happens.

“People do crazy things, and we live in a crazy world,” said Galen Davis, a junior high youth pastor at Calvary Church in Irving. “I don’t think there’s anything wrong with learning to protect yourself.”

But don’t expect the pastors to be cruisin’ for bruisin’. Proponents stress that Keysi (pronounced kay-see) is a defensive strategy used only when someone else attacks.

“We’re not teaching people to find a fight,” McKissack said. “We’re teaching them what to do when the fight finds them.”

“It’s nice to know I have this skill set in my repertoire if needed,” he said.

Keysi also is a way to connect with kids. Children at church call Lohoefer Batman and ask him to show off his moves.

“All you have to do is say Batman and everyone’s head pops up,” Lohoefer said.

Davis plans to use his skills when reaching out to children who don’t attend his church.

“If that gets kids into the church, they see that, ‘Wow, church can be fun,’ ” he said. “This isn’t just a religious thing. These youth pastors can be really fun guys, and these guys aren’t dorks with their huge Bibles.”

Robert Cirtin, a Missouri-based church safety consultant, said he worries that Keysi might not be simple enough for people to remember in an emergency. He suggests that pastors consider taking more traditional self-defense classes. But he added that Keysi could be useful.

“Doing this is better than doing nothing,” Cirtin said. “It does get you to think in terms of your surroundings.”

Many churches could do much more to protect their worshipers, said Cirtin, a former pastor and police officer. Churches are vulnerable because they’re designed to be open to the public, he said.

“Churches are beginning to wake up a little bit,” Cirtin said. “Most churches are in denial.”

Once unthinkable, violence is seeping into churches. Deadly shootings took place in New Jersey in November and in Tennessee in July.

At Fort Worth’s Wedgwood Baptist Church in 1999, a gunman killed seven and injured seven before killing himself in a 10-minute shooting spree.

In 2007, two gun-wielding robbers tied up security guards at First Baptist Church in downtown Dallas and stole thousands of dollars in church property.

Back in the Highland Park church basement, Phil Dieke, the church’s senior high youth director, was sweating. He finds Keysi useful and he doesn’t think it conflicts with the Bible.

“As Christians, we’re not meant to be stomped on,” he said.

McKissack plans to promote Keysi at youth pastor conferences nationwide. He’s encouraging pastors to sign up for an extensive May training program that costs up to $3,000.

Keysi was born in the 1950s, when Spanish gypsies used it in street fighting. Now it’s on the big screen because, movie directors say, Keysi makes fighting look more real.

McKissack, who has taught crime prevention to tens of thousands of children and adults across the country, became a Keysi fan when he first saw it, in Batman Begins.

McKissack said he was impressed by Keysi’s practicality there aren’t high-level kicks or acrobatics.

“It’s tapping into that primal instinct that is there for our survival,” he said.

You Can Make A Difference for The Perry Family Winners