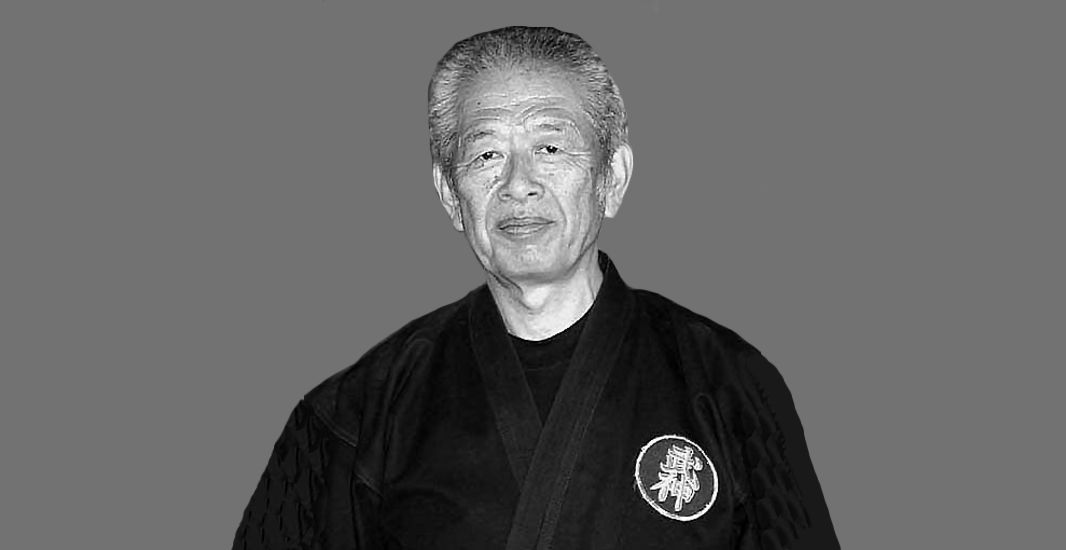 Masaaki Hatsumi was born as Yoshiaki Hatsumi in the city of Noda, in the region of Chiba, on the December 2, 1931. Subsequently his name was changed to Masaaki, which is an unusual name in Japan.

At the age of seven Masaaki Hatsumi received from his father the first wooden sword (bokken) and thus his first contact with the martial arts. Martial arts soon became his passion and he trained on all those that he possible could: Judo, karate, kendo, Aikido, karate okinawense, jukendo.

Meantime at school he practiced gymnastics and was also the captain of the football team. He used football to strengthen the leg techniques in the martial arts that he was also practicing.

During his adolescent years he trained boxing, continued to play football, was a member of the judo and drama club and carried on with his studies.

At the age of twenty, in 1951, during his medical studies, he obtained his 4th Dan in judo. In those days this was something very rare (for a young man to achieve such a high degree) which proved his dedication and perseverance. Soon after he was invited to give judo classes at an American army base (Yokota Army Base). During the time he spent with the Americans he understood that the ability that they possessed coupled with their large frame in comparison to the Japanese, meant that given the same period of training the Americans would accomplish higher results than the Japanese who would undoubtedly require longer periods of training in order to achieve similar levels. This fact actually made master Masaaki Hatsumi question himself regards his training method, whereby the stronger individual beating a weaker opponent has no merit or praise, the real praise would surely come from the reverse. Sensei Hatsumi recounts as follows:

“I have always loved “Budo”, since I was a child in fact. I was a spectator to many “dojos” in order to learn how to become stronger. When I was twenty years of age I taught judo at an American base. One day in a small combat studio a soldier applied extreme force to one of my arms, in a way similar to “onikudaki”. Although I made it look as if it was nothing I knew that he had won. Since that occasion I started to doubt some of what I had learned”

Master Hatsumi continued to look for a martial art in which a weaker person could have an opportunity when facing a stronger opponent. Great part of the decade of the years fifty were spent looking for a Master that could teach him “budo”.

This took him to practice “Kobudo” with Master Ueno Takashi, with whom for three years he studied Kobujutsu juhappan. Master Takashi instructed him in Asayama Icheden Ryu, Shinto Tenshi Ryu, Bokuden Ryu, Kukishinden Ryu, Takagi YoshginRyu and Takagi Gyokushin Ryu. After three years with him Takashi allowed master Hatsumi sensei to give classes to his group of students.

“I went to see the master that everyone spoke to me about. He was seventy years old and I was twenty-six and full of confidence. I entered with care and with a certain anxiety, but he soon told me to relax. During the following years I trained with him every weekend. The anguish that I experienced provoked by his ability was certainly different from any previous one. I had only experimented some cold sensations, this was something much warmer. It was like an internal explosion- I do not know exactly how to explain- it was as if all my blood had been extracted and someone was attempting to kill me afterwards. It was a combination of multiple sensations that could not pinpoint its source. I knew that this was what I was looking for. I asked him to be his student, this was in 1957 and at that time he was not taking students. However, from that moment until the time he expired he taught no one but me. Some people received manuals and opened schools with similar names, but I was the only fortunate one to have learned personally with him. I was chosen as his successor, so to speak. At that time I was still in Noda and had a practice to mend broken bones. I would leave home at the weekends to train with my master and would return home Sunday evenings. This went on for fifteen years until master Takamatsu died. With master Takamatsu I learned a lot but above all as he used to say ” If you do not want to die, work to survive, it is not a sport in which you loose or win, it is a question of life or death. You have to survive this is Budo. This was particularly true with the Ninja, those that were spies, without learning to survive they could not complete their missions”

When Master Masaaki Hatsumi began to train with Sensei Takamatsu he ceased with Takashi. The martial arts that master Hatsumi inherited do not place any strong emphases in the genealogical importance, because this is not the type of art that could upraise its origins. It is understood that these martial arts come about gradually deriving from cultural interchanges that took place between several different groups of people. The origin of these arts can be retraced to the seventh century, back to the religious orders of monks from the continent, (China) who introduced Kung fu and indeed “Shugendo” and also isotheral Buddhism. The religious and warrior principles and experiences of that particular era began to form the different groups which took up residence deep in the mountains away from the populous in order to further develop their combined skills, which later became schools of different martial arts.