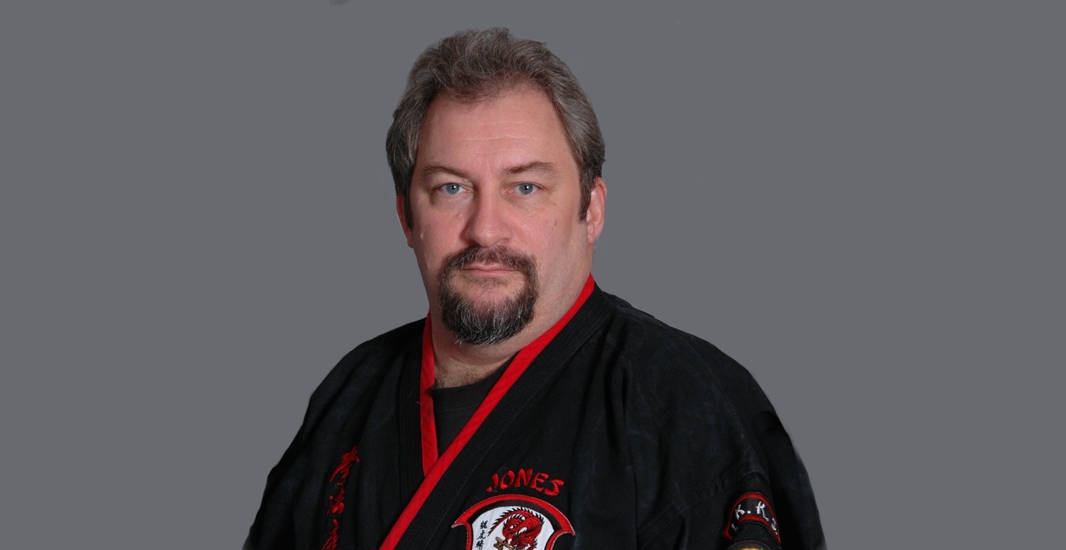 Sigung Robert Jones has over 36 years of martial arts experience and holds Black Belt certifications in three arts. Professor Jones began his study of the martial arts in 1971. He studied the art of Jung Shin Do and was first promoted to Black Belt in that discipline in 1976. He remains a personal disciple of the Grandmaster of that art Do Joo Nim Douglas Vess. Since December of 2003, He has held a 7th Dan in Jung Shin Do awarded by Grandmaster Vess. He also studied Hwa Rang Do under the personal tutelage of Supreme Grand Master Joo Bang Lee. In 1982, Professor Jones met Senior Grandmaster Edmund K. Parker of American Kenpo and began to devote his life to the further study of that discipline. He was personally promoted to 1st and 2nd Degree Black Belt in American Kenpo by the Senior Grandmaster.

Sigung Robert Jones holds a Ph.D. in Political Science with a cognate area in Education earned through Northern Arizona University. Dr. Jones is a professional educator who is on the faculty of three institutions of higher Education in the Las Vegas valley. He serves as adjunct faculty for the University of Nevada Las Vegas, Regis University, and the Community College of Southern Nevada. He has authored and co-authored several articles on American Kenpo and education. One article, “Psychological Levels of Learning and their Implications for American Kenpo,” was published as his thesis for 2nd Degree Black Belt. Among Sigung Jones many interests are the healing arts. He is certified as a Diplomate in Oriental Medicine through the Tae Geuk Healing Arts Institute, and runs a branch campus of that Institute.

Sigung Robert Jones is the founder of the I.K.K.S. or the International Kenpo Karate Society which is the governing body for Wu Shen Pai Kenpo internationally. The I.K.K.S. has affiliates throughout the world. Professor Jones has developed a series of written manuals and video training aids designed to lead the members of his Association toward ever higher levels of proficiency in Kenpo. He is also the author of a series of books on American Wu Shen Pai Kenpo entitled Advanced Kenpo Karate: the Wu Shen Pai Method, Volume I: The Master Keys. This is part of a three volume set. The remaining books in this set are entitled: Advanced Kenpo Karate: Contact Manipulation and Control Maintenance and Advanced Kenpo Karate: Pressure Points and Cavity Presses. He has been a columnist for USA Martial Arts Magazine, Las Vegas Parents and Kidz Magazine, and for Southern Nevada Family Magazine.

It is however, his teaching activities which truly give Professor Robert Jones his greatest satisfaction. He counts among his students 2 four time Internationals winners, 6 World Champions, and over 20 State Champions, including two four time repeat State Champions. Professor Jones has actively and successfully competed in many open tournaments himself. He is a five time World Champion Self Defense Competitor and has been top rated in weapons and forms. He has won the San Diego Grand Nationals in Self Defense twice. His students are known for their speed and explosive power, as well as for their character. Students at East West International Black Belt Academy are also privileged to learn over 108 weapons in over 27 categories of techniques. Professor Jones teaches both beginning and advanced weapons applications to his students. Cane and Short Stick are among the many weapons with which Professor Robert Jones is proficient, in addition to the more traditional Kenpo weapons, the Kenpo Sticks and the single and double knife.

Professor Robert Jones has pioneered the development of a healing arts curriculum in Kenpo teaching his Black Belt students the traditional healing arts of bone setting, herbal medicines, acupressure, and acupuncture. In addition, Professor Jones is a pioneer in the development of an advanced systematic integrated curriculum studying pressure point and cavity press theory through the techniques of modern Wu Shen Pai Kenpo. Professor Jones remains active in teaching, researching, writing about, and developing his system of Kenpo and the healing arts applications associated with it.

Today Sigung Robert Jones serves as the President of the International Kenpo Karate Society. He serves on the Board of Directors for the United Martial Arts Alliance and is the System Head for Wu Shen Pai Kenpo, American Kenpo, and Jung Shin Do in that body. He is the Vice-President of the American Jung Shin Do Association and the U.S. Director of that body. He also serves on the Board of Directors for the United States Martial Arts Association where he is the Nevada State Representative. He is also the Nevada Representative for the International Martial Arts Council – USA. He is a lifetime member of the International Combat Kenpo Union, International Combat Martial Arts. He is certified through that organization as 7th Dan in Jung Shin Do and 7th Dan in American Kenpo. He is also a member of the ICMA Founders Union for his role as founder of the Wu Shen Pai Kenpo system, in which he holds a 7th Degree Black Belt. Dr. Jones is also the founder of the International Martial Arts College, an educational organization devoted to encouraging excellence in martial arts instruction. He also serves as President of the Board of Regents for the Wu Shen Pai Healing Arts Foundation, which serves as the certifying body for healing arts instruction in Wu Shen Pai Kenpo.

Dr. Robert Jones continues to serve his art and his students through the continued research and development of Wu Shen Pai Kenpo which he teaches at his headquarters school in Las Vegas, Nevada.

For more information about Sigung Robert Jones and Wu Shen Pai Kenpo visit his school website at http://www.unitedkenpokarate.com and the Warrior Spirit Martial Arts Academy listing on the Martial Arts Schools and Businesses Directory by clicking on the image on the left.