From August 16 -23, 2011, Blakely resident and longtime master of the Korean traditional martial art of tang soo do moo duk kwan, Grandmaster Robert Kovaleski led a team of 30 students from around the world to tour and practice in the “land of the morning calm”, South Korea. South Korea is the birthplace of the martial art style of tang soo do, tae kwon do and hapkido.

Accompanied by martial arts movie star and long time student Master Cynthia Rothrock and son Master Eric Kovaleski, Robert led his team to meet with and learn from the “grandfathers” and originators of the art and to trace back their martial roots in the arts history.

Grandmaster Yong Duk Kim (age 85) is the highest ranking martial arts master in the world today. He is the president of the World Moo Duk Kwan General Federation, with its headquarters in Seoul, Korea. He was the 1st student of the founder of tang soo do late great Grandmaster Hwang Kee. In our art all tang soo do black belts receive a dan bon or black belt pin number. For example Grandmaster Robert Kovaleski who started in early 1966, received the dan bon # 18174. Grandmaster Young Duk Kim’s dan bon is #2 meaning he was the second black belt in the art in all of its history, making him the most senior after Hwang Kee passed.

Grandmaster Hee Suk Choi (age 89) and dan bon #3 is the president of the House of Senate for the federation. Choi has the second highest ranking in the world today. He was the kicking instructor of the founder of “hapkido”, Ji Han Jae.

Grandmaster Kovaleski was tested and performed the “Hyungs” or traditional formations “Jion” and “O Sip Sa Bo” for the committee and also for Korean national television. Robert was awarded the rank of 8th dan (degree Black Belt) making him one of the most senior American Grandmasters in the US today. 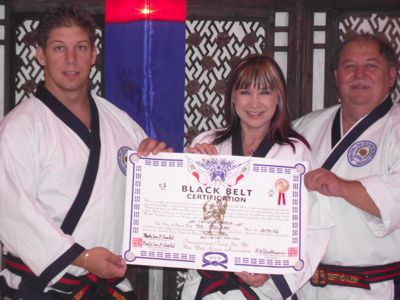 Master Eric Kovaleski was recertified through the federation and was awarded regional chairman of the World Moo Duk Kwan General Federation serving the north east region of the United States for Grandmasters Kim and Choi.

All participants were given the great opportunity to meet and study with famous Grandmaster Chang Il-Do who is well known in the film industry as “Bruce Lai”. Master Chang completed all of Bruce Lee’s movies after his untimely death. Students also had the opportunity to meet Grandmaster Hwang Jung Lee whom is very famous for fighting the legendary Jackie Chan in more the 15 films. Congratulations Grandmaster Kovaleski, you are an inspiration to all!